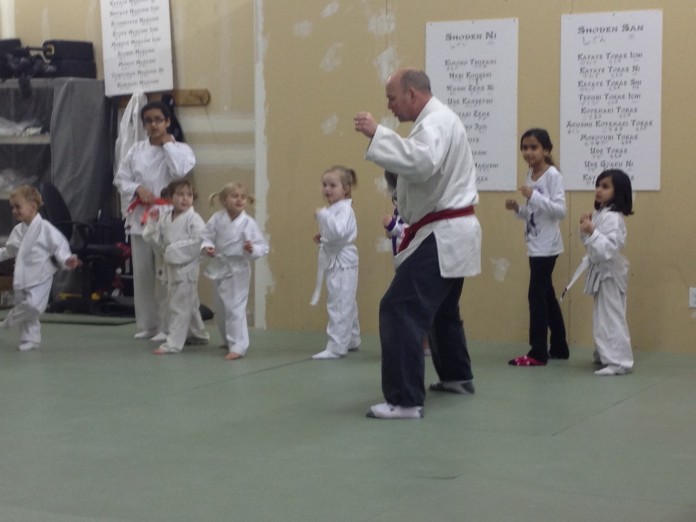 Those kids were fast as lightning

In fact it was a little bit frightening

But they fought with expert timing

Ok, replace the kung-foo with Jujutsu and the fighting with self-defense and you kind of get an idea of what takes place at Gordon Osberg’s home most Monday and Wednesday evenings.  The action takes place at Osberg’s personal “dojo” which is a Japanese term for a formal training place dedicated to martial arts.

I called Osberg about eight months ago to ask for his advice about registering my then four year old for martial arts training. Anyone who knows Osberg can attest to his gregarious personality. In typical Osberg style, he told me that he thought four was a little young but what the heck, let’s start a class! Osberg had been thinking about when to introduce his three year old to the art and “HUP!,” an informal class was begun. Within a week he had his first session for wee beginners. His passion for the art is a gift to our community as Osberg refuses compensation for the little ones because he thinks it’s just so much fun. He plans to hook them for life anyway.

Osberg is a Senior Vice President/Chief Credit Officer for Washington Business Bank by day and morphs into a Jujutsu Sensei at night? “A bunch of parents, just like what happened with you and the little ones here, started saying why don’t you teach my kid? Next thing you know I had a bunch of kids that I was teaching. Now I have a nice little adult class and about 12-15 kids.” At first glance, Monday’s class is a motley crew of kids ranging in age from five to around twelve years old. The age variety has been a huge asset as the older more experienced kids act as mentors to the younger ones. Everybody wins. 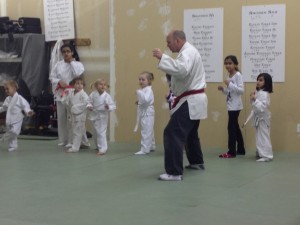 Seven seems to be the magic age for young children to manage the focus and determination needed for Jujutsu, yet Osberg is keen to start kids early. Monday evenings are filled with everything most young children adore: silly jokes, giggles, and lots of running around. “It surprises me how quickly they learn. I am very much a jokester with the little kids, but I am hard on the bigger ones. Yet they keep showing up,” describes Osberg.

“My goal for every kid is to get them to a very good foundation, to learn respect, to learn to love the idea of martial arts so that they’ll continue to show up and study because a magical thing happens when they turn 12, 13, 14 years old,” he continues.  “I’ve seen it over and over, knowing these techniques, having this awesome foundation and everything clicks.” Osberg is referring to an individual’s ability to react in a perilous situation, particularly for children and other vulnerable persons. 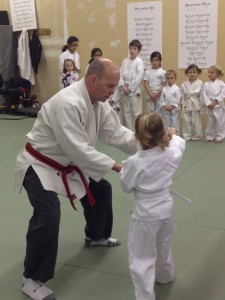 Osberg’s venture into martial arts began when he was in high school, but it wasn’t until adulthood that he realized the upshot for young people. “I took martial arts in high school and got a Brown Belt in a completely different system.” About fifteen years ago, Osberg recognized that his then five or six year old nephew needed some discipline. He thought some form of martial arts might be his nephew’s ticket to success. “I stopped into a place on the Westside of Olympia and talked with Osensei Michael Cerpok. He taught a form of Jujutsu, and he was a very good teacher.  I watched him deal with these kids. It changed my nephew’s life. He’s 21 now and a good kid. I started taking classes myself.” Four years later Osberg had earned a Black Belt and was asked to take over teaching adult students when his Sensei relocated.

Osberg’s program involves a series of forms and techniques that play to an individual’s age and skill set. His style of martial arts is known as “soft style,” where a person uses someone else’s motion against them. It’s self-defense, and it assumes that someone else is doing the attacking and trying to hurt their victim.

Despite the obvious benefits of any personal safety program, Osberg insists that Jujutsu is much more than self-defense. “Jujutsu creates self-esteem. When you work your way through the belts, you should feel pretty good about yourself.” So while it isn’t exactly kung-foo fighting, the art of Jujutsu is a rather nifty tool to have in your back pocket if you’re ever caught unawares. Empowerment, confidence building, and if you’re lucky enough to take it from Sensei Gordon, so much fun. Hup!