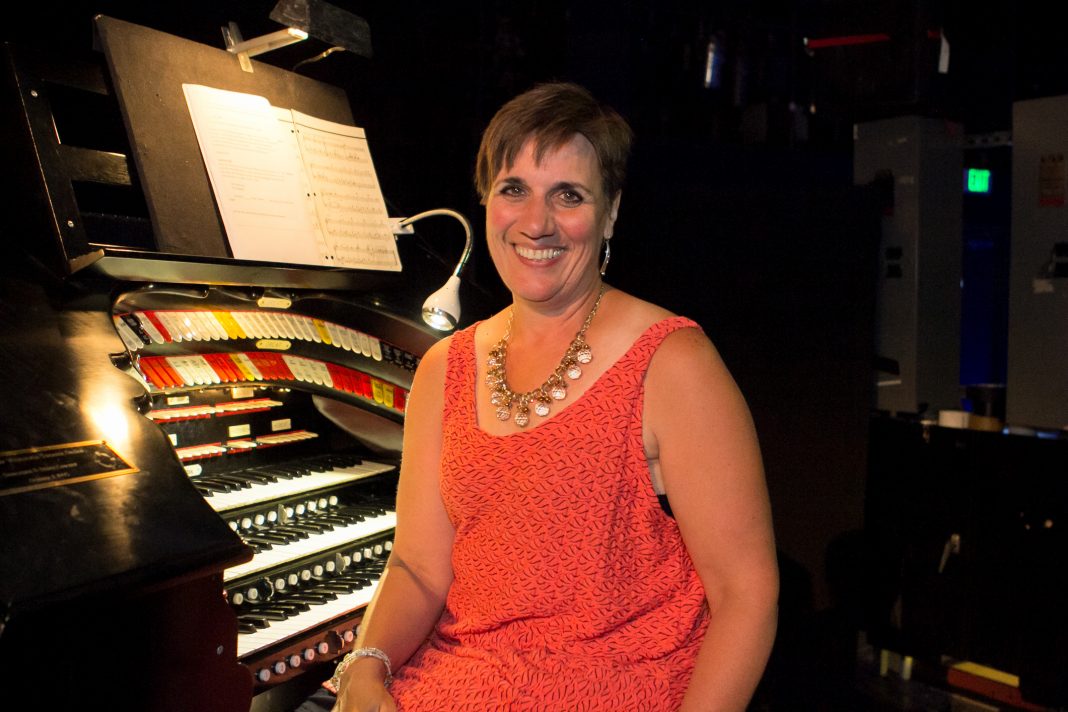 While most of us visit The Washington Center for the Performing for one show and head home, it does have one permanent resident: the 1924 Mighty Andy Crow Wurlitzer Organ. You can meet this 92 year-old marvel and hear it strut its stuff on August 18 at 7:00 p.m. during the annual free “Wonderful Wurlitzer” organ concert.

Organist Sharon Stearnes returns to The Washington Center this year to showcase the incredible instrument and delight audiences with songs spanning genre and time. From Disney tunes to Top 40 favorites, show tunes to classical masterworks, Stearnes will demonstrate the full range of the Wurlitzer.

Stearnes is no novice when it comes to playing the 1924 Mighty Andy Crow Wurlitzer or any organ, for that matter. She’s performed many times at The Washington Center but her history with the organ goes back to childhood.

“In the fourth grade my parents brought home a small organ. My dad only had one arm, so he’d play the left hand, using his right hand, and I’d play the right hand parts,” Stearnes recalls. “I fell in love with playing and started lessons in sixth grade.” Stearnes continued honing her skills through high school and in 1983, at age 19, began playing at then wildly-popular, “Pizza and Pipes” restaurant in Tacoma. She added shifts playing at the Seattle Pizza and Pipes where her skill at the keyboard landed her the job playing the organ at the King Dome for the Seattle Mariners home games from 1985 to 1990.

Stearnes time playing at Pizza and Pipes perfected her skills and earned her life-long friendships. The unique restaurant experience truly showcased the power and versatility of organs like the Mighty Andy Crow Wurlitzer at The Washington Center. “Usually you can’t see an organ or the pipes,” says Stearnes. “At Pizza and Pipes it was front and center. The pipes were exposed and had ribbons on the ends so people could see when they were played.” Theater organs are all manual, using only air to create sound making their sound incomparable to electronically created music on today’s modern organs.

Stearnes shares how she not only played music, but controlled lights, sound effects and the “toy counters” of the organ. “Toy counters is the name used for real instruments and noisemakers that are typically hidden from view, but are controlled from the organ. The Mighty Andy Crow Wurlitzer includes a whole host of these hidden in the rafters. The toy counters include noise makers, bird tweets, tambourines, gongs, a piano keyboard, harp, chimes, marimbas, glockenspiel and more,” she explains. “Air blows on them, controlled through the organ, and activates them to make a noise.”

This is just one of the many “secrets” of the great, old organs that Stearnes can share. And, knowing the organ’s secrets gives Stearnes the ability to ask the organ to do nearly anything. “Showcasing what these ancient instruments are capable of is one of my most favorite things to do,” she says.

The Pizza and Pipes chain is long gone and now Stearnes serves as music director at Gig Harbor United Methodist Church. While she does play the organ at church, theater organs such as the Mighty Andy Crow Wurlitzer are few and far between. “The Washington Center’s organ is one of the biggest in the region and I love to play it, really exploring all that it can do,” Stearnes says. The organ boasts three main keyboards and an impressive 20+ ranks (sets of pipes).

Stearnes is excited to return to the keyboard of the Mighty Andy Crow Wurlitzer organ, and this year is more meaningful than ever. On July 12, 2016 the namesake of the organ, Andy Crow, passed away. Crow was a champion of the arts, talented organist, organ restorer and the reason the 1924 Wurlitzer was preserved from the Liberty Theater and installed in The Washington Center today. His legacy of performance and promotion of the arts will live on through the organ, now with a permanent endowment to ensure ongoing care.

Stearnes and Crow knew each other well, meeting when she was a newcomer to Pizza and Pipes where Crow was a veteran staff organist. “I would go in to practice, bringing my homework with me, and listen to him every night. Andy was the most versatile organist there,” she recalls. “He played Led Zepplin and Michael Jackson, but really excelled on classical music.” Crow instructed a young Stearnes on how to play the immense instrument. “Andy was really a mentor to me. He was a wonderful, genuine guy who will be missed by the entire music community.”

Stearnes is excited for the August 18 concert and a return to keyboard of the 1924 Mighty Andy Crow Wurlitzer organ. Not only is the instrument a shining example of the powerhouse music of yesteryear, but it’s a lot of fun to play. “The last free concert was a monstrous hit,” she says.  “I was so surprised how many people came! I was just an ‘organ nerd’ in school and to see so many people enjoying the instrument I love is a joy.”

For more information on the concert visit The Washington Center for the Performing Arts online. To learn more about the remaining theater organs in our area, visit the Puget Sound Theater Organ Society’s webpage.