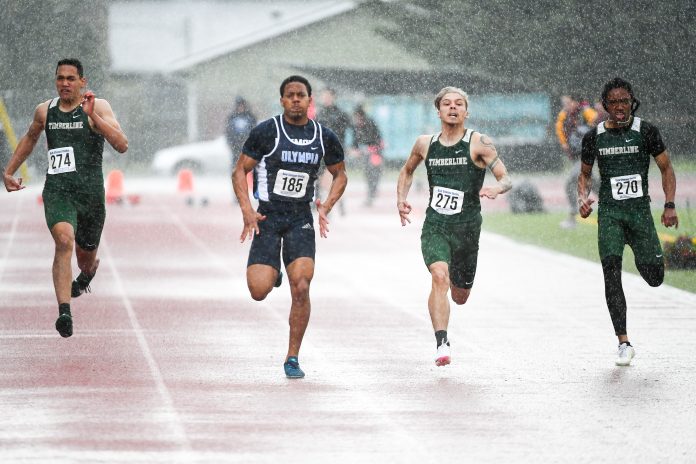 Nearly 200 local high school athletes gathered Friday May 6th at Tumwater High School for the annual Shaner Invitational track meet (full results). The meet is the last event for local track area athletes to compete before post season league, district and state competitions in May. The meet is also a great showcase for all local teams to compete.

Alyssa Duncan, from Tumwater and Brayden Platt, from Yelm took home the “athlete of the meet” honors. Platt threw a meet record in the javelin with a throw of 189’-08”. Duncan set a PR (Personal Record) in long jump with a jump of 18’-05” and took first place also in the triple jump at 35’-08”

Rainier High School national standout Jeremiah Nubbe set a meet record in the discus with a throw of 195’-07”. Throwing in the rain, several of Nubbe’s throws skipped and landed near the baseball outfield fence. Nubbe’s best throw on the year is 207’-4”.

Tumwater head track coach Tracy Johnson helped coordinate the meet, as Tumwater High School was the host school. “The meet was outstanding despite the heavy rain at times”, remarked Johnson. “We received thank you notes and compliments from several of the coaching staffs for having the meet again and all commented how nice it was to have so many local kids together again in one meet competing.”

The WIAA 2A, 3A, 4A State Championship Meet is May 26-28 at Mount Tahoma Stadium in Tacoma. WIAA 1B, 2B, and 1A State Track competitions are held May 26–28 at Eastern Washington University in Cheney.