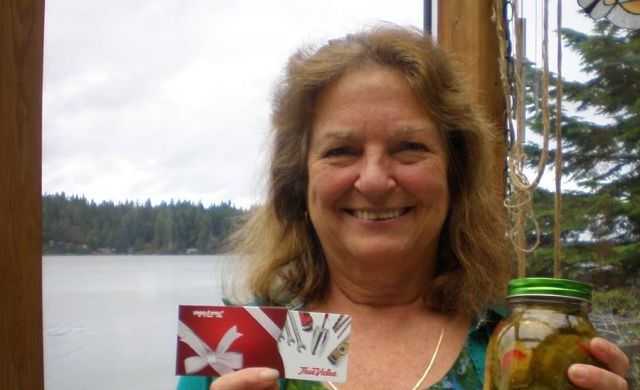 For the past three years, Leta Sperry has been impressing the judges at the Olympia Supply Company’s Annual Pickle Contest with a recipe she calls “Ole Quebec Bread and Butter Pickles.” It’s a family recipe handed down to her by her father in-law, who at the age of 89, has a long history of pickling every year for friends and family. The Ole Quebec recipe has won her the Sweet Pickle title for three years running, and while she wants to keep that particular recipe in the family, she has agreed to share her pickling tips, along with her highly sought after Dilly Bean recipe.

The first time Leta won the Pickle Contest, she was so proud of her achievement that she couldn’t help but tell everyone who would listen. When she won for the second time, she knew she had an outstanding recipe. Her prizes included a $50 gift card to Olympia Supply Company, which has an entire section devoted to home food preservation, and a large bag filled with canning supplies, many of which she still uses. This year, she was confident in her recipe, but remained cautiously optimistic. She was overjoyed to receive the call letting her know that she was still the reigning champion of the Sweet Pickle Category.

Canning and pickling has always been a part of family life for Leta. Her grandmother had a huge farm and canned everything she could to make maximum use of the harvest while preserving the flavors of summer and fall to be enjoyed throughout the year. While Leta still uses her grandmother’s pressure canner, it was her mother who taught her the most about food preservation. They started out with jams and jellies, and progressed to pickling cucumbers, tomatoes, and fruits.

Thirty-six years ago, as a young mom with babies to feed, Leta would can peaches, pears, and other fruits to make her own baby food. At the time, she was living in Yakima where fruit was plentiful, and her canning took off. During that time, she started canning tomatoes, often 30 to 40 quarts per year. She entered many of her canned goods into competition at the Yakima County Fair, now the Central Washington State Fair, and won first prize with her tomatoes, tomato sauce, salsa, and pressure-canned carrots and green beans.

Leta explained that highly acidic foods, such as tomatoes, can be canned in a hot water bath while low-acid foods like carrots and green beans require pressure canning to preserve them safely. When asked for tips about canning and pickling, Leta said simply “follow the recipe.” In the past, Leta has tinkered with some of her family recipes to try to reduce sodium or sugar, and the results have never been as tasty as the original recipe. That being said, if you want to deviate from the original recipe, take detailed notes with each batch, to document what works and what doesn’t.

Leta’s pickles and dilly beans are made from her homegrown organic produce.  According to Leta, it doesn’t make much difference which cucumber variety you use for your pickles, as long as it grows well in your area. She recommends Straight Eight Cucumbers in Olympia because they are well-suited to the climate in western Washington.

While Leta’s Ole Quebec Bread and Butter Pickles have won her accolades in competition, she also enjoys making dill pickles. Her favorite method for making dill pickles is refrigeration. Making refrigerator pickles is incredibly easy, and while they don’t last as long as canned pickles, they stay crunchy. The heat from canning cooks the cucumbers a bit, which increases their shelf life, but reduces their crunch.

Leta has always seen canning as an essential skill, and has made sure that her daughter and daughters-in-law have learned the art of preservation. Even if you will never need to preserve food to survive, canned and pickled foods make special homemade gifts. They also provide something of value to trade with your neighbors and friends for their cherished goodies.

Pack the beans lengthwise into hot Ball jars, leaving ¼ inch head space at the top of the jar. To each pint, add ¼ teaspoon of cayenne pepper, 1 clove of garlic, and one head of dill. Combine the remaining ingredients in a sauce pan and bring them to a boil. Pour (while boiling hot) over beans, leaving ¼ inch of head space at the top of the jar. Adjust caps onto the jars. Process the filled jars in a boiling water bath for 5 minutes. Let beans stand for two weeks to allow the flavor to develop.