Home History 40 Years of History at the Olympia Farmers Market 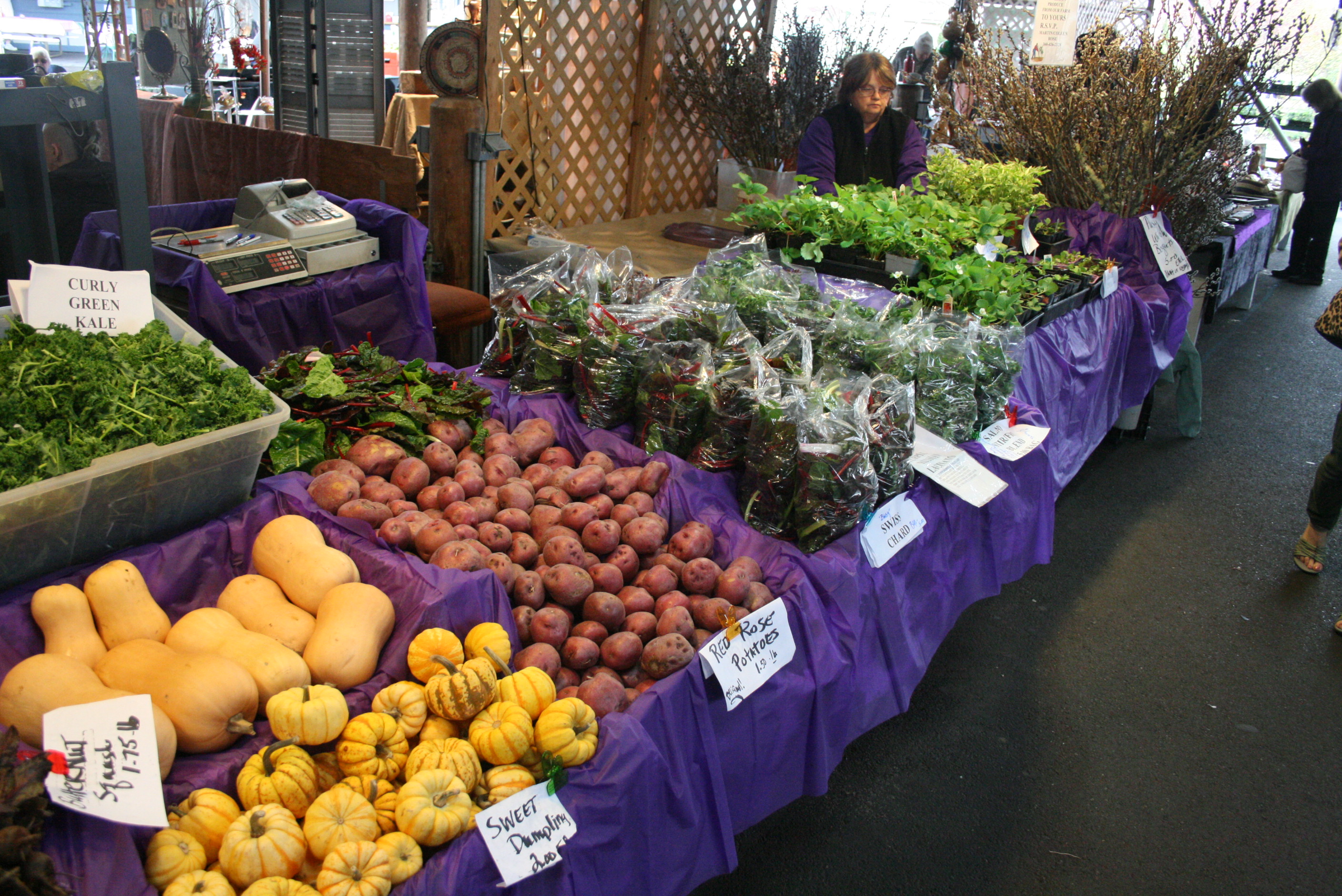 The Olympia Farmers Market has held an important place in the Olympia community landscape for the past 40 years. As the market’s season opens this year, it will be celebrating its fourth decade in existence.

But, the history of markets where local farmers sell direct to the public have a much longer history in Olympia, stretching back over 100 years.

The first farmers market in Olympia existed roughly from the 1910s to the 1930s. A 1912 article in the Olympia Recorder promoted the opening of an early public market:

Mayor Bridgford and members of the city council are confident (the public market) will be a great success and are trusting that the ranchers of the vicinity will be on hand with their supplies of vegetables and other farm products of all kids. It is the universal opinion that Olympia householders will patronize the market if the ranchers are in a position to supply their demands.

Much like the current incarnation of the market, early markets also had substantial official help from the city government.

These efforts continued through the 1930s when the supermarket trend finally swamped outdoor, direct to consumer farmer’s markets across the country.

The effort to revive the Olympia Farmers Market first came in the early 1970s. There are various references to when the modern Farmers Market began. One points to the organization “Retired Senior Volunteer Program” jumpstarting the new market in 1973. Another points to four farmers selling produce at the old community center at Bethel and State in 1974. Yet another points to farmers at the Lacey Village shopping center in 1975.

By 1976, 50 farmers got together and set down roots for two years on 7th Avenue near Capitol Lake. This location was actually a sort of homecoming for the market. Forty years before, another public market featuring local farm products had been located in the same neighborhood.

In 1978, the market finally settled down, finding a home on Plum Street across the street from Olympia City Hall.

Even across city hall, popular with the community, with two covered market areas and 60 vendors, the market in the early 1980s was a somewhat neglected feature of the city.

…(the market) once found itself homeless when its lot was put up for sale.

When a ditch was dug through property used as parking for market patrons, the downtown around City Hall became choked with marketers searching for parking.

Tempers flared. An Olympia City Council member walking through the market was chided by vendors and patrons alike for not doing something to help the market.

And, if Olympia didn’t know what a good thing it had going with its downtown market, Tumwater and Lacey sure did. Both cities (and even the Port of Olympia) made bids to attract the market.

Eventually, a site on Capitol Way at A Avenue opened up in 1984.

During those first years at Capitol Way and A, the market operated between both Olympia and Lacey on alternating days. But, if Olympia was learning to start supporting the market (putting $110,000 into improvements into the market in 1984), Lacey was forgetting why it even sought the market.

The Lacey version of the market migrated around the city. It went from a site on Sleater-Kinney to Pacific Avenue, eventually landing outside the city’s core at the Thurston County Fairgrounds. Constant movement eroded consumer support, and the Lacey market finally shuttered in 1989.

After another ten years at Capitol and A, the land was again sold out from underneath the market. The owners of Yard Birds put the land up for sale, and the market organizers looked just two blocks north for a new home.

The market’s new site at the north end of Capitol Way had historically been the home of two veneer plants, marking that place as the center of Olympia’s portside industrial history. But, those uses were nearly gone by the time the Farmers Market was shopping for a new home.

Moving quickly, the city council put a bond on the ballot to pay for a new home, but that effort failed when only 58 percent of the voters supported it. A 60 percent yes vote was needed to authorize new spending on the market. So, the council changed gears, and worked within their current budget to provide $850,000 for the market’s new home. The Port of Olympia (on whose land the new market sits) paid to prepare the site and paid $123,000 towards construction.

The impact of the market on the neighborhood was immediate. Anthony’s HomePort, a highly visible regional seafood restaurant, committed to opening a location next door once the market had signed its lease. Since opening, a new “Market District,” including retail shops, a restaurant and offices has opened across the street.

Today, the market itself is a thriving endeavor, welcoming more than 250,000 people each year across almost 150 vendors, with a gross sales of more than $5 million.