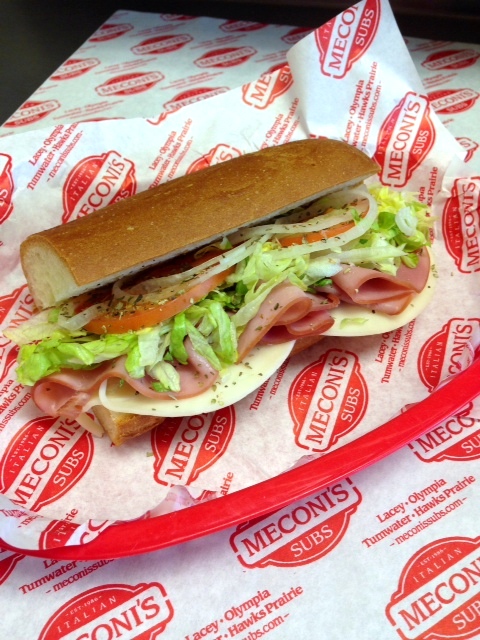 Last Wednesday I had my first Meconi’s Sub.  How is that possible, you ask?  With its four locations and well-earned reputation for the best sandwiches in Thurston County, how is it that I’ve never had one?  Well, I’m gluten free – bread, even the delicious, freshly home-baked Meconi’s bread, is not my friend.

Gluten is a protein found in wheat, barley and rye, and other grains in smaller quantities, which over time has become an increasing concern for many people’s health.  I do not have Celiac’s Disease, a serious condition affecting about 1% of the population, characterized by an abnormal immune response to gluten.  I have what’s called “gluten sensitivity.”  This means when I eat gluten, I just don’t feel that great.  Some people experience digestive symptoms while others complain of rash or respiratory congestion.

Increasingly, restaurants have begun to offer gluten free menu options for people like me.  This makes it much easier to enjoy a family night out or a special event.  Meconi’s has been aware of the trend, and need for gluten free products, for several years.  However, the cornerstone of their delicious subs has always been the bread.  Baked in their own local bakery each day and delivered fresh to the stores, Meconi’s subs are what they are because of the delicious sub rolls they are served on.

“We didn’t want to sacrifice the integrity of our sub,” shares General Operations Manager, Robin Vaughn.  “About 90% of people we talk to say that the bread is what makes our subs stand out.  It’s our real signature.”

While they have always had options for folks like me – delicious salads and their homemade chili – they knew that providing a gluten free sub roll was necessary.  “We’ve been working for over two years, doing research, baking test batches, trying to get the recipe just right,” shares Vaughn.

Having an experienced staff of bakers in Meconi’s own bakery helps.  Through each experiment, they sought not only great taste, but a texture and appearance that looked as close to the original Meconi’s roll as possible.  Anyone who is gluten free, like me, knows that gluten free bread is at best mediocre.  We toast it, add condiments to moisten it, eat sandwiches open-faced.  But in the end, it’s really not that great.  It ends up disintegrating before you’ve finished your sandwich and often, you end up leaving the dry gluten free bread on the plate and just finishing off the filling inside.

Not anymore.  I’m serious, folks.  I was in sandwich nirvana.

After years of not enjoying a chewy, moist, deliciously fresh-baked sub roll, I was finally eating one.  This is not sliced sandwich bread, but a roll with the chewy exterior and soft, but substantial, interior you’d expect.  “It was critical to us that we provide a real sub roll,” explains Vaughn.  “We could have launched sliced sandwich bread or a hamburger style bun long ago, but we wanted our gluten free customers to have the full Meconi’s experience, just like the rest of their family members.”

I ordered The Italian, one of their most popular sandwich on the menu.  For my very first Meconi’s sub I might as well get the favorite.  Just picking it up delivered an authentic “sandwich” experience.  The bread was substantial, but not heavy, and held the delicious ingredients all the way to the final bite.  Yes.  I finished it all. Every crumb.

Many people are curious about the recipe, especially those with more severe gluten allergies or concerns.  Meconi’s is dedicated to being as open as they can, providing the full ingredient list at each shop and answering any questions about preparation.  “We aren’t a dedicated gluten free bakery,” Vaughn is quick to note.  “However, we limit cross contamination of our gluten free rolls as much as we can.”

Each morning, the gluten free rolls are baked first before any regular baking is done and when the facility is spotless from the previous night’s thorough cleaning.  Rolls are carefully packaged for delivery before the day’s “normal” baking begins.

Careful practices are used in each location’s kitchen during prep of gluten free sandwiches and every effort is made to keep gluten free eaters safe.  If you have questions, simply ask when you order.  The friendly staff can answer, ensuring you feel safe in your choice.

“We are really excited to offer this to our customers,” shares Vaughn.  “We know this will allow some people to try us for the first time as well as allow families to come in and everyone can eat a sub.”  There is an additional charge for the gluten free bread ($1.50 for a half, $3 for a whole), but it’s worth every penny.

I’ve had The Italian.  I’m ready to head back to try another one of their customer favorites, The Combo.  This time, I won’t be the only one in the family eating with a fork.  I’ll dig in with both hands and a smile on my face.