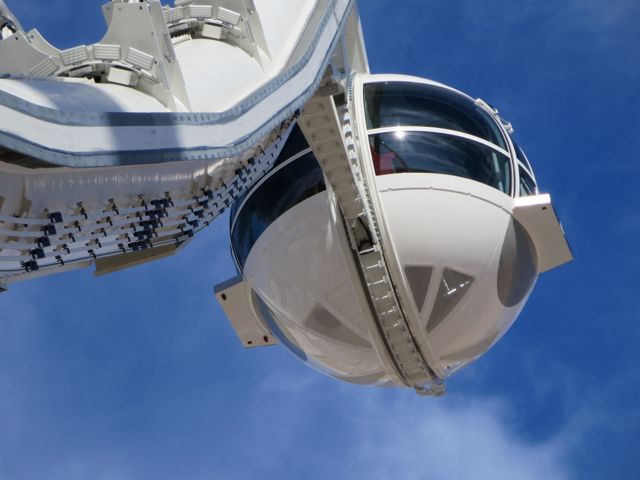 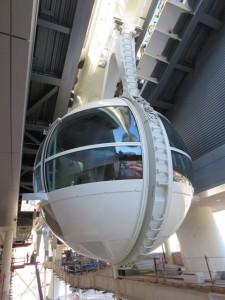 Our local ties to the High Roller are closer than you may think.  Engineers from Olympia based SCJ Alliance have been instrumental in the design and implementation of this enormous project, which plans to open by spring 2014.

This is not your carnival Ferris wheel. Appropriately called an “observation wheel,” It is being built for Caesars Entertainment Corporation and will dominate the strip skyline.  The size of this wheel seems unreal, but this is Las Vegas after all.

The wheel will have 28 air-conditioned bubble-like cabins capable of accommodating 40 people and each weighing 44,000 pounds.  Each 225 square foot cabin has 300 square feet of glass and is will be equipped with eight flat screen televisions. A trip around the wheel is expected to take 30 minutes.

The design differs from a traditional Ferris wheel in that the cabins ride on the outside of the wheel while the floor of the cabins remains parallel to the ground. “When the wheel goes around, the cabin moves on a bearing. So it’s rotating, but you don’t feel it,” explains Perry Shea, PE, and co-founder of SCJ Alliance. 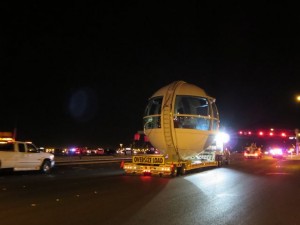 The design of these spherical cabins is an important engineering achievement and an example of a successful international partnership between SCJ Alliance and Leitner POMA of America (LPOA) whose parent company is based in France. This team is responsible for the design and delivery of the 28 cabins.

“Our role was to lead several key design components for the cabins on the wheel. And because LPOA had provided cabins for ski resorts, the London Eye and such, they had the experience and expertise to construct and fabricate these unique cabins. But this is a little different type of cabin, more of an entertainment ride. So with LPOA and SCJ both on the team, we collectively had the technology and fabrication abilities to do this,” explains Shea.

SCJ Alliance participated in the initial bid and proposal process that helped secure the contract from Caesars Entertainment Corporation. “We had four weeks to put together the proposal, and that created a lot of energy. We led that effort and participated in including the costing proposal,” comments Shea. 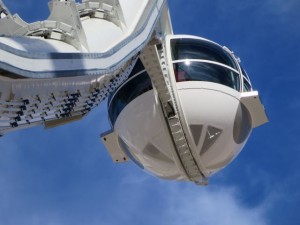 Once the project was approved, the SCJ Alliance team got to work. Their Colorado office, doing business as Engineering Specialties Group, took the lead under the direction of Office Principal Mike Deiparine, PE and Jamie Bunch, PE. “We were responsible for the audio/video system and the heating and cooling, which is significant especially in Vegas.  We helped with the 3D modeling and designing the sphere of the cabins.  We’ve been working on this for over two years.  The cabins are expected to be delivered in November” says Shea.

Shea continues, “The glass came from Italy, the interior shell from France, the bearings from Asia, most of the steel and many of the components from LPOA’s Grand Junction, CO facility – it really is an international project.  It was definitely an interesting team and dynamic.  We have assisted with the testing procedures and are leading the Operations and Maintenance documents which has been pretty fun.” 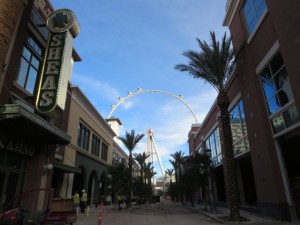 Working on such high profile projects is not new to the local Olympia firm.  Shea explains, “Our core practice is in the Puget Sound area, but we look for opportunities to find unique and challenging projects.  It creates synergy in the office, gives folks exposure to good projects and creates a good environment in the office that we are not a static firm.  We really love working on high profile projects.  We like variety.”

The magnitude of the High Roller is almost unthinkable, and such a project required a creative engineering answer. “There is not something that you can go to and just replicate.  This was really taking a concept and turning it into a reality without any other type of example.  It took a lot of iterations and intellectual learning and experience to figure this out and the partnership with LPOA was significant,” comments Shea.