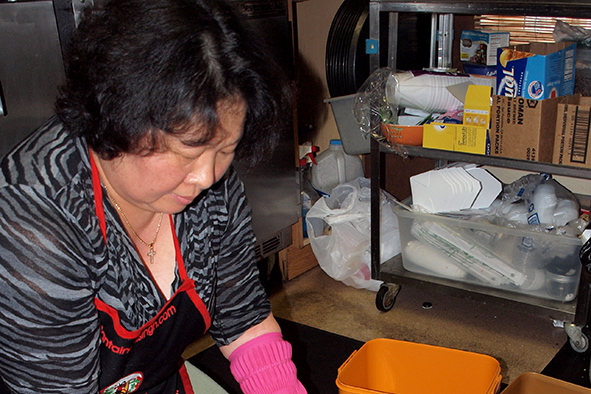 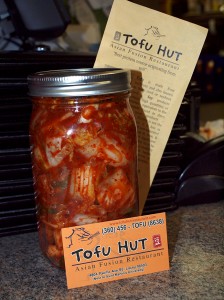 Kimchi-making is alive and well in Thurston County.

Korea’s national food, kimchi, can be eaten alone or as a jazzed up accompaniment to rice or noodles; it can go in soups, savory pancakes, and more. One could simply – and often correctly – call it spicy, fermented cabbage, but that doesn’t do this superfood justice. Proclaimed one of the “world’s healthiest foods” by Health Magazine in recent years, kimchi is chock full of good bacteria (lactobacilli), boasts vitamins A, B, and C, and aids in digestion.

Documentation of its existence dates back several hundred years—just imagine the variety of recipes (there are over 187 documented variations)! In fact, not all recipes use cabbage; geographic regions and seasons drive many of the recipes. Cucumber kimchi is a very popular variation during the summer time, as it has the effect of cooling the body.

As fermented foods in general are enjoying increasing popularity among the healthy eating set, I wanted to give it a closer look, and perhaps make some myself. While I have been eating kimchi since I was a child, I never, until recently, considered making it myself. Rather, over the years I purchased jars of various quality and spiciness from stores ranging from Fred Meyer (in the produce section) to more locally made batches at Arirang Oriental Market in Lacey. Most regular kimchi devotees will vouch for the better quality of the homemade versions that are available in quantities ranging from one pint to one gallon plus.

After researching numerous recipes, I grew intimidated by the process and the overwhelming variety of ingredients. I thought that if I could first observe it being made, I might be more likely to give it a go. This idea took me to the doorstep of a favorite Lacey restaurant of mine, Tofu Hut. Upon request, owner Soo Kim graciously agreed to share her secrets with me.

A little about the Tofu Hut

Armed with the belief that gluten-free and vegan-friendly cuisine could be delicious, Soo Kim launched the Tofu Hut four years ago as a worthy alternative to her belief that “the best way to ensure you are eating something good for you is to make it yourself.” Tofu Hut’s menu offers a bounty of freshly made vegan and gluten-free dishes. Using many of her grandmother’s recipes, Sue puts her own twist on many traditional dishes including such Korean, Thai and Japanese favorites as bi bim bap, bulgogi, pad thai, and teriyaki. Other healthier choice options include brown rice and steamed (not fried) pot stickers. And the addition of kimchi is always an option, at just $1 per side dish; plus, you can buy some to take home.

It also is worth mentioning that while the virtues of tofu are celebrated in name and on the menu, many dishes can be tofu-free with the substitution of pork, chicken, beef or shrimp.

Back to the kimchi…

Soo and Yong, a kitchen employee, talked me through kimchi making as I observed the second of the two-day process. (Tofu Hut makes 40-pound batches of kimchi roughly every 2-3 weeks.) For home purposes, Yong suggested I begin with just two heads of napa cabbage. Tofu Hut’s kimchi is based on Soo’s grandmother’s recipe but was adapted to be vegan. (Many kimchi recipes include non-vegan seasoning salts or shrimp or fish for flavoring.)

The Basics and the Secrets

Chop napa cabbage into 1-2” pieces then soak in salted water brine overnight to begin the process. Soo recalled her grandmother always advising that the water should be “saltier than sea water.” Cabbage is done when “a stubby piece is bendy.” In other words, a thicker, stalk piece will have some give but not quickly snap in half when sides are pulled toward each other. (Do not soak so much that it folds in half completely, though, or the resulting cabbage will be too salty and the texture will be less desirable.)

The ingredients in Tofu Hut’s kimchi are carrots, Korean (and/or regular) green onions, ginger, garlic, coarse red pepper flakes, salt and pepper, Korean radish, and liquid sweet rice (optional—see note below). “If you don’t have enough garlic or green onions, it won’t taste right,” cautioned Sue as she showed me the prepped ingredients.

Day 2: Rinsing the cabbage, soaking the radish and combining the ingredients

Soak the chopped Korean radish in salt water brine for a couple of hours. The radish should not be soaked as long as the cabbage or it will be too salty and lose too much of its natural flavor.

Using a large, very clean sink and colanders, rinse and drain cabbage in a depth of cold water three to five times. This removes the extra salt and some of the bitterness of the cabbage. By the third rinse, the water should be much clearer than water from the first rinse.

In a large tub and with gloved hands, combine all ingredients except the cabbage. (It is easier to mix if spices and smaller vegetables are combined prior to adding cabbage.) Once well mixed, add in the cabbage and mix until thoroughly blended.

Taste for flavor and adjust as appropriate. When sampling, your bite should include a bit of stalk, a bit of leaf, and a bit of radish to taste the balance of flavors. (Cabbage leaves will be saltier than the stalks.)

At this point, Tofu Hut stores its kimchi in special kimchi containers and holds it in a kimchi refrigerator, which maintains a more specific, reliable temperature that is better suited to the storage of kimchi. (According to Wikipedia, kimchi refrigerators are the most wanted household item of Korean housewives!) Glass jars will work fine for my purposes.

Many recipes recommend allowing the kimchi to rest for a week to allow the fermentation to begin but it can be eaten immediately. Kept at a consistently cool temperature (back of fridge storage), homemade kimchi will last for several weeks. Serve with anything or by itself; I like it best with rice.

Note. Regarding the liquid sweet rice, this ingredient is purchased as a powder and made liquid with the addition of water, and assists in faster blending of flavors for immediate service of dish. It is not a necessary addition for homemade product.

Note. Homemade kimchi or ingredients to make your own can be found at local Asian grocers including the Arirang Oriental Market on Martin Way (near Galaxy Drive).  For more information on local Korean farmers, read this article.