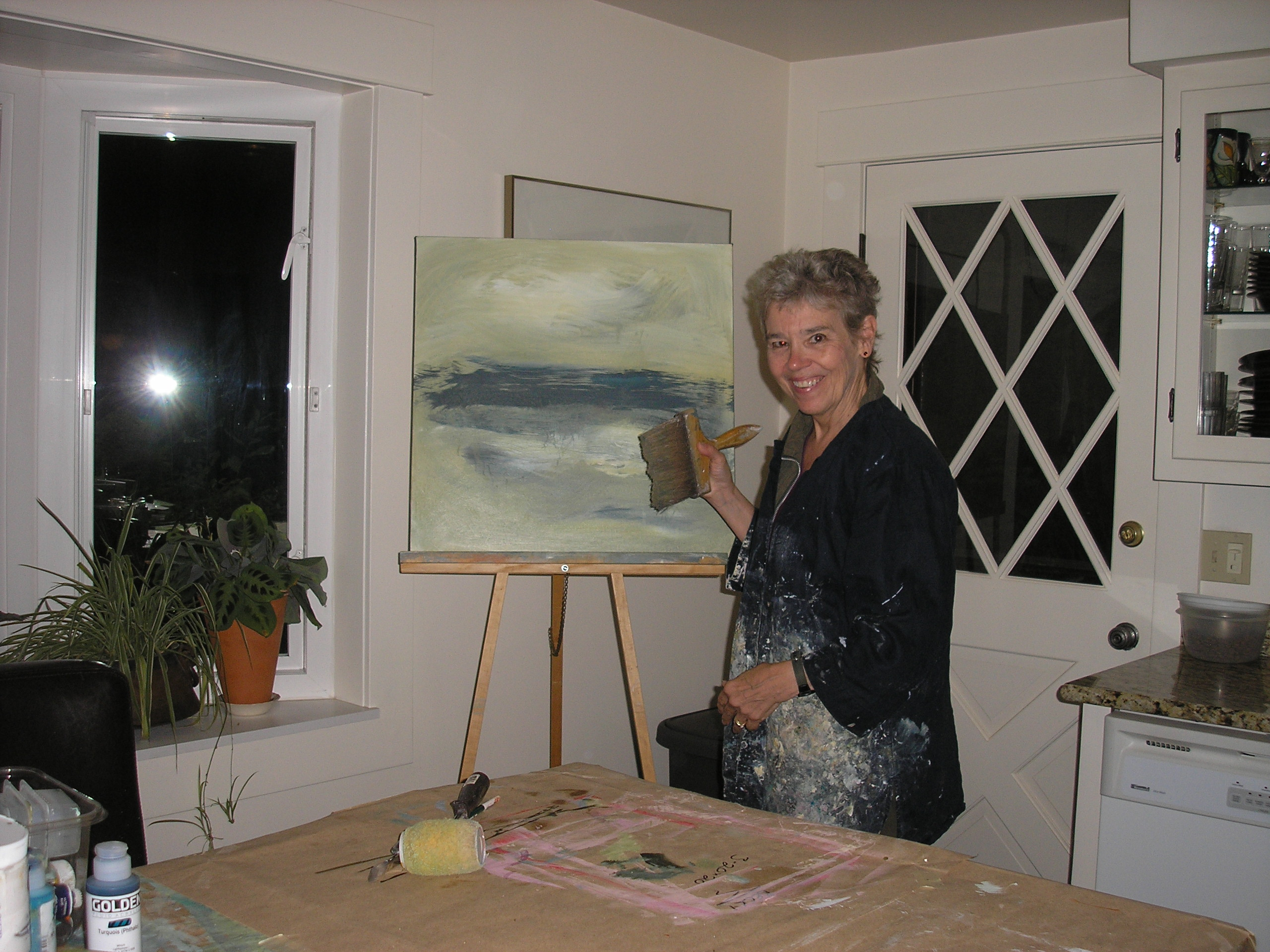 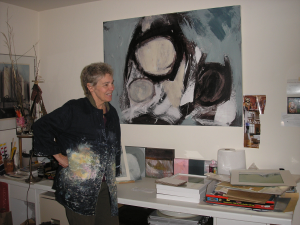 I get the impression that Becky Knold doesn’t know how good an artist she is.

She thinks of herself as a beginner and speaks of other artists with awe but doesn’t realize she’s just as good as they are. Perhaps that is because she has spent a lifetime looking at art and reading about art and talking about art — she’s even pulled together a group of friends called Art Gluttons to share their love of art. But only in the past half dozen years has she seriously worked on her own art, and only within the past year has she began showing her work in area galleries.

Becky says she has always been interested in art. She remembers taking the bus to the Corcoran Gallery in Washington, D.C.  to take classes in the basement when she was in the ninth grade. She remembers her mother letting her “mess up the kitchen” to make art. But she never took it seriously as something a person could do for a living.

She recalls that a junior high school teacher advised her to study architecture, presumably because that was a respectable way to use her artistic talent. In college she majored in Asian Studies at the University of Wisconsin. She thought at the time that majoring in art would be indulgent. It was during the Vietnam War and she was “relatively active” in the anti-war movement. But she did take a couple of art classes. 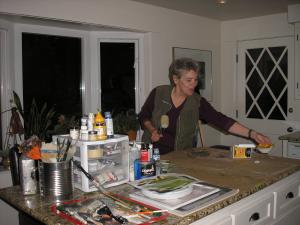 She moved to Olympia with her family in 1984. At that time she was a potter, and she taught a pottery class at the Coach House and later took a printmaking class with Peter Ramsey and a drawing class with Louise Williams at The Evergreen State College. These were summer classes, smatterings of art classes here and there but nothing full time. She was teaching English as a second language at St. Martin’s College at the time.

“A new life started at retirement,” she says. She retired from teaching in 2006 and started focusing on art pretty much full time then. “Just feeling it out,” she says. She entered her first show “just for practice.” And she got a painting in the show. It was the annual Eastside Association of Fine Arts competitive exhibition at the new Redmond City Hall. After the show opened she got a call at 7:30 one morning from a woman who said she wanted to buy her painting. Becky was surprised, to say the least. She said she guessed the woman should talk to the people at the show. The woman said that might be a problem “because of that big blue ribbon that’s on it.” So, she not only got accepted into the first show she ever entered, but she won the best in show award and sold the painting.

Becky works mostly at home where her workspace dominates her kitchen, deck and a bedroom that doubles as a studio. Compared to many artists’ work spaces I’ve seen these spaces are very neat and orderly. She also rents a garage studio that she uses two days a month. A lot of her work is done on a kitchen island. She says she thinks of it as “a small island in the Northwest that is conducive to the creative process.”

She likes working at home where she can do several things at once with the “pleasant distractions” of everyday life. “Between sautéing the onions and making spaghetti sauce I can put on another layer of gesso. By the time I add the mushrooms the gesso is dry.”

In this way her art is totally integrated into the rest of her life. She and her husband, John, are both retired teachers, and their two children are both grown. She says that when not making art she is reading about art or going to art galleries or talking about art.

Other than some portraiture and figure drawing when she first started out, her painting has always been abstract. She mentions talking with fellow artist Gail Ramsey Wharton about how you can walk down the street and look around and see that everything is abstract.

Becky’s paintings are simple, bold and often atmospheric, with what seems to be an innate feeling for spatial relationships and an inerrant sense of balance between gestural marks and background, between calm and excitement, opacity and transparency. These are things which many an artist spends a lifetime learning but which seem to come naturally to her.

When asked about her influences she said different artists have influenced her in different ways, and she lists some of them: Franz Kline, Robert Motherwell, Richard Serra, Richard Diebenkorn and David Hockney for strength of form; Rick Bartow, Mary Ann Wakeley and Cy Twombly for expressive line; Mark Rothko, Joan Mitchell and Alden Mason for luscious color; and Hiro Yokose, Morris Graves and Michael Schultheis for mood, spirit and mystery. Others who have inspired her include Willem de Kooning, Helen Frankenthaler and Michael Spafford.

In the few years since she began pursuing her art seriously she has racked up inclusion in more than 20 shows and has won awards in at least five of those, including a Juror’s Choice Award at the Tacoma Community College annual juried show, an Ampersand Award of Merit from the Olympia Art League, an Honorable Mention from the Peninsula Art Association juried show, and the previously mentioned first place and second place awards in the Eastside Association of Fine Arts.

Her first one-person show was last year at The Broadway Gallery in Longview, followed by an invitational at the Lower Columbia College ‘s Rose Center for the Arts in Longview.  This past month she displayed simultaneous shows at Flow Gallery in Tacoma and at Caffe Ladro in Kirkland.  For the month of July she is showing at Olympia Framemakers. She has also been invited to show this Fall in four-person invitational exhibitions at both South Puget Sound Community College and Pierce College Puyallup.