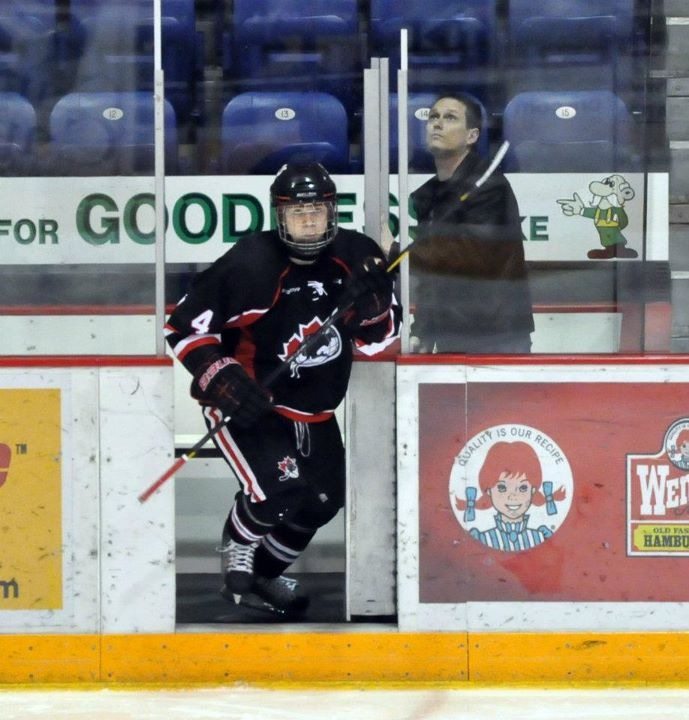 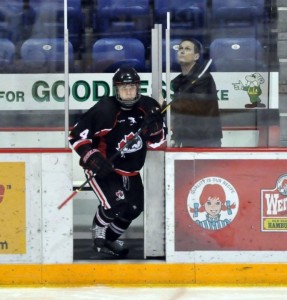 Olympia may be known for many things, however, being a city famous for its hockey talent usually doesn’t top the list.  No more.  Meet local Tyler Brown, just 15 years old and playing elite level hockey.

Sitting down with Tyler while he was in town for vacation, I had to remind myself that he’s just fifteen.  Not just because he is 6’1, but he was as composed and passionate about the game as someone much richer in years.

Tyler started playing on a local team in Tacoma, for Puget Sound Hockey, when he was just three years old.  He has always been a big kid, and “I remember him on the floor playing hockey before he could walk…with a regular sized hockey stick” laughs Andrew Brown, Tyler’s dad.  Tyler remembers always being around the rink and growing up on it, watching his older brother play.

Many parents shuttle their children to practices each week, but having a child who loves hockey, but lives in the Olympia area, requires a high level of dedication.  His family has rallied around Tyler, so supportive of his talent and passion for the sport, and made sure he was able to make his practices and games all over the state.

Currently, Tyler is living in British Columbia and attends the Pursuit of Excellence Hockey Academy.  Each day he starts practice at 6:30 am and spends two hours on the ice, and two hours on off-ice skills training.  In between practices he attends a local school and keeps up on his core classes.  Most weekends are spent traveling and playing games against other hockey clubs.   Sound rigorous?  You bet.  He lives with a billet family, or a host family, and with another student.  “Its like living with an aunt,” says Tyler, and the family has helped make his transition to a new town and school easier. 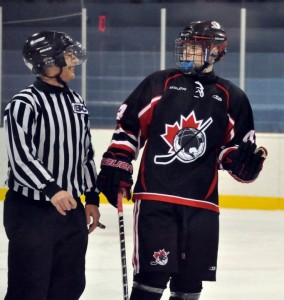 Going to Canada, where they have ice rinks like we have espresso stands, has proven to be a great move.  From his father’s perspective, “the difference compared to last year… as much time as these boys spend on the ice, getting up at 6:30 and done at 4:30, they have grown to become a family and its really nice.  These boys have really matured.”

Tyler seems to eat, sleep and dream hockey and takes his commitment to the game very seriously.  Taking any more than a couple of days off the ice seems unfathomable to him.  When he’s not practicing, he likes to watch junior league hockey games, watch movies and play video games with his friends.  His favorite subject in school is science, because he likes the experiments and thinking outside of the box.  It may be because his mom, Kristine Andrews-Brown, is a school teacher, but Tyler takes his schooling very seriously.

Tyler is a modest kid, reluctant to speak too much about his achievements.  His hockey highlights, so far, was playing for the national championship in Buffalo, New York last year with his Seattle team.  This year, his Canadian team placed fourth in the top tournament in Western Canada.  Being in those top games and exposed to other elite players has been a great experience.  He smiles with the memory.  What he isn’t boasting about is his consistent success in the sport, and past coaches that are so enamored in his personality and work ethic that they have adopted him and treat him as their own son.

Right now Tyler is focusing on playing physical and being a big presence on the ice, which is key for a defenseman.  He models his game after Tyler Myers from the Buffalo Sabres, because “he’s a big kid he has a really good poke check to knock the puck off the stick.  I try to resemble someone like that.”  Tyler’s motto on the ice is “keep it simple and things will come to you.”

According to Tyler, there is a different dynamic playing with Canadian teams.  “The Canadian teams are more puck possession as American teams like to be gritty in the corners and just attack”.  When he came back recently to play, the US teams were more heavy hitting, and the team had to adjust their game accordingly.  He has enjoyed playing on the Canadian team because there is “a bond of brotherhood”. 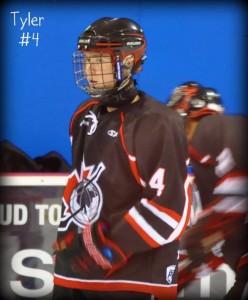 Tyler’s dad, Andrew, is his biggest fan and influence in his life.  “He’s been there for me” says Tyler.  His parents did not come from a hockey background, but are learning the sport through their children.  The whole family has embraced the sport and they have the beat up baseboards and broken barn windows to prove it.  His youngest brother, Bennett, is almost two years old and is Tyler’s biggest fan and already playing with hockey sticks.  His family and friends have rallied around Tyler, to provide mental support and encouragement and that support is obvious in his composed nature.  He is a mature young man who is determined to work hard and follow his dreams.

On May 3rd, Tyler will be eligible for the WHL draft, which would be a huge stepping stone in his hockey career.  I know I will be crossing my fingers for him and excited to see what is in store for our local red-headed hockey talent.  I know his family will be right by his side, cheering the loudest and inevitably making plans to drive out to his next game.