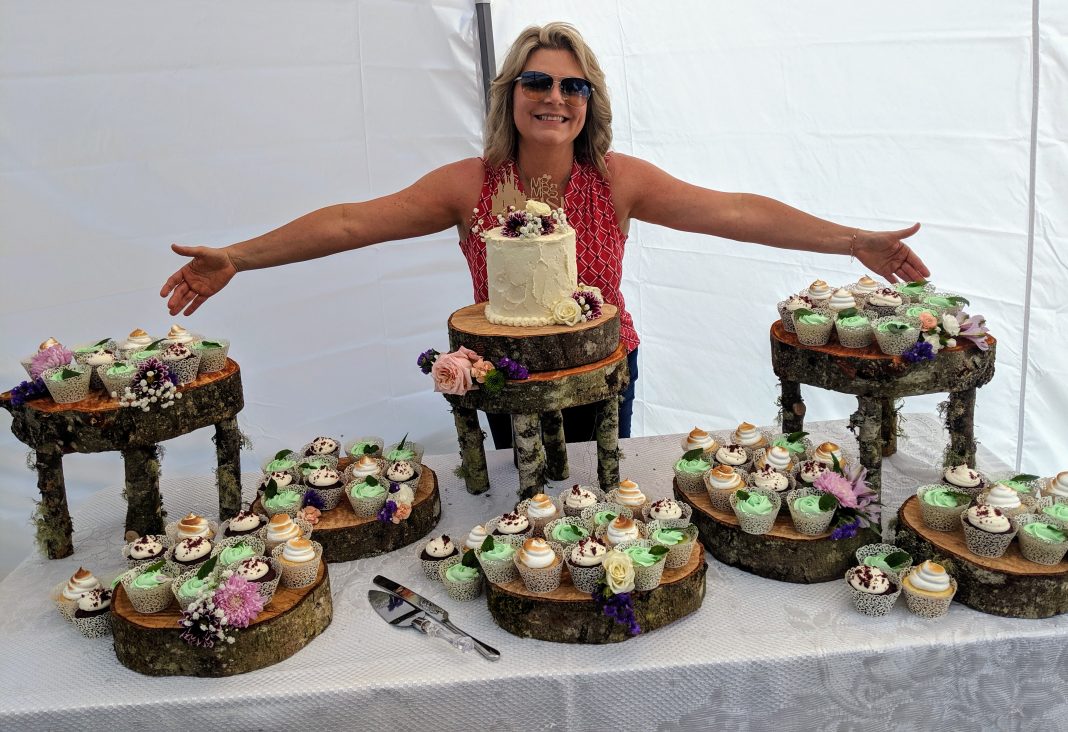 Here is something you may not hear from a baker often, “I actually don’t like cake very much,” Kathryn Zambrana of Olympia admits. But that is exactly the reason she started Kustom Cakes, and we are very lucky she did.

Kathryn, who goes by KC, has been cooking and baking her entire life. Her parents always cooked and baked things from scratch, using fresh ingredients. Growing up, she learned how to create delicious food and how important the ingredients where that went into them. But she didn’t immediately think of baking as a career. Instead, growing up in The Valley in Southern California, she decided to become a massage therapist.

Her family moved back to Washington State in 1996. “I never felt like a transplant,” she says of moving. “This was home.” And it makes sense. Her father was from Olympia. Her grandmother went to Olympia High School. And Young Road is named for her great-grandfather, E.T. Young. The Dofflemyer Point Lighthouse is named after her great-great grandparents. So, moving to Olympia really was like coming home for her whole family.

“I Love it here,” she says. “I don’t mind the rain. I love that everything is green. We really live in the forest and I love having trees around me and in California, everything was so hot and covered in concrete.”

The one thing she misses? “I miss the earthquakes,” she laughs. “I know it is sounds weird, but I do.”

Five years ago, her mother gifted her a cake decorating book. It was that book that inspired KC to start creating. But since KC isn’t really a fan of cake, she needed people to give her cakes to, so she started telling friends and family that she was making cakes. And her business, Kustom Cakes, grew from there.

“It’s really fun, you get to wear the apron and all the tools are really cute. The KitchenAid mixer is really cute,” she says. “I love being able to create something, like I really get inspired by other people’s ideas or flavors.” She mentions a cake that she recently made where a friend wanted a birthday cake but gave KC creative freedom. “I was out for a jog and I was looking at all the cherry blossoms. I was like, ‘Oh you know what those are so pretty, I really want to make a cake like that,’” she continues, “so then I just kind of know went with that.”

In the past five years, KC has been allowed to bring in her own creativity more than once, as she says often people are not sure what kind of cake they want. In some cases, they don’t care. “I had a bride and groom that came to me and they didn’t like cake,” she says, “so they didn’t really care what kind their wedding cake was. I made them a three-tiered cake for their guests, and then I made them an individual ice cream cake, just for them. That was a first and took some learning. And the keeping it frozen for delivery. But it turned out great.”

Not being a big fan of cake, particularly those bought at the grocery store, has probably made her a better baker. The frosting was always a big thing for her, it was too sweet. Known as American buttercream, its typically made with lots of powdered sugar and lard. Instead, KC perfected a Swiss meringue buttercream. “If you don’t like frosting, try a Swiss meringue buttercream,” she says. “It’s light and fluffy and not as sweet. It’s heaven.”

And because she grew up making things from scratch, you won’t find any boxes in her kitchen. KC makes everything from scratch, and uses fresh, local ingredients whenever possible, down to the eggs. “I get them at Spud’s or from a family farm,” she explains. Fresh ingredients do make a difference when it comes to texture and taste, and KC wants to make sure the cake you get is something special.

She is also able to cater to allergies or sensitives, if requested. “My daughter has a tree nut allergy so I completely understand the importance of those requests,” KC explains. “I am careful about cross-contamination when accommodating those orders.” 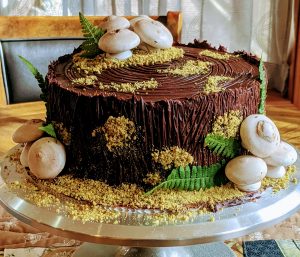 KC still juggles her baking with her massage therapy clients. She has acreage, so her clients come to a yurt she had built on her property. This past year, right as COVID hit, she almost purchased a bakery, but backed out at the last second. Now, she is hoping to expand into a kitchen space on her family’s property, where she can teach baking classes, and maybe be open on the weekend for specialty items such as cinnamon rolls. To achieve her dream, KC recently entered The Greatest Baker competition. “I entered on a whim after seeing the ad on Facebook or Instagram,” she explains. Voting starts on May 11 and people can vote once a day. Each week, bakers will be eliminated based on votes until the one baker is named The Greatest Baker on July 1, 2021.

The baker with the most votes gets a scrumptious prize: $20,000, a feature in Bake From Scratch Magazine and a chance to study with some of the most renowned bakers in the industry. To vote for Kathryn Zambrana, visit her profile on The Greatest Baker website.

Olympia Farmers Market is Bursting with Peas, Berries and the Thrills of Incoming Produce

Prayers for World Peace Sundays 10:00 – 11:15am A peaceful, contemplative time in your weekend. Join us for prayers for world peace and uplifting advice on how we can transform our day-to-day life into opportunities[...]
11:00 am Wild Grief Hike Habit at Sequail... @ Sequalitchew Creek
Wild Grief Hike Habit at Sequail... @ Sequalitchew Creek
Jun 27 @ 11:00 am – 1:00 pm
Join us for a 3 mile forested hike down to the beach and back on the Sequalitchew Creek Trail in DuPont. Every grief hike begins with an opening circle, an acknowledgement of who is here[...]
View Calendar

Through Rain or Shine, Precision Patio Covers Can Help Homeowners Get...

As summer arrives in the Pacific Northwest, South Sound residents are preparing for the season of outdoor living. And in many backyards, views of...

Olympia Farmers Market is Bursting with Peas, Berries and the Thrills...