It’s been just over 50 years since man first landed on the moon. As with any great accomplishment, the Apollo 11 mission took years of study, preparation and hard work. Today’s interplanetary explorers look to the moon—and beyond—but require partners here on earth to help replicate space missions in their own backyard. This is where Off Planet Research comes in. They craft simulants, feedstock and additives that replicate the lunar surface for scientific use.

Three years before the Apollo landing, scientists first took lunar samples, thanks to the Surveyor space probe. In 2015, Off Planet Research (OPR) became one of the few companies globally to replicate this material through crafted simulants that are a near-perfect match to lunar soil. “OPR simulates extraterrestrial environments for testing spacecraft and landed technology with a current focus on the lunar environment,” explains Lead Researcher Melissa Roth.

This is important for many reasons. “As engineers we know testing is important for increasing mission assurance, cost effectiveness, and to speed the development of space-based technologies,” says Roth. “We work with space organizations to test their products using our regolith simulants. We also conduct testing in our labs for organizations who do not have their own testing facilities or are unable to bring the simulant into their labs due to dust concerns. Our clients include national and international government agencies, private organizations, and research institutes.

Regolith is defined as “the layer of loose material covering the bedrock of the earth and moon…comprising soil, sand, rock fragments, volcanic ash, glacial drift, etc.” Roth admits that “A lot of people are unaware of what regolith is, the challenges it presents to human and robotic missions, and how lunar regolith and the resources within it can be leveraged to help sustain a long-term presence on the Moon and in deeper space. Lunar regolith simulants are materials made on Earth to simulate—or replicate—the regolith found on the Moon to be used in research and testing due to the scarcity and protection of returned lunar samples.”

“Earth soil contains organic material and the particles are formed by wind-blown and water processes which makes them relatively round and smooth,” says Roth. “The regolith on airless bodies such as the Moon have no organics, are not altered by moisture, and are entirely formed by impact and explosive processes; the regolith on the Moon is very destructive and hazardous to both humans and technology. It is abrasive like sandpaper and very susceptible to static charge due to its high surface area. Additionally, more than 60 percent of the regolith on the Moon is composed of particles that are quite fine, like those in talcum powder or cake flour. Due to all of these factors, regolith particles easily get into space suit joints or moving mechanisms of rovers and cause them to seize up.”

Thanks to a newly received National Science Foundation grant, OPR can expand their services. “This grant is to expand our icy regolith simulants and make the process portable and streamlined to provide this service on-site for our clients who are unable to travel to our labs.” A grueling eight month project, this opens up whole new lunar regions to study.

“In 2009, NASA’s LCROSS mission discovered ice in the Moon’s south pole after recording the ejecta plume from an impactor,” says Roth. “This ice is very different than the ice found on Earth and likely contains many components like water, hydrogen sulfide, ammonia, and methane to name a few. These are very valuable resources on the Moon that can be used to enable a long-term, sustainable presence on the Moon and in deeper space. For example, oxygen and hydrogen can be used in rocket fuel, breathable air, drinking water, and in agriculture. Much like testing lunar technology in regolith simulant before a landed mission, it is also important to test technology in icy regolith simulant if it is destined for regions of the Moon where ice is expected.”

When not providing simulants, performing research, creating their own hardware and technology, or travelling to clients and scientific conferences, the OPR team is active in their Thurston County community as well. They’ve done STEM and space outreach to local schools and hope to start virtual classroom chats this fall. They’ve presented everywhere from downtown Olympia’s Captain Little toy store to Seattle’s Museum of Flight.

We earthlings may be quarantined due to COVID-19, but scientific research to the stars continues. Even in our own backyard, the engineers at OPR are working to make the moon accessible and make the mysteries of space a little less unknown. Follow Off Planet Research on Facebook or LinkedIn to follow their progress.

We want to hear from you! We are launching an online Open House and survey starting Wednesday, September 17th to share the draft Thurston Climate Mitigation Plan and gather community feedback. Visit www.ThurstonClimatePlan.com to participate![...]
7:00 pm Artists Among Us (documentary se... @ Online
Artists Among Us (documentary se... @ Online
Sep 30 @ 7:00 pm – 8:00 pm 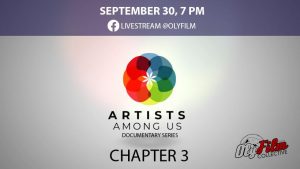 Artists Among Us (Documentary Series) – Chapter 3 Artists Among Us is a documentary series highlighting the local art scene in Washington State’s South Puget Sound region. Every month until October we will feature new[...]
View Calendar

Robot-assisted surgery is something residents of mid-sized communities rarely get to experience in the outpatient setting. Usually, they have to travel to larger urban...

The Historic Robin Hood Village Resort is Full of History and...