In the face of COVID-19 and recent stay at home order, parents and guardians may find themselves looking for activities that not only keep students engaged, but also provide information about local environmental science and concerns. In our South Sound GREEN Home Based Science Project series, we will introduce and demonstrate various hands-on and at-home activities for children of all ages to do either indoors or outside!

Project for the Stars

If you’ve ever looked up at the sky on a clear night, you have certainly seen stars. These stars are just like our sun, only much farther away which is why they look so small! Since the Earth never moves too far within our galaxy, the positions of the stars generally stay the same over time. This has allowed humans to rely on the patterns and position of the stars to create the first calendars, navigate at sea, and help explain the world through mythology and oral tradition.

As the Earth rotates around the sun, the arrangement of stars we see changes. In summer, the night sky is pointing in a different direction than it is in the winter. As humans observed the stars, they began to see outlines of larger shapes and patterns, known as constellations. Different cultures developed their own constellations, based on their own stories and histories. A common constellation in the northern hemisphere is the Big Dipper, officially known as Ursa Major. It is relatively easy to find the “spoon” shape in the sky and understand where it got the name “Big Dipper”, but Ursa Major actually translates to “Great Bear” a name given to the constellation by an astronomer who thought the stars looked like a bear. Today, we can look up at the night sky and see the Big Dipper, or Ursa Major, just like it was seen by humans thousands of years ago! Constellations not only tell stories, but can be valuable navigation tools – by knowing when you would expect to see a particular constellation, you can figure out directions based on its location.

While constellations are groups of stars that stay in one place, a shooting star is a relatively small piece of rock in space traveling very fast through the upper part of the Earth’s atmosphere, creating a lot of heat and light in the process. From Earth, this can look like a trail of light that may appear in the sky for a few seconds at most, and the shooting star, or meteor, itself may appear to be the same size as a real star. This is because a meteor is a very small object that’s pretty close to Earth, as opposed to a star, which is a massive object that is incredibly far from Earth. You can imagine this better if you hold up a coin and compare it to the size of the full moon – they may look the same!

On a dark, clear night, you may get lucky and see and see one or two shooting stars, but during a meteor shower, you can expect to see a lot more. A meteor shower occurs when a lot of meteors occur in a short time period and originate from the same source. The Perseid Meteor shower, named after the constellation Perseus, will be most visible to us between August 11th -13th this year. If you look up at the night sky this week, you may be able to see both a shooting star and a constellation! But what if you don’t live in a dark enough area, or want to create your own constellations? Then you can make a star projector! 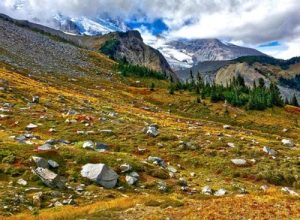 Spring and Summer are coming! Are you feeling antsy and looking at social media posts of beautiful lakes, mountains and vistas? Ever find yourself wondering if you can get there? Olympia Mountaineers experienced hike leaders[...]
View Calendar