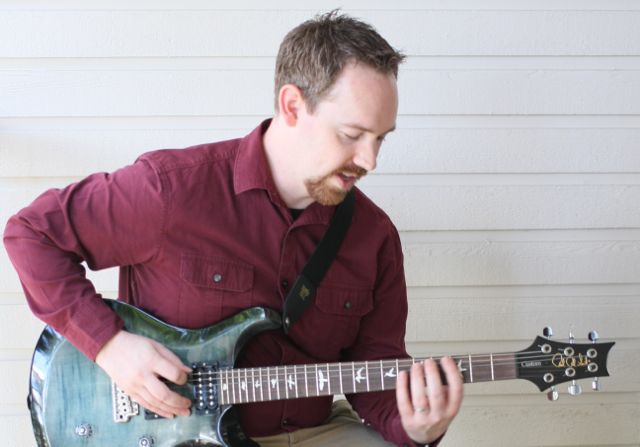 When Olympia resident Nicholas Anderson first took up the guitar in his teenage years, he struggled immensely as most beginning students do. He felt frustrated, down on his luck, and untalented. Yet, Anderson didn’t let these feelings hinder his progress as a musician. He only practiced more intently.

Anderson’s enthusiasm for the guitar led him to pursue and attain a master’s degree in music composition at Peabody Conservatory in Baltimore. He remembers rehearsing for hours upon hours on even the most mundane passages. Anderson knew there must be a more efficient method to practice – an easier path to achieving his dream of becoming a great guitarist.

Today, Anderson shares his wisdom and zeal with Thurston County residents who’ve sought out his training at The Olympia School of Guitar.

“My mission is to help people, especially people who’ve taken guitar lessons before and didn’t find much success, to realize that there are better ways to learn guitar than what are typically taught,” Anderson says. “I help people know what they need to do when they’re not sitting across from me in their lesson so that they can make the most progress on their own.”

Anderson notes that a musician’s success or failure often stems from their ability to practice effectively or not. He uses a sort of well-rounded, multi-dimensional system when coaching his students.

“A lot of teachers use a linear approach where you focus on one aspect of your playing for a certain length of time until you’ve mastered that, and then you move onto something else,” Anderson says. “I take more of a geometric approach where you’ll learn several different techniques at the same time, and then you learn how to integrate those things together.”

And, apparently, this system works exceptionally well. There is a student that has been working with Anderson for around six months, and she claims to have learned more from his instruction than from all her teachers in the last 10 years.

“There are a lot of guitar players out there who are stuck. They’re frustrated because they had this dream that they would be able to play their favorite songs, or play with their friends around a campfire, or be in a band, or write their own music,” Anderson mentions. He tries to reconnect those players who’ve lost some spirit or motivation to the reason they began playing guitar in the first place.

There was a time in Anderson’s playing career when he thought strumming an F-chord was the most difficult task to do on the guitar. Now, he says it’s one of the easiest things he could think of. It just goes to show that a lot of patience and a little diligence go a long way.

Music can positively impact us more than we might pay heed to. Playing an instrument or learning to read music may help you focus better, it could raise your intelligence quotient, and it allows for a beautiful, creative outlet.

For Anderson, the benefits of playing guitar have been plentiful. “Anecdotally, I was not very good at math until I started playing music, especially classical music,” he grins. “At a very practical level, especially for parents who maybe see their kids struggling at school, scientific studies have shown that music can help in this respect.” He also finds that playing guitar helps him relax after a stressful day.

The only thing Anderson loves as much as playing guitar is helping others learn the guitar too. He grew up in Olympia and believes that his work as an instructor allows him to reimburse the county that’s given him so much to be thankful for.

“I took guitar lessons at Music 6000 from a guy who still teaches there today. My root as a musician is here. In a way, things have kind of come full circle,” Anderson notes. “I went to college in California, then trekked over to the east coast and did my music studies there, and now I’ve come back here. I guess in a way you could say I’m giving back to the community what I took from it when I left.”

The Olympia School of Guitar

Clean Your Windows Like a Pro With Tips From Maid Perfect, Cleaning Services in Olympia

Clean Your Windows Like a Pro With Tips From Maid Perfect,...

You’re loving the sunshine coming through your windows, but then you notice fingerprints and filmy streaks and wonder, “How did they get so dirty?”...