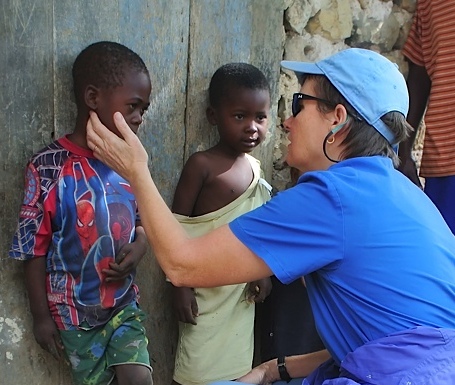 In March, I went on another medical trip to Haiti. (I think it was my seventh trip with Friends of Haiti.) We saw over 1400 patients in the short time we were in the village of Grand Boulage.  Most weren’t sick, at least not right then.  They all lived a hard life, without electricity or running water, or the everyday things we take for granted, like books or newspapers, or even a change of clothes.  We gave the residents vitamins, medicine against worms, soap, and toothbrushes.  We did what we could to help.

Some people we saw were quite sick, like the woman with third degree burns over much of her body after a kerosene lantern exploded.  One three month old baby died.  We coded him on the same table where, several hours later, we ate dinner. I have not yet gotten over the grief of that one.

The group of volunteers had real cohesion this year.  We felt that a strange combination of “This is fun” and “I am doing some good” to “This is terrible” and “I know nothing.”

One evening, I gave a talk on high blood pressure, attended by about five elderly Haitians.  We see a lot of hypertension in Haiti.  Afterwards, one of the participants asked me why it was dangerous to touch a person who had just had a stroke.  In Haiti, many believe that if you touch a person who has fainted, they will become paralyzed in the part of the body you touch.

The elders in the class have had no chance to go to school, but they know how to persevere despite hardships I cannot imagine. They may not understand human physiology, but they understand life. In many ways, they are the teachers.

Heartfelt thanks to all those who supported Friends of Haiti!

Stottle Winery is offering curbside, to-go, and delivery of its award winning wines. We are currently unable to offer tastings so instead we are offering free delivery on all orders over $80, and 5-10% off[...]
View Calendar

Cleaning Services in the South Sound and Beyond Respond to COVID-19...

COVID-19 is a world health crisis, and while many protocols are in place to help minimize the spread and exposure of this disease—social distancing,...