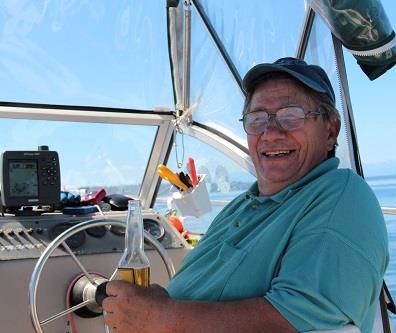 With beautiful images posted to ThurstonTalk.com’s social media page, Chris Hamilton has quickly developed a devoted fan base. He captures sunsets, Orcas, eagles, and iconic waterfront images of our area that take our breath away and remind us why we love living in Thurston County. But who is the man behind the lens?

I met Chris for lunch recently at one of his favorite haunts, Tugboat Annies. Over a burger and fries, Chris and I talked about his love of photography, his life in Thurston County, and the reason he shares his talent so freely with all of us.

Chris’ photographs center around the life he’s created in the tight-knit community of Boston Harbor where his parents settled in 1961. Born east of the mountains in Prosser, Washington, Chris’ family relocated to the state capital when his father, a lawyer, was appointed to the Supreme Court. Work in the law was a family business for the Hamiltons. Chris’ paternal grandfather served as the first democrat Attorney General for Washington State, holding the office until his death at age 86.

Chris attended Boston Harbor School where he was part of the final class to attend eighth grade in the small, rural schoolhouse before it housed only elementary grades. “We still gather today,” he shares of his classmates from the original school. He now resides along the waterfront near Boston Harbor Marina where his grassy yard faces west, perfectly placing him to capture the spectacular sunsets and wildlife shots he shares generously with ThurstonTalk.

Chris’ passion for photography first began while serving as a Special Forces soldier in Vietnam. “I took a lot of pictures while I was overseas,” he recalls. His unit was often deployed in the mountainous regions of the country where they visited small villages and interacted with the indigenous people. “Photography became a big part of what I did in Vietnam, both to document our missions, but also personally, to record my experiences there,” Chris recalls. He still has his original Vietnam camera equipment, though mostly for sentimental reasons.

“When I got back from Vietnam, there was a lot of curiosity about what I did and what it was like over there,” he shares. “So, I took my photos and did slide shows and presentations for people.”

His love of the art grew when he became the father of three daughters and photographed the adventures of childhood. “I was using standard 35mm film, of course,” he recalls. “It was so different then it is now.”

He, like many people today, discovered digital photography taking his passion to a new level. “I was an early adopter of the technology,” Chris says. “It was so cost effective to use digital. I could shoot as much as I wanted and my expenses stayed low.”

Adopting new technology wasn’t a stretch for Chris. Professionally, he worked as a young man for 10 years for the State of Washington as a computer programmer before opening his own computer sales and repair shop, Olympia Computer Central, on Martin Way. Throughout his career, for more than 30 years, he also served the North Olympia Fire Department as a firefighter/EMT, eventually serving as the interim Fire Chief.

Now retired, Chris applies his tech knowledge to his photography. While he uses Lightroom to process his images, he shies away from over-processing and editing. “I look at it as an art. I like using my natural eye and the beauty of nature and not relying on Photoshop to edit photos,” he says. He shoots with a Nikon D7100 and has lenses for every occasion.

When I asked Chris why he shares his professional-quality images so freely with others he smiled. “It gives me such pleasure to do something that gives others pleasure. If others enjoy looking at the photos, that’s really who I do it for. I’m not an artist or a professional. I’m just an enthusiast who loves taking pictures. And, I’m lucky enough to live (in a place) where there are endless things to take pictures of.”

Chris captures most of his spectacular sun and moon images from his own yard. When I visited him at home recently, he had his camera on a tripod with the shutter set to close every 10 seconds or so. As the sun sank closer to the horizon he would lean in and casually adjust the aperture and shutter speed as we chatted. It’s a ritual. One he does most nights followed by uploading to Lightroom, selecting his favorites and sharing with us through his Facebook page.

Other images, such as his incredible shots of the recently visiting Orcas and Mount Rainier are often taken from his boat as he cruises the South Sound waters. Others are taken around town, images of the Capitol or Olympia he can’t resist.

Although many have asked, he’s not interested in selling his work or making it a business. “I’m just thankful I get to share my work and that people get to see it,” he says. “That makes me truly happy.”

Enjoy Chris’ amazing photographs as he continues to generously share them with us through the ThurstonTalk Facebook page.

Washington State Department of Children, Youth & Families: Make a Difference in Your Community, Support a Child in Foster Care