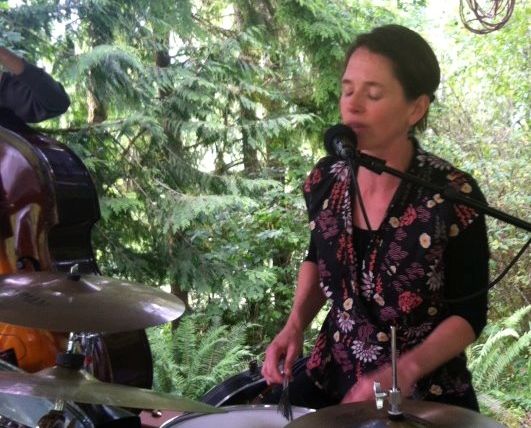 To Betsy Perkins, inspiration for her music often comes from the people around her – lots of young people that attend Meadows Elementary School in Lacey. As the Library and Music teacher, Betsy finds that lyrics are just as likely to pop into her mind while working in the garden as a tune is to find its way to her while reading a children’s book.

Betsy’s songwriting career began when she was in elementary school. “I wrote a song about my cat, Sammy,” she recalls when speaking to a roomful of Meadows Elementary School students. Now, decades later, Betsy’s songs are taking a more cultured turn but still focus on the influence of animals and nature in her life.

Inside Meadows Elementary School, Betsy was originally a classroom teacher before transitioning to a full-time music teacher. Now, Betsy splits her time between teaching music and serving as the librarian.

“There is a whole new crew of students that excel in technology and music that may not be visible in the traditional classroom setting,” explains Betsy. “Music and dance is a really good outlet that allows different students to shine.”

Selfishly, Betsy feels that her teaching role has made her a better musician outside of the school.

Betsy hasn’t always been a singer, songwriter, and music maker. A native of New Hampshire, Betsy made her way to Lacey via The Evergreen State College. Betsy’s mother encouraged her interest in the arts by signing her up for a variety of dance, music and art lessons.

“I was fortunate to be involved in dance and to play clarinet and piano as a kid. I kind of went away from these things for awhile as a teenager but then returned to it when I moved to Olympia,” recalls Betsy.

Betsy, a member of a variety of local bands, credits local musicians as being her main teachers. “I learned music with people who were better than me and would show me things. I’m amazed that I’m teaching music from the gifts of the Olympia community,” she says.

In Bevy, an all women 7-piece jazz band, Betsy sings and plays percussion. The band started in 2001 as a way for women to practice together. The group performs around town, including a few stints at the Olympia Farmers Market.

Artesian Rumble Arkestra is a mobile band where Betsy shares her percussion skills. The band can often be seen in parades since all of the instruments can be carried.

“When I first rejoined a band, I started as a drummer,” recalls Betsy. “I used to sing a lot as a kid but I had stopped singing. I got comfortable as a band member and then I started singing again.”

Then, she progressed into songwriting. “Sometimes the lyrics come first. I think of something poetic and then craft the melodies. And, sometimes it’s the other way around,” she explains and adds that a song could take her a few hours to write or up to two years. She recently performed a concert of original music at The Washington Center that was a few years in the making.

“I think about music better when I play the piano,” says Betsy in response to the question about her favorite instrument. The owner of countless musical instruments, Betsy also has a fond spot for an upright bass that she purchased as a 40th birthday gift.

In all, Betsy says that she has probably written about 25 songs. Her current favorite is a complicated tune about a Grackle, a colorful, noisy bird. Betsy describes the loud calls made by the Grackle and explains that the complex piece of music has been a challenge for her band.

Betsy has composed some original tunes for Meadows Elementary School students. Beyond hoping to record an album one day, Betsy also would also “love to write a big children’s musical.”

By far, the most impactful experience of Betsy Perkins’ music career is when she “locks in” with other musicians. Whether it’s an energetic fifth grader or an accomplished adult musician, Betsy says that her “joy is playing with other people and feeling that excitement in the audience. We can all talk at once with music and then feel connected to each other.”

*Author’s Note – a special thank you to the fantastic students at Meadows Elementary School for helping craft interview questions and enabling us to all learn more about Betsy Perkin’s talents. This article was part of the P.I.E. relationship between ThurstonTalk.com and North Thurston Public Schools.