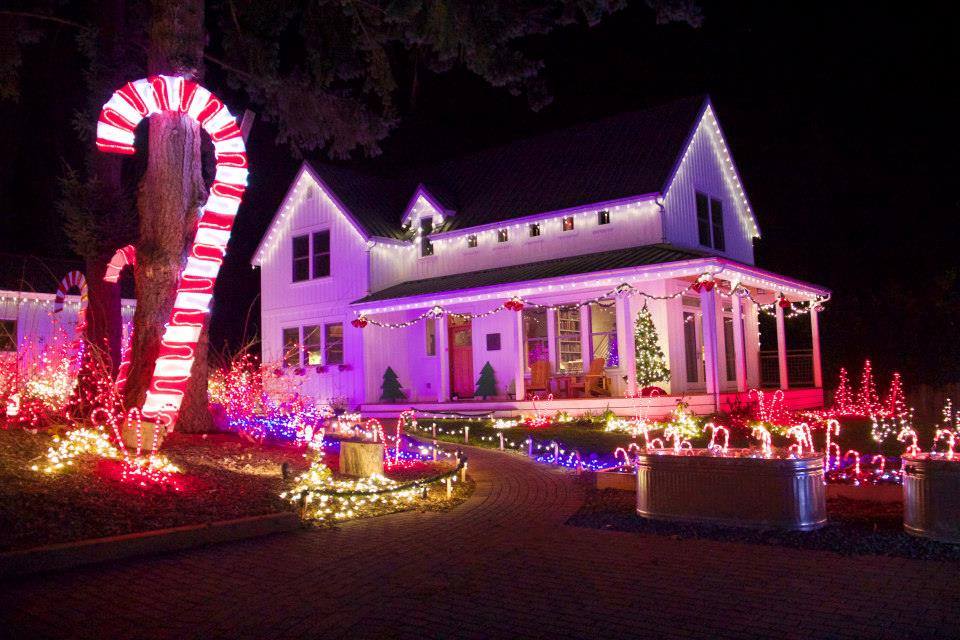 As I drive through the darkened streets each evening, shuttling my kids to activities or returning from work, I’ve noticed the holiday lights are already going up.  They make me smile.  Lighting our homes during the darkest time of the year is a perfect example of doing something simply because it’s beautiful and makes people happy.

And if you want to get really happy, visit Olympia’s Eastside Neighborhood starting November 30 and light up your night at the Oly Lightstravaganza.  Located on the corner of 10th Avenue and Central Street SE, Oly Lightstravaganza began many years ago and several blocks away, when Whitney and Luke Bowerman began to add Christmas cheer to their neighborhood through lighted displays on their home.

“I’ve always liked Christmas lights and Whitney has always had the same fascination,” shares Luke.  “And, you know, Washington is just really dark.”  People responded positively over the years to the growing display and as a result, the light show expanded.

Now, after three years in their new location, the display has grown in size and reputation and stands as one of the “must-see” displays in Thurston County.

“We are both really creative people,” shares Whitney. “We needed an outlet.  This was it, and like all things in our lives, when we do it, we are all-in and over-the-top.”  And while the 40,000-light display may be a true extravaganza, the Bowermans are committed to constructing physical elements of the display themselves, often from salvaged materials.  The vibe is one of hand-made quality – very Olympia.

One unique, and intentional, feature of Oly Lightstravaganza is the welcomed interaction with the display on the yard’s winding paths.  “I really like the idea of people getting out of their cars and coming up into the yard – having a conversation,” shares Whitney.  “And the kids just love getting up close to it all.”  This philosophy extends beyond the holidays.  “I think it’s something we all could do more – get out of our cars and out from behind our screens and just talk with each other.”

One opportunity for interaction is the Cookie Shack.  Open Sundays and other select nights throughout December (full schedule here), the Cookie Shack offers visitors home-baked cookies and cider free of charge.  “In a moment of brilliance years ago, it just came to me that we needed a Cookie Shack,” laughs Whitney.  For many years she baked all the cookies herself.  But with increased popularity, and two toddlers at home, she began accepting baking help from close friends.

While the cookies and community building, including their fantastic Facebook page, are Whitney’s major contribution, Luke is all about the lights.  With 40,000 lights planned for this year, it will be the biggest display yet.  When I asked for details the couple laughs, “Oh, we can really geek out over lights!”

Commitment to environmental impact and conservation (their home was green-built) are important to the Bowermans.  “We use commercial grade lights that we buy online,” Luke explains.  “They last year after year outside in the weather and result in a lot less waste and breakage.”  Nearly all the lights used in the display are LED and cost the couple only an estimated $100 extra on their power bill for the entire annual show.

“LEDs are amazing,” explains Luke.  “Incandescent lights can have three strings in a series.  LED lights can be strung with up to 73 in a series.  This impacts how we  create with the lights and makes the display a lot safer.”  For a full explanation on the topic, see the terrific notes on their Facebook page here.

Luke and Whitney (but really, with two little ones, it’s mostly Luke) began putting up the lights around November 1.

Whitney describes Luke as the visionary.  “The display isn’t planned fully in advance.  It evolves,” he explains.  “It’s kind of a puzzle to figure out where to fit stuff and how to send power from one corner of the lot to another.”

It takes 40 to 50 hours to fully assemble the display that will open November 30, directly following the Downtown For The Holidays celebration and parade.  Take down is much faster.  In about 15 hours, the whole light display is tucked away for the season.

She loves the lights, but Whitney shares, “my favorite part is the people we meet and the charity we support.”  Donations of non-perishable food or cash for the Thurston County Food Bank are collected in the donation box next to the sidewalk.  Last year over $1800 in cash and donations were collected.

During the coming month, plan a visit with your family to the Oly Lightstravaganza.  Park the car, walk hand-in-hand, and immerse yourself in the holiday dream world the Bowerman’s have created, connecting our whole community by simply making people happy.

Oly Lightstravaganza By the Numbers