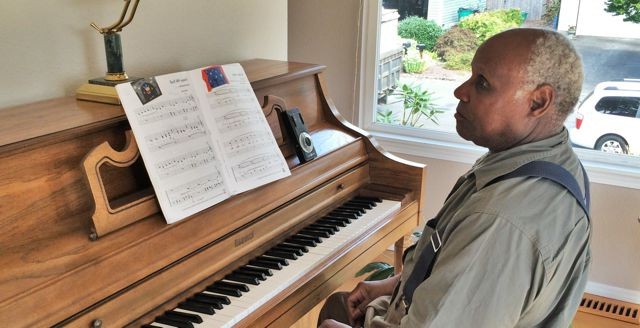 John Grace has owned his own one-man piano tuning business for over 50 years. As impressive as that is, there’s more – he’s blind. Due to early cataract, an eye disease in which the lens becomes covered in an opaque film that affects sight, eventually causing total loss of vision, John has been blind the majority of his 83 years. By the time he was two, his sight was completely gone.

However, he still manages to visualize what he’s doing. “I’ll put it to you this way,” he said. “When you sleep at night you have dreams and visions, and in those visions and dreams you see everything as you would see it if your eyes were open. My situation is no different than yours. I visualize everything around me, where people are sitting and, as I talk, I have an idea of what size my surroundings are by observing the sounds.”

Clearly, it’s John’s avoidance of self-pity and doubt that has let him live such a full and active life. Much of this positive outlook and can-do attitude stems from his childhood, where, as one of 17 children – which he described as his “small” family – he was treated the same way as everybody else. “My parents didn’t put me aside and do things for me. I learned to do as everyone else learned to do and there was never a question about whether I could do it or not,” John explained.

Early on he learned all the basic skills: how to feed himself, dress himself, and how to read and write in Braille. “I would often observe [with sound and touch] what my father or mother or sibling was doing when they were working on a project. Then, when they were done, I would examine it, gather the necessary supplies – be it sticks or boards – and then try to duplicate what they had done,” said John.

After moving around a lot as a child, mostly in the state of Georgia, John eventually moved to Vancouver in 1956 to attend the Washington State School for the Blind. It was here that he would find his life occupation.

“I got into tuning because I was looking for something to sustain myself in life,” he explained. He completed two years of technical training, “as anybody else would have” he mentioned, stressing the fact that his situation doesn’t give him the right to special treatment.

After he finished his training, he was hired as an assistant instructor at the school and worked there until 1962, when again he was on the move. This time he landed in the spot that would become his home for the next 50+ years, Olympia.

Right away, he started working with L.W. Hyseum, a piano tuner whose bad health had him looking for someone to take over his clientele. After working with John, Hyseum planned to turn over his business to him when he died, which ended up being just a mere six months later. “From there, I developed the practice by building my own clientele, mostly through word-of-mouth and by networking with other technicians and music teachers in the area,” John said.

Even after 83 years of life and more than 50 years of piano tuning, John hasn’t slowed down too much. “I still train several technicians but I’ve cut down on how many pianos I service, now only two or three pianos a day, so I can leave some time for relaxation,” he said.

In his free time, John sings and plays the piano for fun, mostly spiritual and gospel music. He also does a lot of playing and performing at his church, New Life. One of his favorite pastimes is observing. “I observe the area, the residences as I go in them. I like for things to be described to me as I’m driven down streets and I visualize what my surroundings might look like,” John said.

Although his family never gave him very much special treatment, they’re still inspired by him. “He’s always been an inspiration to me growing up, the things he’s done and the things he’s accomplished in his life are amazing,” said his nephew Lucious Owns, who helps him move pianos.