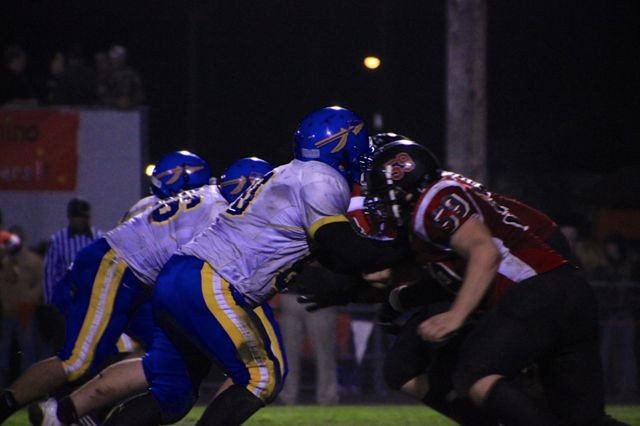 On Friday night, more than bragging rights were on the line. The Rochester High School football team would be facing off against the Tenino Beavers in the 1A Evergreen regular season finale.

The two Thurston County schools were tied atop the league standings heading into the match-up.  The game was the deciding factor for which school would host an opponent as a higher seed in the first round of the district playoffs.

Fans filled the stands of Beaver Stadium while overflow spectators took to a recently erected grand-stand or their cheered from their vehicles, lining the west end of the field.  It was the perfect atmosphere for such a game, and the play on the field lived up to the hype as well.

The host Beavers brought the league championship to Tenino following their hotly contested 37-27 victory over the Warriors.  After starting the season 0-3, Tenino has won five of six games to close out with a 5-4 and 5-1 overall and league record respectively.  Rochester, who came into Friday’s game with a record of 6-2 (4-1 in league), flipped their fortunes from 2012, when they finished the season 2-7.

Next weekend, Tenino will host a district playoff game while Rochester will be on the road.  The time, location and opponent of those games has yet to be determined.

You can read more about the Beavers season turnaround here as well as Rochester’s new head coach in this article.