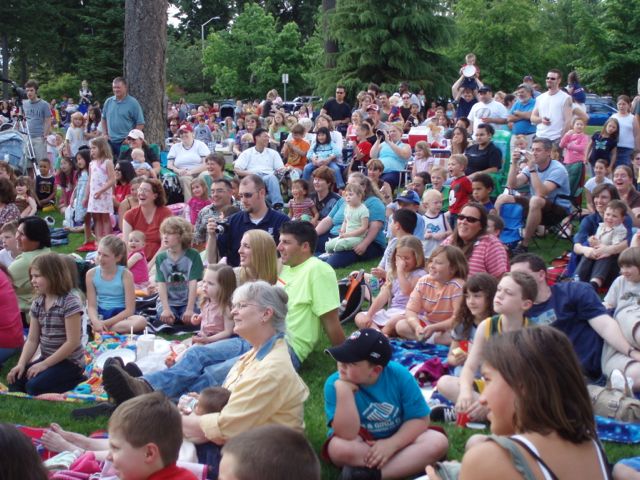 What do Elvis, the Beatles, an American Idol alum, and the Lorax have in common?  They’re all participants in this year’s ‘Lacey in Tune’ summer entertainment series.

Beginning the last week of June, Huntamer Park is transformed into an entertainment space for movies, gaming, concerts, magicians, reptile shows, and events for all ages.

‘Lacey in Tune’ began in 1995 as a way to bring the community together, reveling in sun, music, family-friendly entertainment, and the beauty of Northwest summers.  By choosing Huntamer Park, located within Woodland Square Loop, the natural amphitheater and centralized location provide easy access for state workers, college students, Panorama residents, and families to enjoy the shows.

After an initially improvised stage and make-shift movie screen, the Huntamer Park location was slowly developed into its current glory.  Restrooms and climbing rocks were added in 2005 and in 2007 a retractable movie screen was installed.  Park development over the years mean that the city now uses it to host a variety of events including the Community Market, the Alternative Energy Fair & Electric Car Races, the Summer’s End Car Show and Children’s Day at Huntamer.  It has also become the site of Lacey’s annual Christmas tree where an animated Santa presides over the park during the holiday season.

Employees on their way home from work in Hawks Prairie can swing into Huntamer Park to feast on live entertainment.  The park welcomes picnickers so spread out a blanket, pack a meal, and enjoy the festivities.

This season’s activities are spread across Tuesdays, Wednesdays, and Saturdays from June 25—August 10.  Tuesday’s Children’s Entertainment Series begins at 6:30 pm, Wednesday features noon concerts, and Saturdays wrap up the week with musical concerts at 7:00 pm and movies following at dusk.  Food vendors will be on site during performances or attendees can bring their own snacks, blankets, and folding chairs for optimum enjoyment.

The Children’s Entertainment Series features 7 evenings of hands-on, interactive, and non-stop fun for all ages.  The Wednesday, mid-day events will showcase military bands, Beatles tributes, jazz, blues, pop, folk, and classical music.  Saturday nights, however, are music/movie tie-in’s which use an 18’x18’ screen to bring home the fun!  Superheroes, Elvis, and animated classics are all matched to rock, comedy, and classic tunes for an amazing evening of free entertainment.  July 27 will even feature a video game party co-sponsored by Elite Mobile Gaming.

Full details of the Lacey in Tune series, including dates, times, performance details, and contact information can be found here.

Don’t forget to BYOB…bring your own blanket!

July 3:  I Corps Sounds of Courage–Patriotic

More details on outdoor movies can be found here.