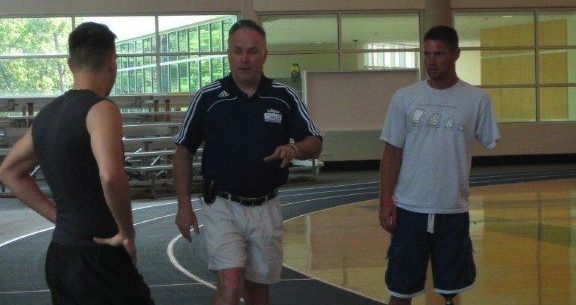 First and foremost, Bryan Hoddle spreads the message of hope.

Sure, he is one of the most accomplished track and field coaches in the entire country, if not the world.  His coaching accolades include head coach of the 2004 U.S. Paralympic Team at the Summer Olympics in Athens, recipient of the 1997 Pacific Northwest Track and Field Contributor of the year, and the personal coach of two Paralympic Gold Medalist – sprinters Tony Volpentest and Marlon Shirley.

Helping his athletes reach a winning time is obviously very important to the Olympia resident, but it may pale in comparison to his goal of helping people from all walks of life on a much more personal and rewarding level.

Hoddle has always had the ability to inspire others, further evidenced by his success both as a coach and renowned public speaker.  However, it was when he began working with injured soldiers at the Walter Reed Medical Center in Washington, DC, and the Lakeshore Foundation in Birmingham, Ala., that he realized his true purpose.

“I thought I would just go in and dazzle all the people, show them how to run and walk and what they could do in track and field, and the very first thing I saw was a soldier with extreme metal shrapnel wounds on his face,” said Hoddle about his first time visiting the Walter Reed Medical Center, which was around the time of his involvement coaching Team USA. “It took me back, and I had to go to the bathroom and compose myself.  I thought, ‘I’m not here to teach them how to run and walk, I’m here to teach them hope,’ and that’s the way I operate.  I’m blessed with the ability to give men and women hope and I know I have to use it.”

Hoddle, now a history teacher at Tenino Middle School has taught for over 30 years.

Over the course of his career, Hoddle has met with over 1,000 injured soldiers, whose wartime injuries and conditions include blindness, post-traumatic stress disorder and a loss of limbs.  Currently on the Board of Trustees for the Invictus Foundation, Hoddle was the recipient of the 2001-2002 Veterans of Foreign War Teacher of the Year Award for the State of Washington and the Veterans of Foreign War National Citizenship Education Teacher Award the same year.

Being involved with an organization like the Invictus Foundation and continuing to help soldiers requires hard work and dedication from Hoddle, both things he has given without hesitation.

“I didn’t even think about it,” said Hoddle of becoming involved with the Invictus Foundation. “I was ready immediately to hear what needed to be done.  That’s just how I view these opportunities to help those who helped our country, who gave everything to our country.  I’m blessed to have that opportunity.”

One of the individuals Hoddle has been able to work with is Steve Martin, a soldier who lost both of legs on duty in Afghanistan.

“Steve is really special to me, one of my favorite soldiers I’ve worked with easily,” said Hoddle.  “Seeing what he’s done, and seeing what he continues to do is special.  We plan on running the Seattle Rock & Roll Half Marathon together in June.  He’s just got a great heart.  He represents what is great about this country.”

Another lifelong friend of Hoddle’s is Volpentest, one of the most accomplished Paralympians in history.  Hoddle began working with Volpentest in the mid-1990s following the “original blade runners” appearance on a television special.  After finding out that Volpentest (who was born without hands or feet), already an Olympic champion in the 100 and 200 meter races in the 1992 Barcelona Olympics, lived in Edmonds, Tony reached out to the champion with some training techniques.  A bond formed through countless training sessions, and Hoddle would eventually cross paths with a presidential candidate.

“When I first talked to him on the phone, I told him ‘don’t hang up, that this is what I do,’ and that I could teach him a few things,” Hoddle said. “We immediately hit it off and remained in contact for several months.  At that point, he wasn’t really competing consistently, and the 1996 games were not in the plan.  I asked him about a comeback and finally he said yes and that he wanted me to coach him.”

Hoddle met with the runner’s agent and realized that Volpentest wanted to pay for the training.  Backing Volpentest training was Texas billionaire (and independent presidential candidate in the 1996 election) H.R. Perot.  After a background check by Perot, Hoddle was cleared to train Volpentest, who would eventually go on to set the record in both the 100 and 200 meters at the Paralympic games in Atlanta.

It was initially working with Volpentest that gave Hoddle the inspiration to work with soldiers.

“I found out that this was my calling and what I enjoy doing,” said Hoddle who uses the South Sound Champions Center in Tumwater as a training facility. “With a guy like Tony, that was the ultimate, just the ultimate competitor and athlete, and that mental edge, that ability to kick up his focus in front of crowds of 60,000-100,000 people, that’s what separates him.”

Where did Hoddle obtain the morals that help guide him to connect to others through hope?

“I would say my grandfather and my dad,” said Hoddle. “I looked up to them, just their approach to life and their relationships with others.”

While public speaking is a common fear, it’s certainly not for Hoddle.  He can remember from a young age his ability to perform in front of others.

“I remember one time my mom talking about me being at a restaurant, and the juke box came on and it was just time for me to perform and stand up on the chair,” Hoddle said. “I guess it just went from there.”

Having spoken to businesses, schools, collegiate athletic teams, and of course, wounded veterans all across the country, Hoddle has seen the bright spots and inspired hope to those in need of it.

“Everyone desires to be better. Whether I’m talking to world class athletes, at a business, a church function, or at South Sound Champions, everyone wants to be better,” Hoddle said.  “You’ve got to build that relationship and they have to know you care.  When I work with soldiers, I learn about their family, their background, and just how to connect with them.   When you go through personal loss or loss of a loved one, you need someone to connect with you, to form that caring relationship.”

“I always say, people don’t care about how much you know until they know how much you care,” Hoddle continued. “I’ve met every type of person, but then, you meet someone new who inspires you – someone like Tony, then Steve. I’m very anxious to see who I come across, who will inspire me and who will I inspire.”

For more information on Bryan Hoddle, including a complete biography, please visit his website.

For more information on the Invictus foundation, please click here.