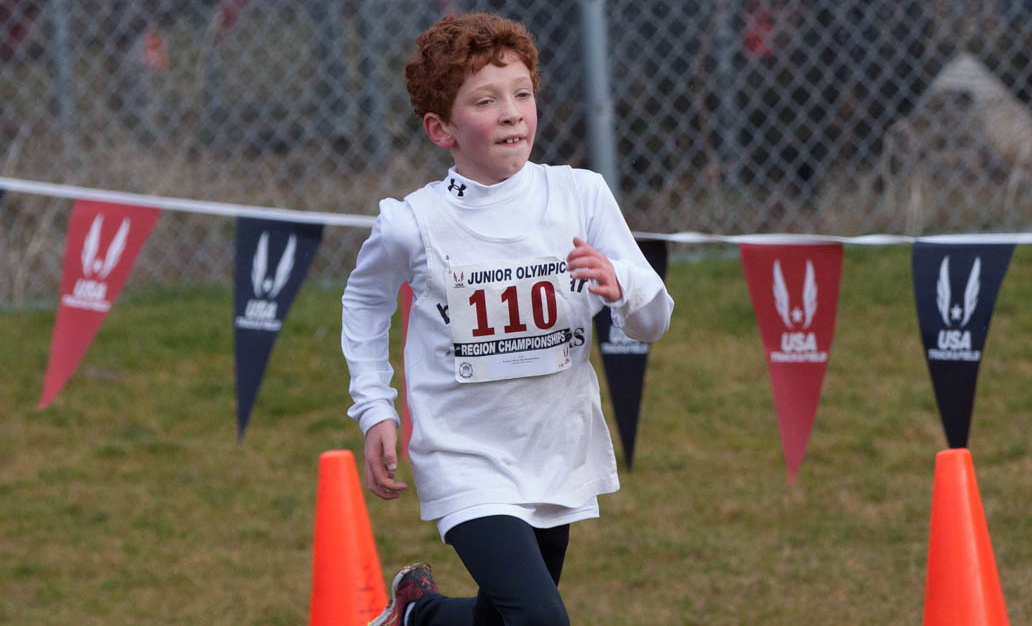 Humans seem to be born with the ability and the instinct to run.

Not only was Pioneer Elementary School student Oliver Kramer born with those traits, but he additionally has obtained the desire to run.

Thanks to training and mentorship from the Barron Park Striders of Olympia, Kramer has been able to harness his talent and compete at the highest level in the country for his age group.

At the USA Track and Field Junior Cross Country Nationals in Albuquerque, New Mexico on Saturday, Dec. 8, Kramer, who is eight years old and in third grade, finished 38th out of 140 in the Sub-Bantam division of the 2K race.

Kramer finished the race in 8:30, eleven seconds better than his previous best time.  Kramer was joined by Barron Park teammate Sam Randall, who took 132nd place with a time of 10:14.

Kramer enjoyed being at a national meet, and didn’t let the course’s high elevation affect him.

“I was just excited because here I was at this really important meet,” Kramer said in a phone interview with ThurstonTalk.com. “The high elevation was tough, but I was so excited that I didn’t notice it.”

Kramer’s infatuation with distance running began when his mother Sasha began training for a half marathon.  This coupled with the events at the 2012 summer Olympics pushed Kramer to official participation in the sport.

The Kramer’s were referred by a family friend to the Striders, and so far, those closest to Oliver enjoy what they’ve seen.

“It was really exciting to have him be successful (at the national event). He really enjoys it and it’s opened some doors to some exciting opportunities,” said Chad Kramer, Oliver’s father. “What’s nice to see is that the older kids in the Barron Park Striders are positive to the younger kids and really nice to him which encourages him.”

Coached by Drew Stevick, who founded the Striders 25 years ago in Palo Alto, Calif., Kramer is able to receive the proper guidance and teachings on technique that have allowed him to garner success at such a young age.

“I like being around the coaches, they’re all very nice,” Kramer said. “They’ve really helped me improve my stride.”

Along with distance running events, the Striders provide coaching for individual events such as sprints, long/high jumps, throwing (shot-put, javelin, discus), and relay events.  Team members range across all age groups and skill levels, as no prior experience in track and field is necessary to join the Striders.

Stevick’s son, Jesse, serves as the head cross country coach for the Olympia High School boys team.  He says Kramer has the right mindset to be successful at such a young age.  However, Stevick makes an effort to make sure all the athletes in the Barron Park Striders do not over-train and over-exert themselves in the sport.

“Oliver is a focused little guy, very talented and great to coach,” Stevick said. “One of the important things is to not overwork kids and keep them having fun. Get kids to like it and keep liking it is the key and that’s how we coach every athlete.”

“There are always talented kids out there and it’s a sport that really appeals to some kids who like the objectivity of it and like to know they’re improving,” Stevick said.  “(The results) are always obvious and you certainly tend to get kids who understand objective improvement and can be motivated by that.”

One of those individuals driven by objective improvement is Oliver, who also enjoys the fact that traveling to meets allows him to meet new people and make new friends.

“I enjoy beating my old times, that’s really cool,” Kramer said. “I enjoy going to other places in the state and meeting people and making friends.”

Kramer says he plans on participating in javelin during the spring and that he hopes to qualify for the Junior Olympics one day in the event.  With his life in front of him, Kramer says he plans to keep improving his distance running skills and focus on what’s important.

“I’m trying to work on not looking back during the race,” Kramer said. “I want to focus on what is in front of me.”

Click here for more information on the Barron Park Striders.