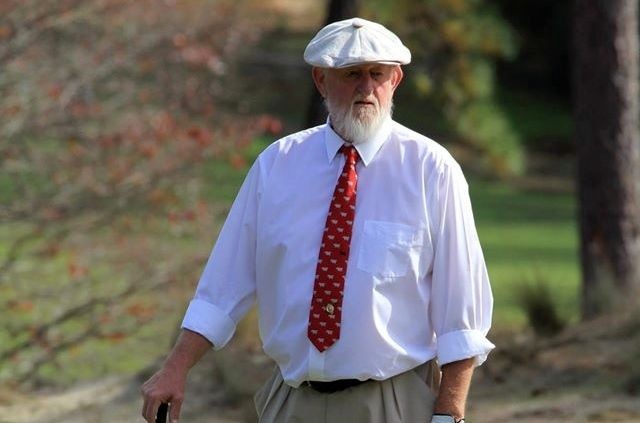 You know how there are just some things in life that you never expect to get excited about? Maybe for you it’s ice dancing. Or barbecuing. Or kittens.

For me, it’s been golf. My experiences with golf have been mainly of the mini-golf variety, which was a fun way to pass the time when I was, say, 17. But real golf? I just couldn’t get excited about it. I even lived near Augusta, Georgia for a while, and the fervor of the Master’s Golf Tournament couldn’t sway me.

The passion of the golfers at Capital High School, where I teach English, has touched me. My first article for ThurstonTalk.com was about golf, with another following soon after. And let’s not forget that my husband’s favorite uncle, Rob Ahlschwede, is famous in the world of hickory golf.

For those not in the know (ahem), let me assist you, as I recently sat down in Ahlschwede’s “golf room” to get a history lesson. If you are having trouble conjuring up an image, his golf room is floor-to-ceiling golf: art work, hundreds of antique clubs, balls of every variety, a big desk at which to work, trophies of all sorts, and ancient tees. If it’s golf-related, he’s got it.

Hickory golf is basically what was played before the late 1920s, when steel shafted clubs became all the rage. Pre-steel, the shafts were made of hickory wood, which has a very straight grain. Golf played with steel clubs is known as “modern” golf.

Golf wasn’t a sport a farm boy growing up in mid-twentieth century eastern Nebraska was likely to pick up. However, it was while recovering from an appendectomy in fifth grade that Ahlschwede discovered the television show “Shell’s Wonderful World of Golf.” He remembers thinking, “That looks like an enjoyable game. I wonder what that’s about?” He started pestering his father to get him some golf clubs.

Ahlschwede’s dad made him a one-piece golf club from a branch. His father then happened upon a set of hickory clubs going for a song at a farm sale. Rob, the youngest Ahlschwede brother, thought they were pretty neat. “I beat them all around the farm until I broke all but two, and I have both of them still,” he recalls.

Ahlschwede went on to play football for the University of Nebraska, marry his delightful wife Susan, move to Seattle for graduate school at the University of Washington, and then move to Munich to teach. It was after their return to Nebraska from Munich that friends got him onto the golf course. He began perfecting his game in the 1980s.

Worlds collided when Ahlschwede realized there were treasures to be found in the realm of vintage golf ephemera. His love of the game, coupled with his love of collecting and of carpentry, got him interested in golf’s hickory roots. “I met some people who were members of the Golf Collectors’ Society, and I joined. Once or twice a year they would get together and play with hickory clubs. A few of us collectors started to get really serious about playing.”

The Society of Hickory Golfers was then created to set up guidelines for hickory play, and they decided upon the year 1935 as a cut-off for the hickory-era. “Anything manufactured or designed before then was approved for hickory play,” explains Ahlschwede. He is currently the chair of the Equipment Committee, which has procedures in place to approve replicas for play.

Ahlschwede returned to Washington when he and his wife moved to Olympia in 2007. He went on to co-found the Northwest Hickory Players (NWHP), a group dedicated to playing with legit, pre-1935 hickory clubs and dressing the part. NWHP plays pre-1935 era courses (those originally designed for hickory golf) such as Seattle’s Jefferson Park, which recently celebrated its centennial.

Ahlschwede travels the country (and sometimes further afield, playing courses in places such as Scotland) playing hickory golf. His favorite course is Mid Pines in North Carolina. Recently, Ahlschwede played in the annual Canada versus USA match, held this year in Austin, Texas. It was here at the Onion Creek Hickory Classic that the US won 17-13, retaining the Swift Trophy, and he humbly accepted the award for Team USA’s Most Valuable Player.

His trophy is a bit of sculpture. It features the bridge on the 18th hole at St. Andrews course, and the figure depicted is Tom Morris, the first professional at St. Andrews. Morris also designed many golf courses and clubs.

Being surrounded by others who share his passion for hickory golf is what Ahlschwede truly loves. He is known as “the hat guy” to many in the hickory circuit, as he sells classic golf hats at matches. Ahlschwede has a hickory club repair business that keeps him very busy. He and Jack Wilson have amassed quite a collection of hickory clubs, 70 sets of which are available for rent.

Next up for Ahlschwede is the National Hickory Championship in West Virginia in June. This year all the clubs played at the championship must be pre-1900.

Even though golf has never been my passion, I now find Uncle Rob’s golf room a fascinating treasure trove. Walking through its door is kind of like walking into Narnia. And, while I still have zero desire to pick up a golf club and play a few rounds, I will consider driving the golf cart. Baby steps, people.

Connect with the NWHP on their Facebook page. And if you’ve got some old hickories that have seen better days, you can contact Rob Ahlschwede at swedeberger@gmail.com.