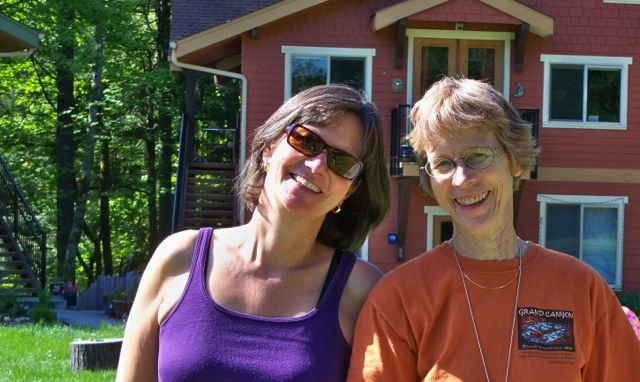 The first thing I notice is the father and son playing basketball.  The boy is little and the ball doesn’t quite reach the hoop.  Behind them is a garden.  Someone is picking the last of the cucumbers and zucchinis.  The path I’m on opens into a horseshoe which is flanked by houses.  There’s a field in the middle with a covered seating area.  Towering deciduous trees hover in the background.  I climb the steps to Liv Monroe’s home and knock.

Monroe is one of the driving forces behind the Woodard Lane Cohousing development in West Olympia.  “We’re an intentional community of people who want to keep the privacy and ownership of their own homes but still want to have community and still get together,” says Monroe. 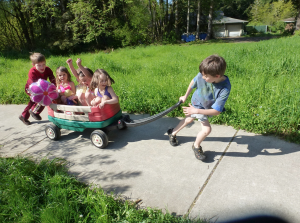 Cohousing has been around in various forms for years.  The current model began in Denmark during the 1960s.  Monroe got the idea after visiting a cohousing community in Seattle.  At the time she was living in a big house by herself.  “I wanted to way downsize,” says Monroe.  She also wanted a place in the middle of town that felt like a cabin in the woods.  Wherever she went had to have a view of Mount Rainier.

Monroe asks if I’d like cup of tea.  We sit at her table and look out the window.  She points to the spot where I could see Rainier.  The interior is cozy.  There’s a deck out the back door that overlooks a ravine.  Monroe’s home is small by today’s standards and that’s the point.  “You don’t have to have all the things people think they need because we have a common house.”  The common house is a communal space complete with kitchen, living room, bathroom, bedroom and laundry facility.

In fact, Monroe thinks her home is too big – so she got a housemate.  Oriana Noel Lewis has lived with Monroe since 2010.  “I’ve come to believe that this is how we were meant to live,” says Noel Lewis.  “There’s something really natural and organic about living with people you know and care about.” 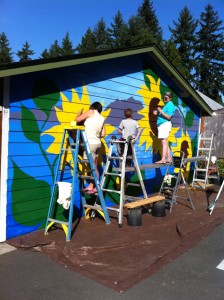 Building relationships is at the core of Woodard Lane’s approach.  Weekly dinners are held at the common house with different people cooking each time.  Each resident is part of a committee who is responsible for everything from landscaping to finances.

A good example of this philosophy in action is the heating.  Each unit is really a fourplex with a shared furnace.  “Heating bills are paid by the community,” says Monroe.  “We have to trust other people like a family.”  There is flexibility.  Parents with a newborn use more heat and that’s okay because it’s what they need.

Those of us who are squeamish about conflict would be a poor fit for cohousing says Monroe.  It seems a critical component of success is conflict resolution.  “We have a heart circle four times a year,” says Monroe.  “Here we’ll learn things like my grandmother died or I’m really afraid of your dog and that’s why I don’t come out when your dog is out.  People get comfortable enough so they can say things that are true for them.”

Of course living in close proximity to one another isn’t without challenges.  “Someone had moved my clothes out of the washer and didn’t put them in the dryer.  If I lived alone this is something I wouldn’t have to deal with.  I sent an email out in the most kind, most clear way to say ‘hey, not okay,'” says Noel Lewis.  Turns out the culprit knew certain things didn’t go in the dryer and chose to air on the side of caution.