Home Education Olympia Student Brennan Shacklett Opens the ‘Gates’ to the Next Generation in... 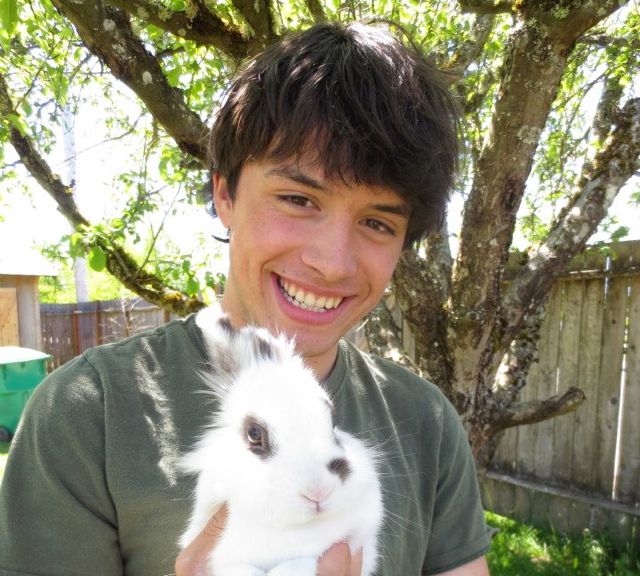 Careers in the technology arena are quickly becoming some of the highest-paying, most respected jobs in the workforce. The U.S. News Rankings of “The 100 Best Jobs in 2014” recently filled their top positions with Software Developer (1), Computer Systems Analyst (2), and Web Developer (9). Olympia High School senior Brennan Shacklett is at the forefront. Already, he has been accepted to the prestigious Stanford University, California’s Ivy League, and intends to pursue a degree in computer science.

Starting small, Shacklett’s interest in computer science was first sparked in 6th grade when his grandfather gave him his first computer. It was a Mac. Initially, Shacklett enjoyed playing with the pre-installed “shiny” programs. But after awhile, the “newness” wore off. “I didn’t have the money to go out and buy new software for entertainment,” said Shacklett. Instead, he turned towards Linux, a computer operating system designed to be free, open source software for collaborative development and distribution. The beauty of open source software is that it can be modified by users. Basically, it’s free for anyone who has the skill to use it. “I wanted to change programs, customize them to my liking. Linux will let you do that,” he explained.

Motivated to uncover the Linux world, Shacklett learned through experimentation, buying books to help him through the process. Shacklett’s learning was propelled throughout his middle school years. He attended NOVA, an independent middle school dedicated to offering a challenging and engaging curriculum. It was there that his understanding of Linux would progress. “NOVA utilized the Linux software system, but it was slow and full of kinks because the computers were rather ancient,” said Brennan. “One of my teachers in 7th and 8th grade gave me a lot of time to work with the Linux computers he had. Having somebody who was actually willing to spend money on hardware that I could use and learn on was an enormous opportunity for me to advance.”

Upon reaching high school, Shacklett had many interests. His schedule was quickly filled with core classes, orchestra, and Spanish. There didn’t seem to be any room for computer science. But propelled by his passion to learn about coding, Shacklett inquired with the computer science teacher, Marc Turnbow.

“He walked into my classroom one morning and said he could smell computers, said he could smell the Linux and he wanted to know how he could help,” explained Turnbow. With the ‘Go ahead’ from Turnbow, Shacklett arrived at 7:00 am each morning to work on the computers. It essentially became an unofficial independent study that was completely self-motivated. “At first the learning curve was huge and my main focus was just to get a strong grasp on programming,” said Shacklett.

Coming into sophomore year, Shacklett and Turnbow created an official independent study contract so that Shacklett could get credit for his time. This zero hour credit has continued on into his senior year. “Now, I actually write programs and help maintain the school’s Linux computers,” he said.

With four years of experience, Shacklett now has more knowledge about the Linux systems than almost anyone else at OHS. He’s the go-to guy when something goes wrong. All of this knowledge has been put to use at his job working for Generation YES (Youth and Educators Succeeding), a company that writes software for project-based learning in schools. Centered on the idea that technology tends to be a burden for teachers, GenYES aims to provide ways for students to help teachers solve technological problems. Students can also do technology projects which can be assessed by national standards, thereby empowering students and aiding teachers simultaneously.

Shacklett’s connection to Turnbow ultimately landed him the job. At the beginning of his sophomore year, an opening came up at GenYES. Turnbow, who works both as a teacher and at GenYES as a network specialist, recommended Shacklett for the job, knowing that he had all the necessary skills. With Turnbow’s recommendation, Shacklett got the job. “It was basically, ‘You’re going to start getting paid and if you can pull it off, then we’re good!’” recalls Shacklett. “It was a trial-run and my boss made it very clear I was getting paid to learn,” he said.

According to Shacklett, his job was not all smooth sailing. “It was really hard at the beginning. Not only was there a huge learning curve for me, but also my predecessor wasn’t there to explain what he had been doing or how to work the website.” True to his determined and curious nature, Shacklett pushed forward, figuring it out on his own. Early on, his boss came to recognize Shacklett’s skill, resulting in continual raises over the years as a motivator for Shacklett to work more. His schedule has varied, but he currently works at the GenYES office location on Wednesday and Friday for 3 hours. The rest he does remotely, either at his house or in Turnbow’s classroom. “They’re long days,” Shacklett commented, “I don’t get to spend as much time socializing as some people, but I think it’s worth it.”

However, with senior year coming to a close, Shacklett is beginning to move on. “I love working for such a great and innovative company but at this point I’m not sure how much learning is going on. I feel like I’ve plateaued,” he said. Alas, there are still new skills he is learning. “Since I’m moving on next year, I am now in charge of two new sophomores so I’m learning a lot about management and training others,” he explains. Not everything comes easy though. “I’m not the most patient person so it can be a challenge to train the new programmers. But I love seeing them progress!” he said with a smile.

Aside from his job, Shacklett has maintained a 4.0 GPA with honors and AP (advanced placement) courses. On top of that, he contributes to open-source coding projects and maintains the school servers. “My contribution to the Linux Kernel have really given me credibility and the chance to work with other developers,” said Shacklett.

During his junior year, Shacklett and his friend and fellow programmer, David Garber, formed a programming club to teach interested students how to program. Going into senior year, they transitioned the club to focus more on competitions. So far they have competed at the University of Washington, placing in the advanced division, and at Pacific Lutheran University, placing in both the entry and advanced divisions. The competitions are among high school students. Each team is given a set of problems and a specific time frame (for example, three hours) to complete the problem set.

Outside of computers, Shacklett has continued playing his violin in the school symphony. He also has maintained his health over the years, bicycling when he can. “I don’t get to exercise as much as I would like, but as long as I’m not turning into some computer blob, I think I’m doing okay,” he said jokingly. In the summers, he makes up for it, taking an annual six-week sailing trip with his dad.

All of these focused extracurricular activities have given Shacklett a great playing hand for college. “If you look at what I’ve done, it’s very focused. You can really see the drive and I think that’s impressive to colleges,” stated Shacklett. Recognizing his love for programming, Shacklett’s main goal was to find a school with a stellar computer science program. Shacklett applied to Massachusets Institute of Technology (MIT), Stanford, UC-Berkeley, and University of Washington. Soon, Shacklett received an acceptance from Stanford. “I was so excited: Stanford has great financial aid, it’s on the west coast in a beautiful location, and it excels at computer science,” explained Shacklett.

Once accepted to Stanford, UW and UC-Berkeley were out of the race. However, he is still considering MIT. “The great thing about MIT is that its thing is computer science, that’s the focus. There, I’m going to find a community of like-minded people. Plus, the surrounding city, Boston, Massachusetts, is potentially more interesting,” he said. Either way, he’s got two great schools lined up.

Both of which will allow him to follow his dream: “I want to get a degree in computer science and get involved in some kind of start-up. It’d always be cool to be the next Twitter or Facebook but I’m hoping to be involved in something more useful,” he said. To him, the most meaningful project would incorporate technology and the environment.

At his young age, Shacklett is loaded with experience, skill, and ambition. Turnbow commented that he saw his great potential from the beginning, even going as far to say, “I would love to get him into my family somehow.”

“I’ve had dealings with Brennan on lots of different fronts. I know him as a student, as a friend, and as a fellow worker at GenYES. I saw him come into high school as a volunteer and now as somebody who’s the master of a huge website,” Turnbow continued. “I’m really going to miss him. And yes, he would be a great addition to anybody’s gene pool. I’ve done everything I could to marry my daughters off to him -he’s just a little too young.”

On a last whim, Turnbow summed up Shacklett in a few words, “Brennan never boasts. You really have to dig to find out what he’s up to. But he is one of the brightest, certainly one of the sweetest, human beings I’ve ever met in my life.”