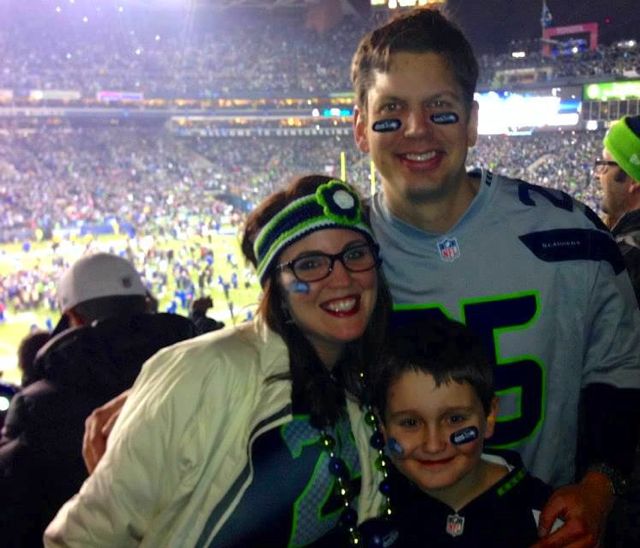 A NFL conference championship game will always be surrounded by hype, anticipation, and uneasiness amongst the fan bases of opposing teams.

When factoring the history between the two teams combined with the talent on both rosters, the 2014 NFC title game meant more than “just” earning a trip to play on the sport’s biggest stage.

By some measures, this past Sunday’s contest could be considered the biggest sporting event in the state.

A collection of Thurston County citizens were in attendance at CenturyLink Field, giving themselves an unforgettable sporting experience to remember for a lifetime.

While the energy from the field spread to living rooms across Seahawk nation, nothing beat the opportunity to watch the game live.

The following quotes are from individuals in attendance at CenturyLink Field and focus on what stood out most from Conference Championship Sunday.

“For a regular season game, I arrive at my seats between 30 – 45 minutes before kick off,” said Olympia resident and longtime season ticket holder Dave Nicandri.  “For playoff games, I like being in my seat one to two hours prior.  There is such a sense of expectation in the stadium that almost has no correlation to a regular season game.  I put on my binoculars to look at Jim Harbaugh and Pete Carroll on the field or the antics of fans in the stands.  You can just feel the difference in the atmosphere, and there is nothing quite like it.”

“The pre-game buzz was overwhelming,” said Rob Perlot, an orthodontist with an office in West Olympia. “There was a good sense of unity and pride in the Seahawks and also for the city of Seattle and the state of Washington.  Once inside the CLink, the din of in unison cheering ‘SEA…….HAWKS’ was enveloping, the electricity for the game and frenzy palpable.”

“The atmosphere was electric and the fans didn’t let up the entire game,” said Olympia native Conor McDonald, who now lives in Seattle. “It was as loud as it has ever been.”

“The event was made even more special with Paul Allen raising the 12th man flag at the start and Macklemore playing at halftime,” said Scott Rowley, an Olympia pediatric dentist at Small to Tall Pediatric Dentistry.

“What would seem to be a long time before the game starts goes by very quickly and then you have this crescendo when the game actually starts,” said Nicandri, the former Director of the Washington State History Society. “Once the game starts, because so much is at stake, every play is magnified and it feels like the game is six hours. It’s like what people talk about in accidents, the time slows down.”

“The stadium erupted when Lynch scored on his touchdown run and you could feel the floor shake, rattle and roll,” said Perlot.

“I would say the stadium was the loudest I have ever heard at any sports venue, including previous Seahawk games that I’ve attended,” Rowley added.  “My ears were ringing, even after I got home hours later.”

“This team has been so fun to watch and the entire city has really rallied around them,” said McDonald. “There is a buzz about the Hawks everywhere you go.”

The interception by Smith from Sherman’s deflection stood out to the fans more than any moment in the game.  (Hear Steve Raible call the interception here.)

“It’s the time slowing down theory….When Kaepernick drops back, it’s almost like you could hear 60,000 people draw in a breath. There was that instantaneous recognition that this is it and for all the marbles,” said Nicandri, who attends games with his son Dominic. “(After Sherman’s deflection) you could see the ball falling, micro-second by micro-second. And then……”

“It was a mad-house of hugs, high fives and cat calls of ‘You Mad Bro?’” said Perlot. “The win was not only for the Seahawks, but also for the 12th Man.

“It was a very emotional moment. I even noticed several people crying at the conclusion of the game, so overcome with joy,” Rowley added. “The Seahawk chants from the crowd continued outside the stadium and the entire walk back to the car.”

“It was sort of surreal just to be there for that moment, to be part of Seattle sports history,” said McDonald.  “It’s something I’ll remember for the rest of my life.”

For some fans, their journey with the Seahawks will continue to the Super Bowl.

“I am excited to bring the energy of the 12th man to New Jersey,” said Steamboat Island resident, Travis Hackney, a dentist in Shelton. “Having been a fan since I was a little kid, during the days of Steve Largent, Curt Warner, and Dave Krieg it is so refreshing to have another star my kids can look up to in Russell Wilson.  Going to the Super Bowl with the Seahawks is a dream come true.  GO HAWKS!”

Hackney’s final words say it all.  Hawk Nation is in full force in Olympia.