November and December are hectic months; holiday shopping, gatherings with friends and family, errand running, and the hustle and bustle of the season.  We are fortunate enough to live in an area that has wonderful gardens to help us escape the seasonal insanity – two of my favorite garden escapes are the Yashiro Japanese Garden and the Percival Landing garden near the Olympia Farmers Market  These gardens have completely different styles but are equally beautiful.

The Yashiro Japanese Garden is Olympia’s hidden treasure.   The Yashiro Garden, located at 1010 Plum Street, is tucked behind a fence, which creates an enclosed sanctuary that sets it apart from the larger world.   Yashiro, designed by noted landscape architect Bob Murase, was dedicated in May of 1990 and was a joint project between the City of Olympia and its sister city of Yashiro, Japan.  The Japanese garden may initially look “simple,” but there are centuries of tradition and thought behind the design.

Yashiro’s clean lines reduce nature to its essence.  Each plant is arranged so that it can be appreciated for its own shape and form.  Evergreen plants are restrained and unobtrusive, their shape and texture used to create a soothing atmosphere.  The minimal use of bright color in leaves,  fruits, and flowers allows the different shades and textures of green to be enjoyed without distraction.  The garden’s beauty comes from the cumulative effect of the simple and naturalistic material used in the design and construction.  Intimacy, tranquility, harmony, peace, and quiet contemplation are the goals of the Yashiro Garden, and these goals are met by emphasizing space and austere simplicity.  Mossy lanterns, worn rocks, and water features placed throughout the garden remind us that we are part of the natural order.  Colorful ornamentation isn’t used so that the visitor can concentrate on the garden itself.

Percival Landing’s riot of plants and color presents a beautiful contrast to the quiet, green simplicity of the Yashiro Japanese Garden.  The large variety of plant material, crowded beds, and different flower and leaf colors create a beautiful space to be savored and enjoyed around Anthony’s Restaurant.  Each plant at the Landing is to be viewed and enjoyed as part of the whole; each plant at the Yashiro Garden is be viewed and enjoyed for its own placement and form.  The Landing’s plants’ large and small leaves, their various leaf shapes and leaf colors are made more interesting and obvious when contrasted with the surrounding plants.  Each plant “plays” off the plants around it.  A small leaf that is yellow in color really shows off when placed next to a glossy, dark green leaf. 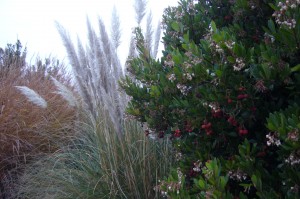 The Landing’s shrubs and herbaceous perennials are planted so that there is a succession of flowers and fruit throughout the Spring, Summer, and Fall.  Daylilies, Brown Eyed Susans, rockroses, Coneflower, and many other plants provide beautiful flower color.  These flowering plants also attract butterflies, birds, and bees, which provide their own sound, beauty, and attraction. As a general rule, there isn’t much insect or wildlife activity in a Japanese garden because there isn’t much flowers or fruit production to attract insect pollinators and birds.  The fine, thread like leaves of ornamental grasses move and rustle as waterfront breezes move through them.  The plants at the Yashiro Japanese Garden, in contrast, are very still and quiet.

At the Yashiro Japanese Garden, the landscape doesn’t change much throughout the year because of the evergreen, non-flowering nature of the plants.  With the Landing, you can visit the landscape on a daily basis and see something new almost every time.  In March, the red flowering currant is blooming and the hummingbirds are busy gathering the nectar; in April the pieris is blooming with its white bell shaped flowers; in July the rockroses are blooming and the showy flowers are enjoyed by people and honeybees alike; in September the ornamental grasses’ flower panicles are blooming and merrily moving in the wind; and in December the structural elements of the deciduous shrubs really stand out.   The landscape encourages visitors to walk around and explore the planting beds because each one has a slightly different mix of plants, flowers, and berries.