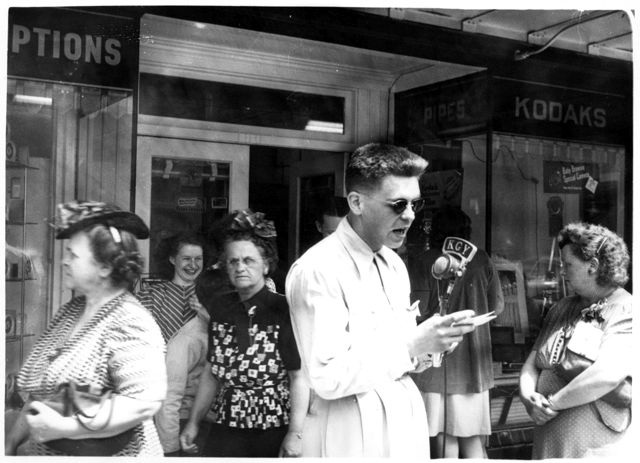 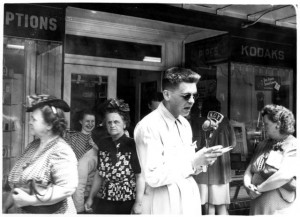 Imagine it is the middle of winter. The wind is blowing and there was record snowfall the night before. The power is out, the telephone lines are down and Internet access is impossible. When bad weather shuts everything down, local families tune their radios in to KGY AM to stay connected, and have for generations.

“When the big windstorms happen, families huddle around the radio and listen to KGY for school closures and bus route changes. We have the ability to deliver information quickly,” said Nick Kerry, a fourth generation member of the Kerry family, who has owned KGY since 1939.

The challenge KGY now faces is to encourage Thurston County residents to turn to it on a daily basis, rather than just in the event of an emergency. Through changing technology and a return to a locally based format, the station plans to do just that. History shows that KGY has remained at the forefront of change as technology revolutionizes the industry and as the needs of the community changes.

KGY has a long history in Olympia, going back to Saint Martin’s College (now Saint Martin’s University). It was there that Benedictine monk Father Sebastian Ruth began experimenting with radio, and when the FCC first started licensing radio stations, KGY was one of the first stations in Washington State to be licensed. “In fact, the three letter call stations are a heritage, the oldest around,” Kerry said.

In 1939 Nick Kerry’s great-grandfather Tom Olsen, an Olympia native, purchased the business. In 1960 KGY moved to its current location on Marine Drive overlooking Budd Inlet and neighbor to Swantown Marina and Hearthfire Grill. It was built on pilings and has dramatic views of Budd Inlet and the Olympic Mountains. “This was the perfect location for an AM tower. The radials went into the saltwater which they believed created a stronger signal,” said Kerry. 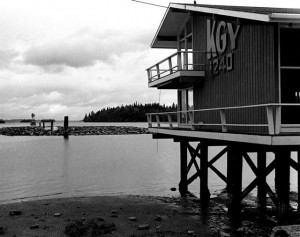 Barbara Olsen Kerry ran the stations until the mid-2000s and today the family continues to remain owners, the majority of whom live in Olympia.

In the early days of radio, the 30’s, 40’s, and 50’s, singers, musicians, or actors gathered in a studio with a microphone broadcasting news, singing songs, conducting a band, or acting out a play. Until the 1960’s, radio stations would sign off every evening, with the Star Spangled Banner signaling the end of the day. The 1960’s introduced spinning records, disc jockeys, reel to reel tape, and other new technology that allowed radio stations to capture audio and replay it more readily. “National news was at the top of every hour, and then updates throughout the day. Radio was a resource for the majority of the community,” said Kerry.

Today, AM radio is facing the challenge of a decreasing and aging audience base. Part of the decrease in audience was the result of disruptions to the AM signal, but this has changed as the technology has improved. “We stream now, so you can listen anywhere. The digital format overcomes the limitations of any transmitter. Streaming is very important. It doesn’t differentiate between AM and FM,” said Jackson Weaver, General Manager of KGY Radio.

“Older demographics are the ones listening. We need a programming stream that will continue to appeal to them, yet develop the framework to increase the audience base going forward,” said Weaver.

“We want to get back to our roots and back to the value of what KGY does, which is local,” said Kevin Huffer, Program Operations Director at KGY and former BBC journalist. 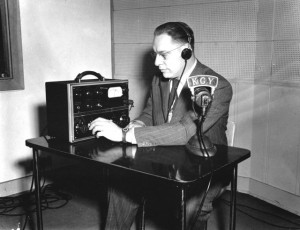 “Our first priority is to shape a KGY that is viable in the AM format. People are listening in on different devices, smart phones, iPods, streaming on their laptop. Our goal is to continue with the local focus, particularly in the morning and provide local content throughout the day.  While some of the content may happen somewhere else, Dennis Miller’s show, for example, if something happens locally, we can interrupt programming in time to get people the information that they need,” said Huffer.

“The ability to bring the local scene to our listeners, to broadcast as a resource to the community – this doesn’t change,” said Kerry.

Over the past few months, the station has solicited feedback from the community in order to develop content that will appeal to Thurston County. KGY is listening. “Local people want to sound off, they want a forum in which to be heard by leaders in the community. It is our job to do this.  Decision Makers is one example of this, where Ken Balsley interviews local decision makers. People in the South Sound want the opportunity to get on the radio and express their opinion. This happens all the time in Seattle, and we have the ability to bring that opportunity to this community,” said Kerry.

Individuals have also expressed interest in continuing with local high school sports coverage, which KGY will do on their Game of the Week Show with Brent Bryant and Keith Clark. On Sundays, they will air Imagination Theatre, produced in Seattle, When Radio Was, featuring old-time radio dramas and Remember When.

KGY will provide a mix of the old and the new, local as well as regional coverage, but most important, it desires to be the radio station for Thurston County, for county issues, news and information.

Tune in to KGY at AM1240 or kgyradio.com.  For more historical photos from KGY, click here.

The 2021 Master Recycler Composter Volunteer Training application is now available! Do you have a passion for waste reduction, composting, and recycling? If yes, then consider applying to be a volunteer with the Master Recycler[...]
8:00 am Little Backyard Adventure @ LBA park
Little Backyard Adventure @ LBA park
Jul 31 @ 8:00 am