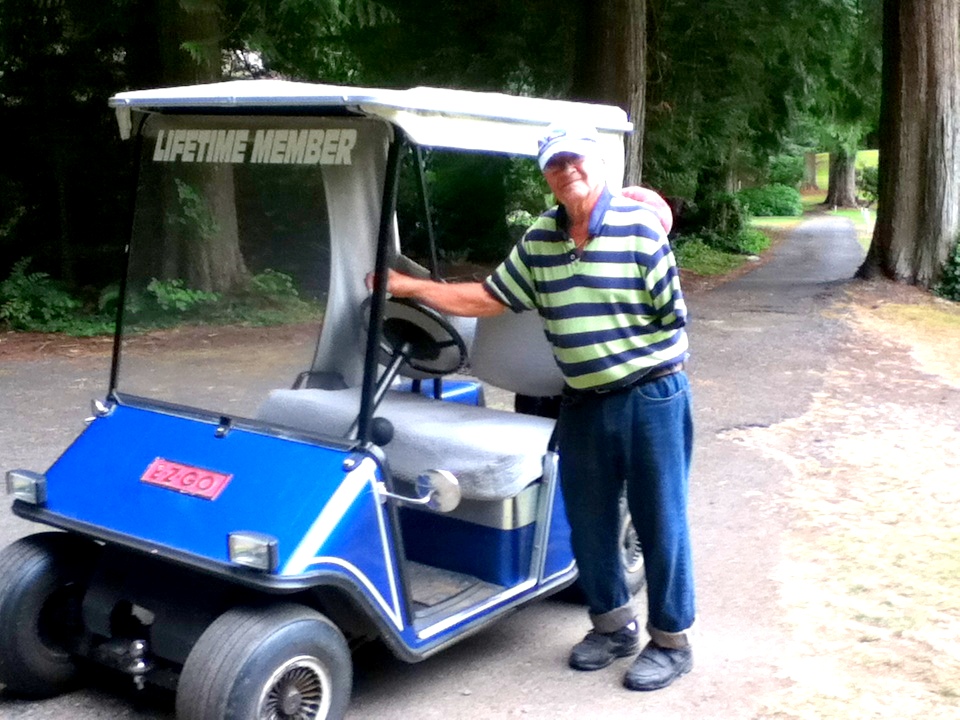 Keith Kincy’s advice for golfers is, “Play for fun.” At 82, Keith can still out-golf many of his peers. He has a swift and accurate swing.

Keith started golfing 50 years ago when he was 33. “I told a friend and employee, Mel Filter, I would like to play golf. He took me to Capitol City Golf Course,” Keith shares. That sparked his passion for the game.

Golf is in Keith’s genes. His uncle, Bud Ward, won the National Amateur Championship in 1939 and 1941. And, Keith has passed his dedication to the game on to younger members of the Kincy family. His son, Dean, is a scratch golfer. His other son, David, works as a groundskeeper at Salish Cliffs Golf Course at Little Creek Casino near Shelton. His daughter also lives nearby, however she does not golf.

The Kincy family also has a long history in Olympia. Keith’s grandfather, Oscar Kincy, started Kincy Hardware in downtown Olympia in 1917. Keith started work at the hardware store, which closed in 1982, and later owned two well-drilling businesses: Kincy Hardware and Well Drilling, from 1957-1982 and Keith Kincy Well Drilling, from 1991-1997. “We had four drilling machines and drilled I don’t know how many wells, including the Olympia Brewery, City of Tumwater and one for the City of Olympia,” Keith explains.

As a retirement gift, Delphi Golf Course awarded him a lifetime membership. His employment days may be behind him now, but Keith continues to work on his golf game almost every day. On days when he does not make it to the course, “I golf up here,” Keith says, pointing to his forehead.

Throughout his long history of work, Keith has managed to squeeze in a lot of golf. “In my younger years, I golfed 18 holes in the morning and another 18 after work. Before I got hurt in 1994, I had a 3-handicap. Pretty good,” he smiles.

In 1994, Keith lost his arm in a drilling accident. However, he has continued to golf, and golf well. He keeps track of his recent scores in a small notebook. “These are all in the last three months,” he says, pointing to three columns of scores in the 70’s and a couple in the low 80’s. Keith took second place this July in the Washington Senior Games Golf Tournament. “I was tied for first and missed the last putt,” he laments, shaking his head. Impressive for any golfer, let alone one swinging with just one arm.

A hole-in-one is a rare feat, but Keith has hit four of them in his lifetime, one at the Olympia Country Club and three at the Delphi Golf Course, the most recent in August of 2012. “This is a tough little course,” he says. “There’s not one easy hole here.” Delphi is a nine-hole executive course, so he goes around twice to get in his daily 18 holes. He still plays in the Monday Night Couples League at Delphi and runs the Friday Night Scramble.

One highlight from all his years on fairways is meeting Arnold Palmer in 1973 at Tumwater Valley. “I met him and shook his hand. I walked up the 18th hole with him. He birdied the hole,” Keith reminisces. No other golf luminaries have crossed his path, but Keith smiles at a fond memory at a near brush with greatness. “I took money from Fred Couples’ brother once. At Tumwater Valley, we had a cheat sheet and running through the names I saw ‘Couples.’ When he came in I asked, ‘Are you related?’ He said, ‘Brother.’” Keith chuckles and shrugs at the memory.

“We’ll tease him sometimes,” says Don Smith, a fellow member of the Mid-Washington Senior Golf Association whose members play different courses throughout southwest Washington on Wednesdays during the season. “When he makes a good shot or something, we’ll tell him, ‘Now that’s not fair, Keith. We have to swing with two arms,’” Don laughs. “But really, he’s a good player.”

And a good sport. Keith has a ready laugh and anyone can see what he looks forward to the most is that next swing.