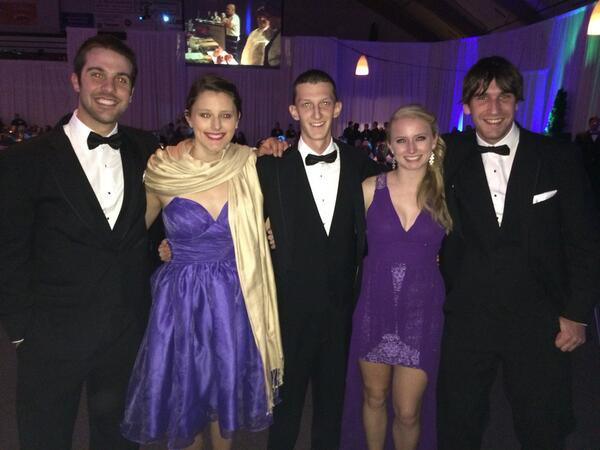 Social media is everywhere. We access it on our phone, tablet, laptop e-reader.  We use it to look up business information, update loved ones about our lives, see cats dressed up in costumes. Whatever we might use it for, we use it.  That’s a fact, and one that has not gone unnoticed by the tech savvy leaders at Saint Martin’s University.

Carl Lew, web manager and social media facilitator for Saint Martin’s University, is aware of the growing impact of social media on decision making and community building. Three years ago, with this in mind, Lew formed The Social Squad: a group of Saint Martin’s students charged with helping  to keep the University’s Twitter, Facebook, Instagram and other social media sites up to date.

The group began as a way to showcase campus life from a student perspective.  “We wanted to show what it was like to be a student here on campus – what was student life like,” shares Lew.  “We wanted an authentic student voice.”

As social media has evolved, so has the group.  Originally conceived as simply an avenue to engage students more fully, the Social Squad has grown into a valued part of the University’s overall community building strategy.

Stephen Mahnken, a junior and business marketing major, has been connected with the Social Squad since his first day at Saint Martin’s.  He focuses on campus and residential life for the Social Squad along with Brooke Sanchez, also a junior, who is majoring in English with an education minor.  “We work to promote events throughout campus.  We met with Laurel [Dube, Director of Campus Life] and learned that the same 20% of students are attending events. Our goal is to engage the current students at events on social media discussing the event, but also to reach those still in their dorm rooms,” shares Mahnken.

Senior Alex Hendricks is the “unofficial boss” of the Social Squad and takes a significantly different role than his fellow members.  He joined initially as a web assistant for the University, working with Lew to maintain the school’s website.  When Lew formed the Social Squad, Hendricks jumped on board.  He performs most of the back end work needed to keep all these forms of Social Media running smoothly.

This year, the Social Squad added a new element to the mix and Hendricks has taken a big role in this change.  “In addition to portraying community life at Saint Martins, the Squad is tasked this year with creating a strong internal community,” he explains.

The plan is to get the Saint Martin’s community comfortable with using social media tools, like Twitter (@SMUcampuslife).  If the students are on Twitter, the staff and faculty should be, too.

“We hope to strengthen every other department and office in the university to help them with communications in a social media age,” adds Lew.  To facilitate this goal, the group holds “Social Media Office Hours” where students, faculty and staff can work with the Social Squad members, learning the nuances of engaging effectively in social media.

The team is trained to understand Google Analytics and demographic marketing.  They pass that information along to community members in a useful and friendly way.

It’s clear that these students are serving Saint Martin’s University in a huge way but being a part of the Social Squad has benefitted them, as well.  “I feel like I have learned more about computer science, in this job, than I ever could have imagined.  The hands-on learning is invaluable,” says Hendricks.

Sanchez adds, “It’s interesting to see how an office works and how the faculty and administration interact.”

“As a business marketing major, it’s been interesting to learn how businesses and universities are utilizing social media as a major part of their marketing and communication,” shares Mahnken.  “I’m learning something new all the time.”

If you use Twitter, Facebook, or Instagram, interact with Saint Martin’s University.  Chances are strong you are tweeting with a member of the #Social Squad.  Their knowledge is benefitting the students and staff at the University today.  The experience will benefit them as they graduate and enter a world saturated with social media, which is here to stay.