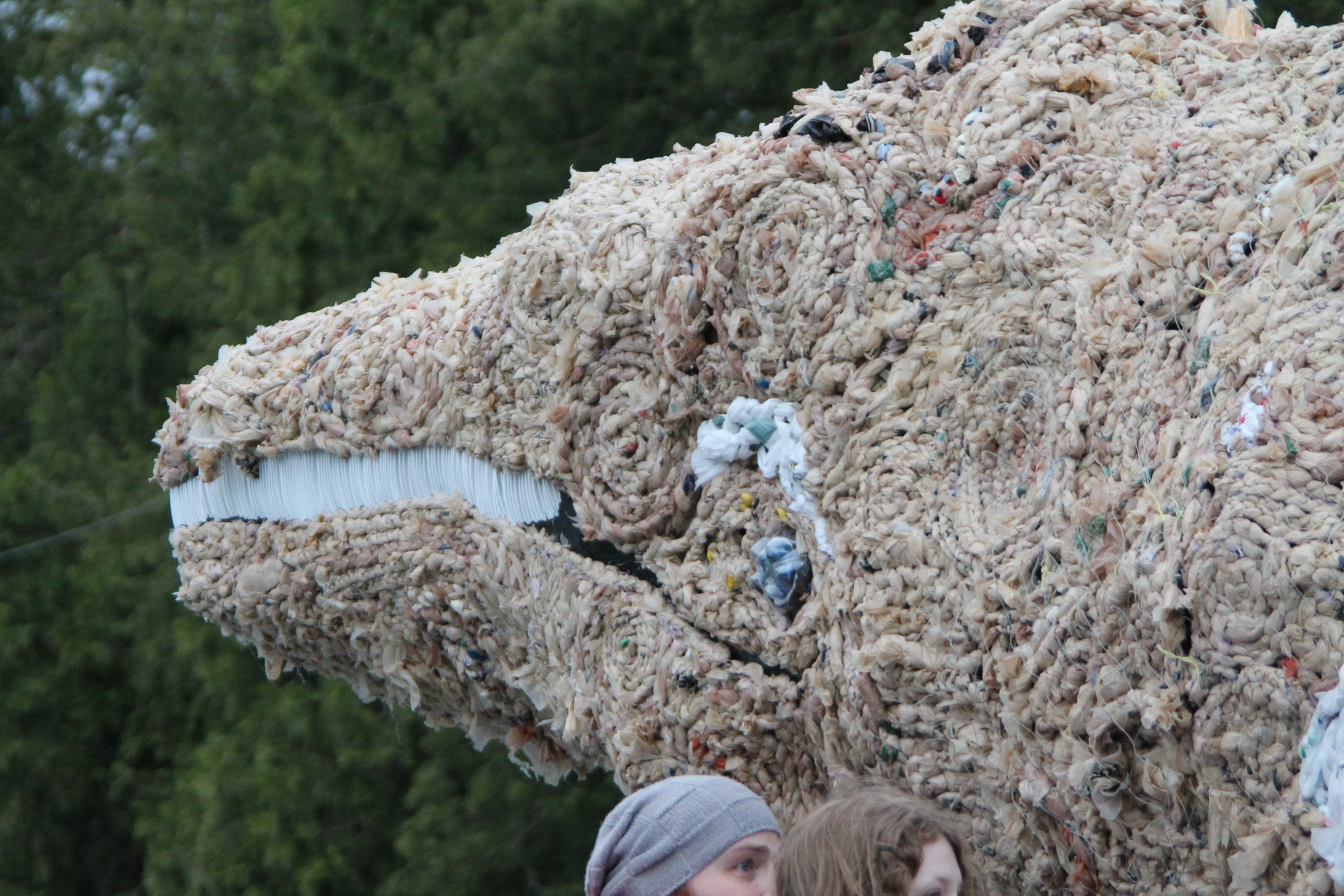 Olympia’s Carrie Ziegler combines art with her love of nature.  A professional muralist, studio painter and sculpter, Ziegler’s day job is with Thurston County Solid Waste where she consistently gets to combine her passions.

Ziegler’s passion and drive, along with the help she received from hundreds of local students and volunteers, will be on full display during the annual Procession of the Species on Saturday night in Olympia.

As part of Thurston County’s outreach about plastic bags, Ziegler and over 800 students from 18 schools and the YMCA’s after school program, Y Care, built a 35 foot gray whale that will be parading down Olympia streets on Saturday.

“The Procession of the Species is unique.  There is not anything else like it.  It’s a huge production that celebrates music, art and the diversity of life,” Ziegler said. “For me as an educator, it was the next step to utilize it as an outreach and education program.”

Beginning in January, Ziegler visited elementary and middle schools, where the students would donate plastic bags for constructing the project.  Over the course of four months,  9,000 total bags were delivered during school visits.  These bags were turned into 6,000 feet of plastic bag braids.

The braids, which would become the whale’s skin, were put together by NOVA middle school students.  One side of the whale will display a map of the Pacific Ocean, with the Pacific Gyre (the large collection of garbage floating in the Pacific Ocean) marked clearly in the middle.

The other side of the whale will be open, allowing Procession attendees to see the skeleton, skull and digestive system, which was created by a Tumwater High School advanced art student.  The skeleton was created from plastic forks and cups collected by the students, while the digestive system was made out of plastic bags.

Using styrofoam, bamboo and re-used poly-pipe, Ziegler and the volunteers from Procession Art Studio workshops assembled a three piece internal structure for the whale.  During Procession, individuals wearing jellyfish costumes, designed by Avanti High School’s Environmental Club, will accompany the whale.  Avanti students also used plastic bags to design the jellyfish costumes.  Ziegler noted that plastic bags, while floating in the ocean, look like jellyfish, and animals eat them thinking they are food.

After over 50, one-hour presentations at area schools, along with the countless hours put into the creation and production of the whale, Ziegler is happy with how the project has come together.

“For years and years, I have wanted to bring together my art and naturalist work,” Ziegler said. “It’s an ultimate way to bring together art, science and education and it combines so many different things as well: waste reduction, artistic community organizing, oceans, biology.  It’s a special project to me.”

Ziegler also added that through her work at Little Rock, the students became inspired to erect their own whale, which was created using soon-to-be recycled goods collected at the school.  The Little Rock whale will also be in the Procession, though at 20 feet, it will be shorter in length.

A project like this, Ziegler believes, shows that volunteers from different parts of the community can come together for a common and positive cause.

“I designed this program so that schools would be involved and so the community could help as well,” Ziegler said.  “It’s a testament to everyone involved and again, it’s just a special community event and special to be a part of.”

For more information on Zieglers work as a professional artist, including photos of the various murals she has painted in the Thurston County area, visit http://carrieziegler.com/