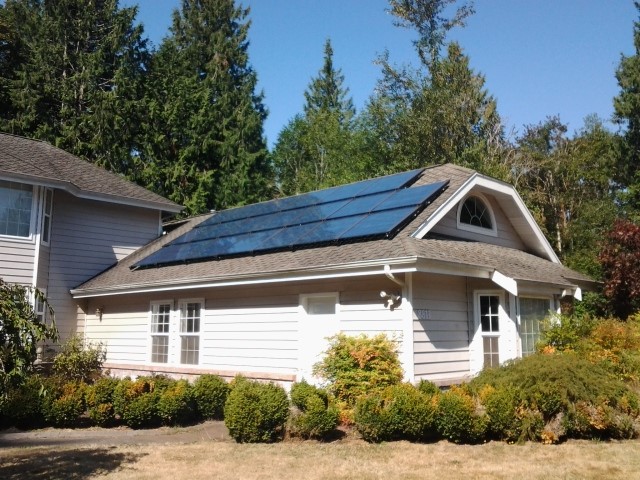 On a brisk fall morning Kirk Haffner and his South Sound Solar crew are at Jim Knowles’ house in the Boston Harbor area preparing to install solar panels on his garage. The house already uses green energy. It was designed and built that way five to seven years ago, Knowles says. The house is constructed with a system of overlapping panels that do not use studs for outside walls, thus saving loss of energy. Solar water heating is already in place, and there is radiant heat inside. Adding the Cascade Series solar panel system is just the next phase in a planned process, Knowles says.

Knowles says that when the work is completed he expects to cut his electric bill in half. “Plus Puget Sound Energy pays us and we get a kickback on taxes.”

Haffner is known around here as “The Solar Guy.” His crew on this November morning consists of Sam Winters, who has years of construction experience and has worked on many small businesses downtown, and Patrick Daly, who, when not installing solar panels, is a Masters in Teaching student at The Evergreen State College. Also on hand is Haffner’s daughter, Dever, who describes herself as the business’s office girl. “I do everything,” Dever says. “Billing, marketing, answering the phones.”

South Sound Solar usually employs a three-to-four person crew depending on the project, including electricians and installers.

Knowles’ panels will be installed on the south side of the slant roof of the garage where Dever says they will get maximum sunlight. First they must be connected to the electricity within the house and a separate meter has to be installed to measure the amount of electricity generated by the solar panels, which is important because the homeowner gets credit. “The homeowner gets a 30 percent federal tax credit,” Haffner says, “and he earns 54 cents for every kilowatt hour of electricity produced off the solar array. Because he will be producing his own electricity he will lower his utility bill.” He says homeowners will have payback from installing the system in as little as five years.

There is no clear lifespan on the lifetime of solar systems, but Haffner says they will easily produce power for 30 to 40 years.

Haffner has been involved in the green energy movement for 30 years. He used his Masters in Physics to conclude that solar is the best individual energy source for Northwest residences and businesses. Although South Sound Solar officially began in2007, preliminary work began earlier. “We started back in 2005,” Haffner says. “We took a couple of years to do all the research, and then we started with a bang in 2007.” Now he says, “Solar is all we do, because we know it works. We want everyone to go green, so our goal is to make the process as simple and easy for you as possible. That is why we do all the paperwork for you, and make sure you know all the great benefits that solar has to offer your home or business.”

Solar power works even in the gray winters of the Pacific Northwest, and even on cloudy days, although not at full capacity on cloudy days. It is more efficient in cooler climates. Users of solar energy earn federal tax credits and reduced Washington state sales tax, and their property values and equity increases. And Washington has a program called Renewable Energy Production Incentive that pays homeowners for all energy produced with solar panels.

South Sound Solar also installs solar water heating systems. The systems are freeze proof and will not overheat in the summer, and they require very little maintenance. The company says panels may need cleaning and fluid checked every few years.

The Cascade Series solar panels used by South Sound Solar work with high efficiency crystalline silicon cells that are strong and durable. They allow water, snow and ice to easily flow off and the mounting system hides and protects all wires for a clean look. The system comes with a 20-year limited power warranty and a two-year warranty on materials and workmanship.

Haffner will gladly consult with you on your energy needs and come to your home or business to assess what systems work best for you.

“Our solar experts have done hundreds of installs in the South Sound,” Haffner says. “Every South Sound Solar install ends with a happy customer. Our work, products, three-year warranty on all workmanship, prices, and our unbeatable customer service all make South Sound Solar the local choice for going green.”