Home Don't Miss The Association of Washington Business Kicks Off Manufacturing Week in the South... 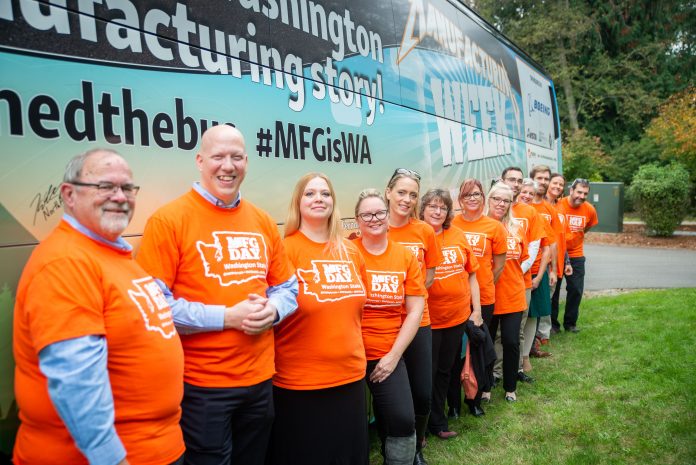 Throughout the week, the AWB advocates for the creation of new manufacturing jobs in the state while also acknowledging existing manufacturers who positively contribute to the state’s economy. The first day of the tour kicked off by passing through Centralia, Olympia and Lacey at the Lacey MakerSpace, located on the St. Martin’s University campus.

In addition to highlighting the importance of manufacturing for the state’s economy, the President and CEO of the AWB, Kris Johnson, says that throughout this year’s tour, the AWB also hopes to start conversations around incentives that would help manufacturers grow throughout the state, including tax rates and the cost of electricity.

Showcasing pathways to education is a third goal for the tour, since a skilled and educated workforce is necessary for a flourishing manufacturing sector within the state.

“It’s a great chance to see manufacturers really leading by example,” says Johnson. “Whether it’s high school internship programs or after school programs. By exposing any experiential opportunities to young people, they can see what does this look like? And they can ask, ‘what skills do I need to work in a place like this and what type of wages could I have in there?’”

“Lacey MakerSpace helps the idea of getting innovation and technology in our community,” says Deputy Mayor for the City of Lacey, Cynthia Pratt. “It feeds into helping the trades. It also helps develop people’s ability to create something without costing a lot of money.”

The AWB’s stop in Lacey enabled the organization to share the importance of manufacturing, not just for the state economy, but also for Thurston County’s economy.

“Right here in Thurston County, 3,400 men and women wake up every morning and go to work for a manufacturing company,” says Johnson. “I think, often times, people think manufacturing happens somewhere else besides here. It happens right here in places like Lacey, Olympia and Tumwater.”

To learn more about Manufacturing Week, the tour stops and the work of the AWB, visit the Association of Washington Business website.