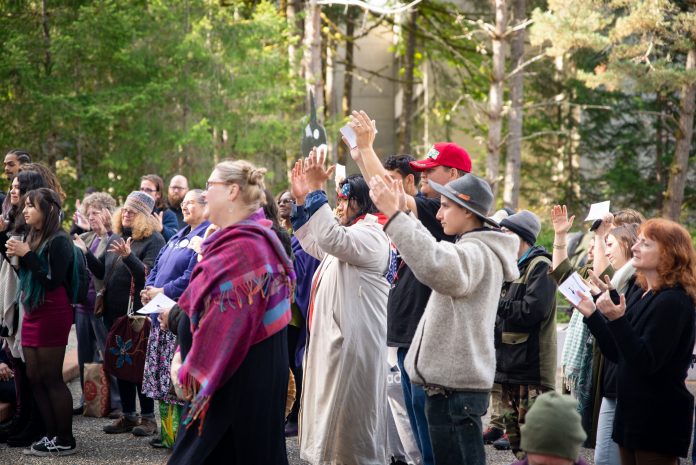 Upon the entrance to Red Square at The Evergreen State College, the “Welcome Woman,” a Native American carving, has greeted students entering the campus since her creation in mid-1980s. Originally carved by Greg Colfax and Andy Wilbur-Peterson, decades of wear on the carving’s untreated wood surface left the statue extensively damaged.

To save the carving, a restoration project was conducted by Colfax and Bunni Peterson-Haitwas, an Evergreen graduate and the daughter of original carver, Andy Wilbur-Peterson. The restored “Welcome Woman” was presented to a crowd of Evergreen students, faculty and administration at an October 2 unveiling ceremony.

Originally carved in 1984, the “Welcome Woman” was created in the entryway to the Evergreen library building and signified the dream to build the Evergreen Longhouse, which finished construction in 1995.

“When I carved it originally, Bunni’s father came to me,” said Colfax. “He was a student here at Evergreen and he asked to work with me, because he wanted to learn how to make big things.”

Since the “Welcome Woman” was never weather sealed, the outside conditions started to affect the carving, with notable features deteriorating over the years. When Peterson-Haitwas, began classes at Evergreen, she noticed the carving’s condition and campaigned to save it from further damage.

“She was looking so sad and her eyes weren’t hardly there anymore,” explains Peterson-Haitwas. “She barely had eyebrows. On the first day I registered for school here, I took a picture with my one-year-old at the time and the carving was completely weathered and sad. And so, I asked them if we can somehow get her restored.”

The college agreed to restore the “Welcome Woman” and recruited original carver, Colfax, to help complete the project. Colfax also invited Peterson-Haitwas to help him revive the carving.

“Enough people got behind the idea of fixing it,” says Colfax. “And it started off with Bunni talking to students, talking to faculty, talking to administration and then, the funding was found for it. From all of that, I was still around, so they brought me back to redo it again, which was pretty nice.”

Undertaking the carving’s repairs meant weeks of uninterrupted work for both Colfax and Peterson-Haitwas.

“They are 12, 14 hour days,” says Peterson-Haitwas. “So, I get here at like eight o’ clock and we work until at least eight in the evening for 35 days straight. I think I had one day off.”

Repairs to the carving were extensive, with a new statue base, head and arms added to the carving’s body. In addition to reviving the damaged areas, Colfax says the restoration project was also a chance to improve certain design elements from the original “Welcome Woman.”

“The drum was totally rotten,” explains Colfax. “I mean, it literally just fell apart in our hands when we took it off and then the head, I couldn’t save it. Then, I re-carved the head a little bit longer. I didn’t like the original one I built, in my personal opinion, so this one, I added six, seven more inches to its overall height and it made it a little bit more natural.”

After working for 35 straight days, the carving was fully restored, complete with fresh paintings covering the carving and long braided hair. To celebrate the renewed carving, Evergreen students, faculty, staff and community members gathered for the unveiling ceremony in Red Square on October 2. Several speakers and performers commemorated the “Welcome Woman” restoration, including words from Managing Director of the Evergreen Longhouse, Glenda Breiler and Evergreen faculty member Gail Tremblay.

With the restoration complete, “Welcome Woman” now stands at the entrance of Red Square, prepared to watch over students for years to come.

“I am so proud,” says Peterson-Haitwas. “I think she looks fierce. She is a protector. She is the protector of these grounds. She’s the one that welcomes us and keeps the bad spirits away.”

To learn more about the “Welcome Woman” carving and other projects at Evergreen, visit The Evergreen State College website.