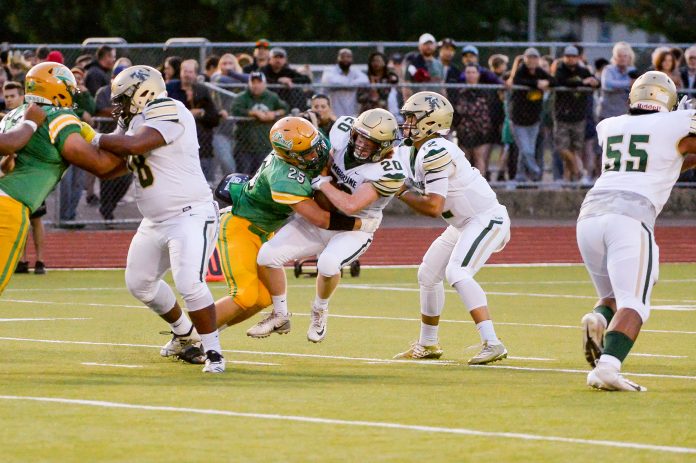 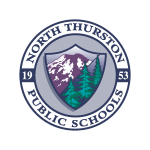 Timberline traveled to Tumwater District Stadium on September 6, 2019 to open the 2019 high school football season and were humbled 55-0 by the host Tumwater T-Birds. Leading 7-0 after the first half, the T-Birds dominated in all areas of the game with 23 first downs, rushing for 259 team yards and completing 155 yards in the air. The Blazers ran for 17 yards and had 48 yards passing with three interceptions. Tumwater led 27-0 at half and scored 21 points in the third quarter and another 7 points during the running clock 4th quarter.

Tumwater (1-0 overall, 0-0 EVCO) Coach Bill Beattie was happy with his teams performance. “I thought our kids came out and played typical T-Bird Football. We ran the ball well and the defense swarmed to the ball really hard. We have a lot of things to work on and a tough non league schedule moving forward with Yelm (Thursday in Tumwater) next week, 4A Bellarmine and then we go down and play 6A powerhouse Clackamas, but it was a great start.” noted Beattie.

For Timberline (0-1 overall, 0-0 SSC) they look to improve as they head to Sumner for a battle with Bonney Lake next week. Coach Nick Mullen was focused on improving in many areas and learning lessons as a team. “You never want to start like that, but this next week we will look at some things and we will get better.”

The WET Science Center is offering activities you can do at home! Every week there is a different theme to keep you curious about the world around you.
all-day What’s Blooming Around Budd? @ Online
What’s Blooming Around Budd? @ Online
Aug 4 all-day
Beginning Thursday, June 18 at 3 p.m. Follow each week as Pacific Shellfish Institute (PSI) dips their nets to see what plankton is blooming in Puget Sound and around our local lakes. Learn plankton identification[...]
5:45 pm Capitol Volkssport Club – Woodar... @ South Bay Market
Capitol Volkssport Club – Woodar... @ South Bay Market
Aug 4 @ 5:45 pm
This walk has a remote start. Meet at the South Bay Market to register, then drive to the start point at Woodard Bay Natural Resources Area. Walk leaves at 6:00 PM. The walk is a[...]
Aug
5
Wed
all-day Building through Play: Virtual K... @ Virtual Event
Building through Play: Virtual K... @ Virtual Event
Aug 5 all-day

This August, set aside time with your kids to—and for—play . It’s healthy, fun, and a great stress reliever. Then check in with the Child Care Action Council’s “Building through Play” event page (www.ccacwa.org/BuildingthroughPlay) for[...]
View Calendar

In the age of advanced technology and digital communication, Olympia Multi-Specialty Clinic (OMC) faced an unusual challenge: how to find an effective phone system...

A Day of Relaxation with Merle Norman Cosmetics, Wigs, & Day...

Marvin Road Overpass Reopens Ahead of Schedule as a Diverging Diamond...