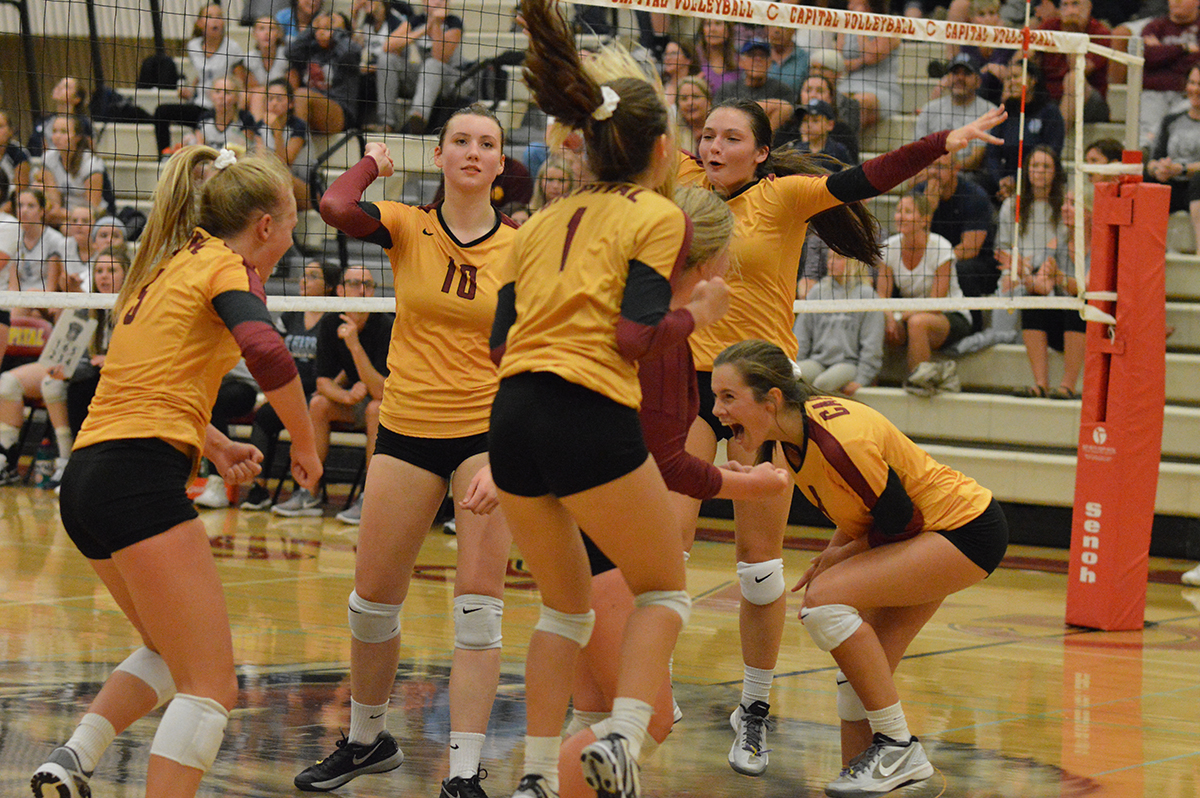 Elise Meath was quick to point out all the adversities facing the Capital High School volleyball team at the start of the season.

The team dealt with its fair share of injuries and were required to move players around in an attempt to find the right combination on the court.

Meath, a senior and the floor general for the Cougars, said the obstacles would only bring her team closer together and make them better in the long run.

Two months later and she now has a giant, shiny trophy as physical evidence of just how right she was.

Capital breezed into the Toyota Center in Kennewick as one of many teams with a legitimate shot at winning the Class 3A state volleyball championship, and left the Tri-Cities leaving little doubt who the best team in the state was.

The Cougars won their first state volleyball championship on November 11, 2017 by defeating Mercer Island, 3-1, in the championship finals, sending Meath and her five senior teammates out on the highest of notes.

Capital, which lost to the Islanders in a match for the third-place trophy last year, prevailed in the rematch (25-23, 14-25, 25-16, 25-14), getting a huge performances from sophomore Maia Nichols, who was named tournament MVP, and freshman Devyn Oestreich, who added 15 kills in the championship match.

Coached by Katie Turcotte, the Cougars finished the season with a record of 21-1.

After suffering their first loss of the season on October 4, losing at Gig Harbor (3-1), the Cougars closed out the season on a tear, posting a 14-match winning streak which culminated with their victory over Mercer Island.

They closed out the regular season by sweeping its final six 3A South Sound Conference opponents before carrying that momentum into the 3A West Central District/Southwest Washington tournament where Capital hammered 3A Greater Saint Helens League champion Prairie, which would eventually finished fifth at the state tournament, in the district semifinals and Gig Harbor, which claimed seventh place at state, in the district finals.

The Cougars split their first two sets against Snohomish in the opening round of the state tournament, winning the first game, 25-20, before dropping a 30-28 thriller in the second. They would put away the Panthers in four, closing out the match, 25-13, 25-11.

Capital was paced offensively against Snohomish by Maia Nichols, who registered 14 kills. The Cougars also received double-digits kills from Oestreich and Madison Nichols, who finished with 11 and 10 kills, respectively, while Grow dished out 17 assists.

Up next in the quarterfinals was defending champion Lakeside of Seattle, a team which bested Capital, 3-0, in last year’s semifinal before going on to defeat Mount Spokane to claim the 2016 championship.

This marked the fourth championship finals appearance and first victory for Capital. The Cougars were swept (3-0) by Auburn Riverside in the 3A finals in 2014 and dropped the 1994 finals in the 3A classification to Selah (2-1). The program also lost in its lone 2A title match appearance, losing 3-0 to Burlington-Edison in 2013.

Over the last 10 years, Thurston County high schools have combined to win five state championships with Capital joining cross-town rival Olympia, which won the 4A crown in 2011, and Tumwater, which has claimed a trio of 2A titles since 2008, as state titlists.

To complete the 2020 season Harlequin announces a six-week online radio series to run September 20 – October 31 2020. Productions will run for one week each premiering Sundays at 7:30pm PST with a run[...]
Oct
2
Fri
all-day Love Oly Shop & Dine Week @ Downtown Olympia
Love Oly Shop & Dine Week @ Downtown Olympia
Oct 2 all-day
Olympia, WA – Many restaurants and shops located in downtown Olympia are concerned that they might have to close their doors for good due to COVID-19. Now, the community has an opportunity to help. The Olympia[...]
View Calendar

Robot-assisted surgery is something residents of mid-sized communities rarely get to experience in the outpatient setting. Usually, they have to travel to larger urban...

The Historic Robin Hood Village Resort is Full of History and...