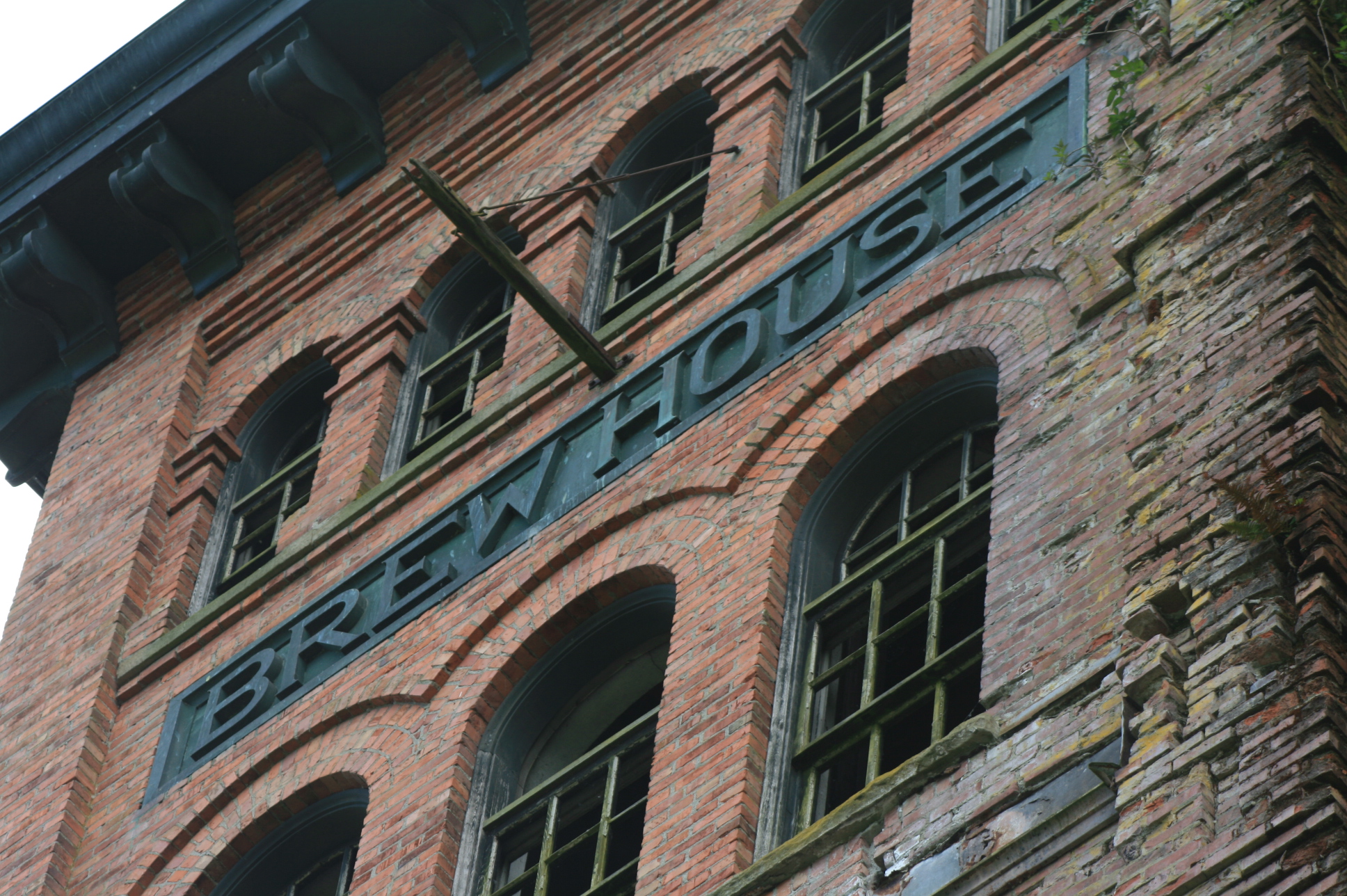 I remember Olympia beer from holiday picnics in the 1970s. My parents sat in aluminum lawn chairs sipping beer from stubby brown bottles while they watched their children play with metal lawn darts. It was a halcyon time for that generation. Olympia beer was ours—our hops, our water, our employer, and our legacy.

The roots of Olympia beer started well before Leopold Schmidt, founder of the Olympia Brewing Company, began brewing beer in 1896. In 1845, the pioneer families of George Bush and Michael T. Simmons left the Oregon Trail at the Columbia River and traveled north looking for farmland rich with promise. They found it in the area that became known as Tumwater. They brought all kinds of seeds to sow; history says one of those seeds was hops—flower cones that grow on a determined, climbing vine trained to clamber up strings. When the hops are aged and mixed with barley, yeast and water, the result is beer.

In 1895, it was the lure of the water that brought Schmidt to the area. On a scouting trip he discovered artesian wells of fresh spring water, welling straight up from the ground. Schmidt purchased five acres of land alongside the falls, sold his Montana brewery and packed up his family to head west. Two months after purchasing the land and in the midst of building the brewery, Schmidt sent two demijohns of the artesian well water to a German-owned, Chicago-based company asking for an analysis of its purity. The message came back and the company confirmed Schmidt’s intuition—the quality was impeccable. The slogan “It’s the Water” was coined in 1902 at the same time the name was changed from Capital Brewing Co. to Olympia Brewing Company.

The hops, water, and Schmidt’s expertise as a trained brew master combined to produce the first beer, the Olympia Pale Export, in July 1896, drinkable by October that same year. One more event occurred that increased the likelihood of the Olympia Brewing Company’s success. Gold. Miners found gold nuggets as large as a man’s fist in the Klondike and, in order for the celebrations to take place, beer was necessary. Schmidt shipped beer to gold rush towns popping up all over Alaska.

Beer produced by the Olympia Brewing Company was good. So good in fact, Schmidt decided his employees should be treated well and paid well. He charged double the going price for a barrel of beer and people paid it. Historians think about 200 local citizens were employed at the brewery around the turn of the century. At the top of its production, the Olympia Brewery produced 100,000 barrels of beer. Bottling companies had to be built in cities up and down the West Coast to keep up with the demand.

However, history can turn on a dime. Two events happened to set the Olympia Brewery Company back on its heels. Leopold Schmidt died in September 1914. Two years later, Washington State joined the Prohibition movement banning the production, transportation and sale of alcoholic beverages in the nation. Lost without their leader, employees were concerned about their jobs. Peter G. Schmidt Sr., Leopold’s oldest son, took over the reins of the company and desperately tried to hang on to the valued employees. The plant made fruit juice and jam, but it wasn’t enough to keep all of the employees working.

The Schmidt family worked their other investments, hotel chains, transportation, and timber while the Olympia Brewery was silent. In 1933, it came back to life, and that is where the legacy continued. Schmidt sent his team on a mission to find as many former employees as they could to restart the brewery. He decided to build a new plant at the upper falls of the Deschutes River leaving the stately old brew house on the lower falls from 1906 for posterity.

The new Olympia Brewery Company opened in January 1934 and entered its heyday as one of the longest running success stories in the beer industry. Peter Schmidt, “Uncle Peter” as he was known on the plant floor, was a bold leader. During his tenure, Olympia Brewing Company created a new, now iconic, bottle called the “stubby.” It held as much beer as the traditional bottles but was easily stackable, portable, and most of all, didn’t require a return bottle fee. In 1950, Olympia began selling beer in cans as well, thus bypassing the need for bottling plants. In the 1960s, a pull tab was added to the cans to increase the ease of opening the beer. The Olympia Brewing Company set the standard for all new innovations in the beer business until 1983 when the company was sold to Pabst Beer. When the Schmidt family left the business it felt as if the heart was gone from the brewery, although the plant did not officially shutter its doors until 2003.

Although beer is no longer brewed in Olympia, its iconic character lives on. Motorcycle stunt rider Evel Knievel had Olympia Beer patches sewn on his sleeve and parachute before his famous 1974 jump. Dustin Hoffman, Paul Newman and Clint Eastwood all featured Olympia beer in their movies. And, anywhere in town you can purchase Olympia Beer bumper stickers and t-shirts. The memorabilia reminds us of our younger years when life seemed simple—except for those metal lawn darts.

Visitors and residents alike can experience the history of Olympia Beer through free guided and self-guided tours in Olympia and Tumwater. The Schmidt House is located at 330 Schmidt Place SW in Tumwater. Free tours are offered on once a month on the second Tuesday at 11:00 a.m. with a limit of 15 guest per tour. Special group tours can be arranged by calling 360-786-8117 or via email at history@olytumfoundation.org.

Also check with the Olympia Tumwater Foundation to see if they have any tours covering Tumwater’s pioneer past, the history of the Olympia Brewery, and the salmon migration.