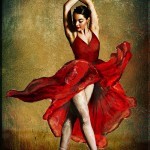 It is an Olympia tradition – for years Ballet Northwest has staged a ballet performance over Mother’s Day weekend. This year Ballet Northwest continues the tradition and is pleased to present the Olympia premiere of the classic ballet Don Quixote at the Washington Center for the Performing Arts on Friday May 8 through Sunday, May 10.

First presented by the Ballet of the Imperial Bolshoi Theatre of Moscow, Russia in 1869, Don Quixote is now a famous classical ballet performed all over the world, but mainly in larger cities. The story follows legendary hero, Don Quixote and his squire, Sancho Panza as they journey to find Don Quixote’s love – Dulcinea.

“It is very exciting that we are able to offer this performance in Olympia. It is so different from the other ballets that we stage. I love the Spanish flair, the use of fans, capes and tambourines. For our gypsy dance, we are having a flamenco teacher come. There is also a lot of comedy in Don Quixote, which makes it fun for audiences of all ages,” said Ballet Northwest’s co-artistic director, Ken Johnson.

In order to stage a ballet brand-new to the company, Ballet Northwest has been working hard on conceptualizing and designing a new set, costumes and choreography.

Jill Carter and Steve Bylsma are leading set design, working with a team of professional artists and volunteers to create a vibrant, sun-drenched tableau.

Local professionals and volunteers designed and created the costumes. “The costumes are new, built from scratch, though a few we were able to pull from past productions,” said Johnson.

There are 75 dancers from Thurston, Lewis, Mason, and Pierce counties performing in the ballet, and guest artist Josh Grant will dance as Basilio, a barber. Mr. Grant dances professionally with Pacific Northwest Ballet in Seattle. Anna Thorton will dance as Kitri, an inn-keeper’s daughter. Jim Eychaner will perform Don Quixote, an errant knight.

“We’re excited this year to have such a strong cast of local dancers, as well as such an experienced professional dancer like Josh Grant,”, said Co-Artistic Director Josie Johnson.

Ballet Northwest continues its rich tradition of outreach into the community with its Dance Literacy program, in conjunction with Don Quixote.

Co-Artistic Director Ken Johnson explained, “Over 900 elementary-age kids from the Olympia School District, Tumwater School District, and North Thurston Public Schools will be bused to a free student matinee abbreviated performance, followed by a question and answer session at the Washington Center. We pay for the transportation costs, supported by grants. This is a great opportunity to expose children to the arts.”

Don Quixote will be performed at The Washington Center for the Performing Arts in downtown Olympia May 8 through 10, Mother’s Day Weekend 2015.

Curtain time is 7:30pm on Friday and Saturday and 2pm on Saturday and Sunday. Tickets range from $14 to $30, with discounts available to students, seniors, and youth. Student Rush tickets are available one hour before curtain.

Tickets are available through the Washington Center Box Office at 512 Washington Street SE in Olympia or by calling 360-753-8566. Visit www.balletnorthwest.org for more information or buy tickets online at www.olytix.org