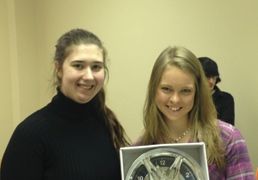 Representing Saint Martin’s were the teams of Matthew Tietjen and Evan Lake, Alyssa Hancock and Jessica Varvil, and Collin Silvernail and Garrett Jones. The students were accompanied by head coach Michael Artime, an adjunct professor for Saint Martin’s who teaches political science and a communications studies course.

The weekend included two tournaments. At the first tournament, the team of Hancock and Varvil compiled a record of 3 wins and 2 losses in the preliminary portion of the debate, earning a spot in the elimination rounds. In their quarterfinal round, they defeated a team from Western Washington University in a debate concerning whether the Supreme Court of the United States should overrule its decision in Burwell v. Hobby Lobby Stores, Inc.

In their semifinal matchup, they defeated another team from Western Washington University in a debate about whether or not the United States should withdraw all troops from Iraq and Syria. This meant that Hancock and Varvil earned a spot in the final round of the tournament against Western Washington. Varvil and Hancock finished in second place in the tournament. This was an incredible accomplishment considering that this was only the second competitive tournament for Varvil and Hancock.

In addition to the second place finish, it was announced that Saint Martin’s had 4 of the top 7 speakers, based on judge’s preference, at the tournament. Varvil was the third ranked speaker, Jones was the fourth best speaker at the tournament, Silvernail received the sixth place award, and Tietjen was seventh.

At the second half of the tournament, Hancock and Varvil continued their dominating performance, compiling a preliminary record of four wins and one loss. In their quarterfinal matchup, they defeated Western Washington University in a debate concerning whether or not the United States should approve the Keystone XL pipeline. In their seminal matchup, they lost to a team from Bellevue College on the question of whether or not the United States should end its trade embargo with Cuba. Hancock and Varvil followed up their second place finish in the first tournament with a third place finish in the second.

Additionally, Saint Martin’s debaters compiled an impressive array of individual awards. Varvil was announced as the fifth best speaker at the tournament, Hancock finished as the seventh ranked speaker, Jones was the eighth place speaker and Silvernail finished in ninth place.

“I could not be more proud of our students,” said Artime. “This was an incredible performance given that this was our second competition in this format and that our competition came from some of the most prestigious debate programs in the country. The result is a reflection of the student’s dedication and hard work. I was told by several judges and coaches at the tournament how impressive our students are and I could not agree more.”