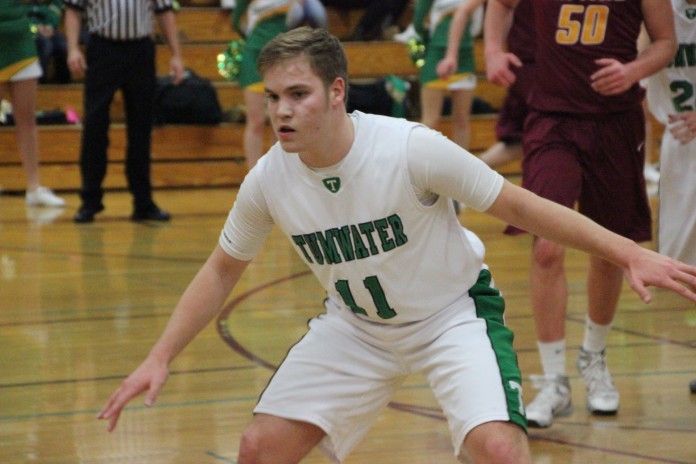 All good things must come to an end.

And yet, there are times where the good times keep rolling.

Dismay and exuberance were both present inside the W.F. West Gymnasium Thursday night, as Tumwater defeated Capital 57-49 in a loser-out 2A boys District IV tournament game.

Tumwater, who split the two regular season match-ups with the Cougars, were paced by junior David Cooper’s 22 points and received 15 more from senior post Zach DeLucco.

With the win, Tumwater advances to the district third place game, a winner-to-state loser out affair with River Ridge on Saturday night.

Tumwater would go on a 6-2 run to finish the game, highlighted by a Josiah Warner lay in with 25 seconds left that came off a blown full-court press assignment.

Though the game grew tight in the later stages of the fourth quarter, Tumwater never trailed in the contest and led by as many as 15 points in the second half.

The future is bright for a Capital team that featured only two seniors this season.

Capital had defeated Tumwater 55-49 in late January but could not scramble from the early deficit they built.

Tumwater will take on River Ridge for a spot in the 2A State Regional round on Saturday, Feb. 22 at Capital High School beginning at 7 p.m.