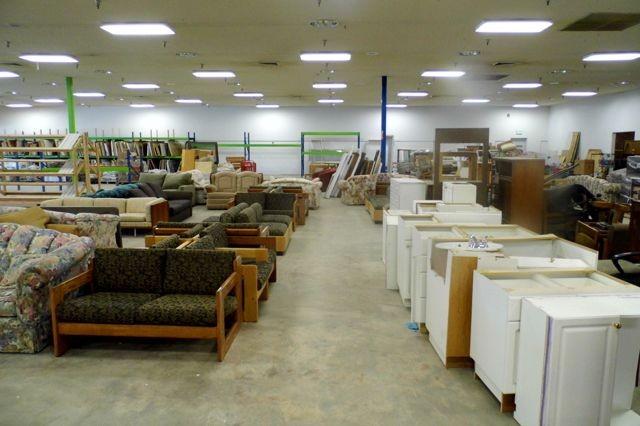 The hammers and saws have stopped.  The paint is fresh and dry.  Work crews are busy with last-minute adjustments.  Cabinets, windows and sinks are neatly stacked into rows.  There are couches and dishwashers, washers and dryers.  It’s an interesting parallel considering the organization.  The Habitat for Humanity Store is moving.

The new Habitat Store is now open, located in West Olympia, at the intersection of Cooper Point and Harrison, next to Goodwill.  The change of locations means greater accessibility and more parking.  The downtown Olympia building was an old warehouse which had uneven floors and no heat.

Curt Andino is the Executive Director of South Puget Sound Habitat for Humanity.  “A beat-up warehouse from the 1930’s really isn’t the future of downtown; boutiques, cafes, cultural draws and parks should be the staple of a modern urban waterfront environment. So, we figured we should go where many other successful retail businesses are,” says Andino.

There are more than 700 Habitat ReStores nationwide.  Their primary function is to provide funding for building houses.  “Fifty-four cents of every dollar spent goes right back into our building program,” says Olympia Store Manager Caleb White.  He adds, “that money stays in Thurston County.”

Most of the items at the Habitat Store are donated but Andino estimates that about 20% is new.  The materials are in good shape and affordable which attracts people who are remodeling their house or working on an art project.  “I go to the ReStore for pretty much everything,” says Ashley Emmett. “We bought a house earlier this year and it has been our go to place for finding materials to both update and restyle our home.”

Emmett, a mother of three, has other reasons for visiting the Habitat Store.  “I use lots of the materials you can find there for crafts.  Sometimes I just go there to find inspiration for new projects,” she recounts.  One of Emmett’s favorite projects started with a piece from the store.  “I have a love for fun light fixtures.  I turned an old brass chandelier into an amazing turquoise focal point in our kitchen.  It still makes my heart happy every time I see it.”

Ruth Peterson is an artist.  However, the 53-year-old comes to the Habitat Store for more than just supplies.  Her favorite part is the money her and her husband Andy save.  Peterson admits she’s “a tight wad.”  She also shops here “because I like using good used stuff.  It’s better than throwing it away.”

White says the Habitat Stores in Olympia and Yelm diverted about 1200 tons of potential garbage from the landfill last year.  He’s hoping that number will increase in the coming years.

Habitat is starting a new project called Building Materials Recovery.  One part of the program will include a drop off station at the Thurston County Waste and Recovery Station.  The other part is a potential boon for customers and for Habitat.  “Say you’re doing a kitchen remodel.  We will come and take out the appliances and cabinets for free,” says White.

Of course the materials have to be in decent shape.  So what does this mean?  Well, it’s a potential tax write-off for the donating party.  For the Habitat Store it means a greater selection and an increased likelihood that customers can buy complete sets of things they need.

The hammering and the cutting will start again.  Habitat volunteers will soon begin work on a 33 unit neighborhood on 37th Avenue in Lacey. The homes will be built thanks in large part to the Habitat Store.