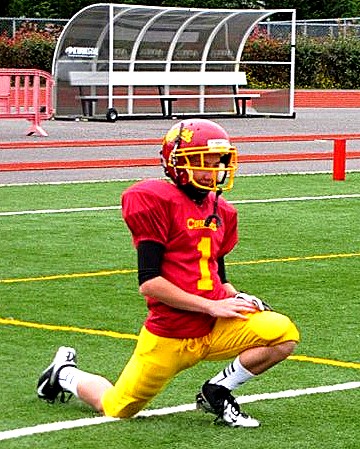 Lately, there’s been a name spoken at Capital High School in hushed voices. It’s the name of the freshman who became the starting JV quarterback and backup varsity quarterback. That name is Carson Bertelli.

Like many athletes, Carson started young. Many dads encourage their kids to join Thurston County Youth Football League (TCYFL) and Carson was no exception. He has loved sports as long as he could remember, and what better place to start with than football? He played TCYFL for all five years.

Carson has played TCYFL football since third grade, but it’s not just playing the sport that has helped him improve over the years. “My family has supported me a lot,” he shares.  “They’d go to as many games as they could, and help me clean out my gear.”

However, there’s one member of the Bertelli family that you may have seen around town at the TCYFL games. With her Bertelli sweatshirt, cardinal and gold beads, pompoms and megaphone, Carson’s grandmother is without question, one of, if not the biggest Cougar fans. “I’m not sure how it started, but my grandma would bring a megaphone to the game and cheer for the people on our team. She couldn’t remember everyone’s names and numbers so she taped the team roster on the megaphone and she has been doing that since 5th or 6th grade. She still has it. She always supported me and everyone in the team and even the cheerleaders with the megaphone.”

Surely, all the pressure of being the only freshman on the JV or varsity team has to be nerve racking? However, Carson, like every good athlete, has a method forkeeping a cool head. He puts himself into his favorite mindset. He says, “I try to do the same thing and treat each game the same way. I do what I can do to help my team win.”

When asked about siblings following his amazing football path, Carson is quick to give his brother the spotlight. “My brother’s name is Mason and he’s 12 and in 7th grade. He plays for TCYFL now. He’s an offensive and defensive linemen. But I can’t say he is going to follow my footsteps. He is going to take his own path.”

In this football player’s life, true inspiration has come on the basketball court. “Tom Crabill is a coach that changed my life. Not just as a football coach but as a basketball coach and like another father. He treated me as another son and helped me fix my attitude and make me a better person and I just looked up to him.”

Despite seeming like the perfect athlete, Carson still had challenges he had to overcome to get him where he is today. “I didn’t have the best attitude until 6th grade when I played on Tom Crabill’s basketball team. His son, Beau and I were the only 6th graders on the 7th grade team and he and Ron Robinson, my other coach, helped me get a better attitude. You can say just like doing it and fighting through and finishing strong.” 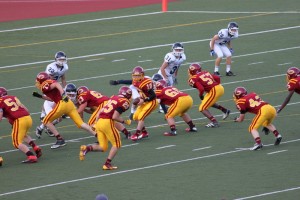 No matter the downs, the ups always outweigh them. Carson has a particular favorite, and rather spectacular up. “Winning the championship game in 7th grade is my favorite memory from football.”  And really, beating Tumwater after four previous championships to their name, who wouldn’t be excited?

We all have our dreams, and Carson is no exception. However, with little surprise, his involve a camp that trains rookie quarterbacks that want to enter the NFL.” I have always had the dream to go to John Gruden’s Quarterback Camp,” he shares.

Carson looks forward to a season of big throws and “wow’s” from the crowd.