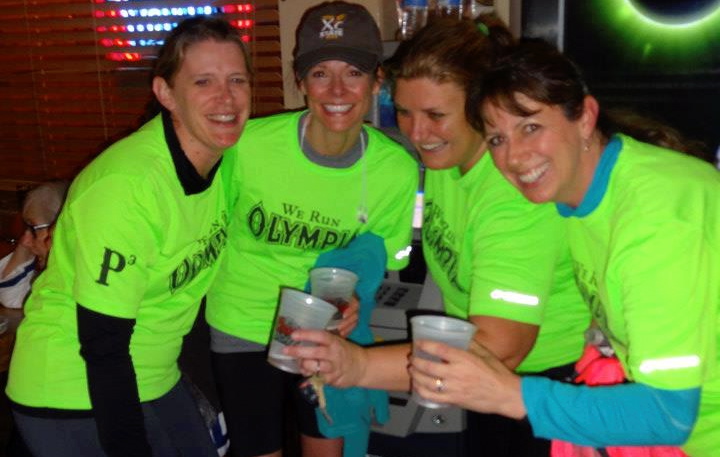 Thursday, March 14 is the “official” kick-off for the Pints’ Pavement Pounders (P3).  An unofficial group has been meeting on Thursday’s in the offseason and carrying on the tradition of 3 mile runs, cold beers, and good times. (Read my fall article here.)  I jumped into the action last Thursday night to run with the dedicated folks that have been pounding the pavement through the dark and rainy offseason. Don’t feel too bad for these folks, they get to end every run at the Pints Barn for a rehydrating beverage!

Lucky me, I show up and there was a new runner! I love new runners! Truth be told, I think he thought that last week was the kickoff night and I think he really didn’t believe I would talk his ear off the whole run, but he was a good sport about both. On the advice of his friend, Stuart Blocher showed up and was ready to tackle 3 miles and enjoy a refreshing beverage afterwards.

P3’ers are very low stress, no fuss kind of running folk. They offer easy to follow courses, friendly organizers, runners of all abilities and a welcoming atmosphere when you get done. They have locked down a recipe for running group success.

Now there are two types of new runners and Stuart falls into the category of “bolt out of the gate” runner. I seriously thought he stole something from the Pints Barn when we took off because he shot out of there like a bullet. We cruised through the 3 miles (yes, we even passed people) and talked about running, life, food, and friends. His buddy, Kain Kirkendoll, met us around the halfway point and ran us back to the Barn. That’s part of the P3 success. Friends just say “hey, meet me at Pints Barn, we’ll do a little run then grab a beer.” Who would say “no” to that? That’s how Kain got Stuart and Stuart will get the next newbie. It’s a running chain reaction!

But even the offseason runners need a leader and Terra Perkins stepped up to coordinate the routes this winter and keep the enthusiasm strong. Terra, like everyone in the group, is approachable and welcoming. If you are new to running, new to the area, or just looking to expand your running circle, join the P3 group!

Terra was kind enough to share her thoughts on running, walking, and P3.

What inspired you to encourage other runners and yourself to still meet at the Barn and run during the “off” season? “Before I joined the P3 runs last year, a group of my friends and I met on Thursdays for a run each week.  I encourage other runners to meet up with us each Thursday because even though I just love running, it’s so hard to get the motivation to do it alone…particularly when it’s raining outside!  Finding a good group of people to run with really makes a difference in how consistent I am in getting out there.  I also find that by growing friendships in the running community I have been able to get many of my running questions answered by other more experienced runners.”

What is your advice to folks new to running that show up? “Just do it!  It’s easy to worry that you won’t be ‘good enough’ to join a group, but the truth is that everyone has started just where you are and that the vast majority of runners are more than happy to lend a helping hand to those who are getting started.  The welcoming nature of running is what drew me in from the very beginning.  We’re all just so happy that you’re giving it a try!”

What was the inspiration behind the Couch to 5k Program? “Two years ago I was struggling with my own running due to putting too much pressure on myself to reach certain time goals.  I decided to get back to basics and lead a Couch to 5k Program.  Basically it’s a program that is designed for individuals with absolutely NO running experience.  It uses a run/walk approach that gradually increases the time and/or distance that participants run over multiple weeks.  It’s a fantastic, sustainable program that lets runners make and reach reasonable goals each week and NOT feel like they are dying each time they go out running.”

If someone were to have doubts about finishing a 5k, what would you tell them? “What I tell everyone is that ‘you can do anything if you give yourself enough time.’  It’s the truth!  My first 5k I ran/walked to the finish line and I wasn’t even the last one to finish! I got my very first race t-shirt. It’s one of the ugliest shirts I’ve ever seen in my life but I still have it!”

What has been the best thing for you about running at the Pints Barn? “What I love more than anything is P3’s welcoming atmosphere.  I heard about it from a running friend, who heard about it from her spouse (he doesn’t run) who heard about it from a co-worker!  How’s that for word of mouth?  From the very first run I was amazed at the wide range of runners coming out.  There was someone running at every pace imaginable!  Walkers too!  No one was left to run on their own, which I think is important when joining a group.  Who wants to drive somewhere to run alone?  Megan and Lyndsy have done such a great job making this group fun for everyone.  They’ve planned routes for each week, track all the people who run every week and have even managed to put together BBQ’s, raffles, Pub Crawls and even a ski trip!” 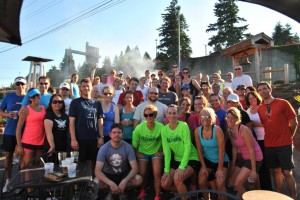 Terra also coordinates The Tortoise and the Hare Prediction 5K. The race is April 13 at 9:00 am at Marshall Middle School. This is a different kind of 5k that helps level the playing field for those runners who might not be the fastest runner but who are consistent with their pace and know just how fast they run!  Without the aid of watches, Garmins, Smartphones, or your mother, try and match your actual finishing time with your predicted time. Best match wins! It’s not about how fast you are…It’s how fast you think you are! All of the race proceeds benefit Marshall Middle School!

So get out there and pound some pavement! You’ll meet up with friends new and old and gain greater fitness in the process! Happy Running!

To read more about P3, check out this article.  Keep current with the P3 Facebook page.  Current routes and P3 happenings are noted there.