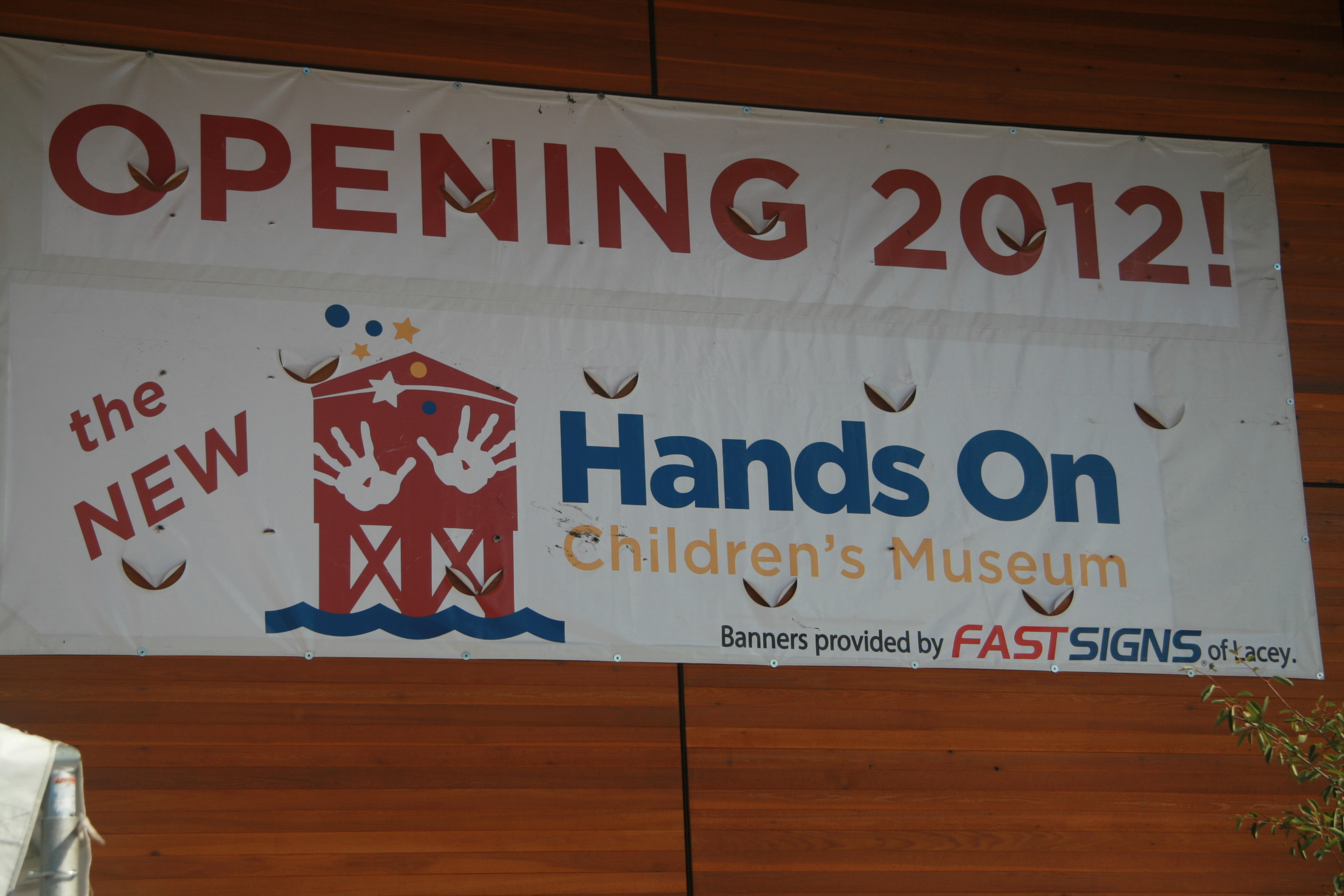 “It’s exciting and scary at the same time,” says Hands On Children’s Museum Executive Director Patty Belmonte, of this period just before the long-awaited museum opens its doors.

It’s taken years of dreaming, planning, and working to make it a reality. And in November, visitors can finally experience it all for themselves.

Belmonte says she’s most excited about sharing the building to which so many people have contributed.

“We’ve had such an outpouring of community support,” she says. “I’m really thrilled that so many people that have supported us for so many years will be able to see the results of their time and funds and many contributions.”

As for the scary part?

“We’re nervous about just getting everything completed before we open the doors,” Belmonte says with a laugh.

Judging by my recent visit to the museum, I don’t think Belmonte’s fears of not crossing the finish line in time will come to pass. Major progress continues to be made with huge installations in place in every space.

This visit felt very different from my two previous sneak peeks, mainly because all staff members are now comfortably ensconced in the new museum. The fantastic surroundings feel lived-in rather than prepped and waiting.

Adding to the higher level of activity (of the non-construction kind, which was background noise on both of my earlier visits) is the addition of preschool classes, which started in the new classroom spaces a few weeks ago.

I meet up with Hands On Children’s Museum Communications Manager Genevieve Chan, who gave me a quick tour of the space.

The first, most obvious change is the addition of the East Bay House in the Good for You! Gallery inside the museum’s front doors. Imagine a nearly life-size dollhouse for the under four-feet set.

“We’re going to have a little kitchen area here,” says Chan, as we step inside the wood-sided house. “We’ll talk about going from the market to the home and food preparation.”

A mural outside the kid-size abode guides the transition from the house to the backyard and toward the museum’s two-story climber and cargo ship area.

At first glance, not much has changed in this location. The frame of the climbing structure is in place and its lowest portion covered in barnacles (created, in part, from actual barnacles pulled from the Sound).

“A lot of things are still being built off-site,” says Chan, “and when they show up, we’re ready.

Nearby a new blue crane has been placed alongside the dock that will direct kids up into the massive cargo ship.

I see that the lights are turned on underneath the ship and crawl into the hull tunnel so I can see the water creatures Chan described to me on my last visit.

This make-believe underwater landscape is astonishing. Fish, crab, jellyfish, a sea lion, an octopus and much more seemingly float through the water, an illusion made all the more convincing by the use of lights that create a ripple-like effect. I could have stayed under there all day. I imagine the children who experience it will feel the same.

Chan then directs me outside to the just-constructed Naturalist Cabin exhibit. The rest of the outdoor exhibit will be unveiled next spring, but the museum wanted this structure built before next month’s grand opening.

“This will be a space for talking about nature and getting kids learning more about what a naturalist does,” says Chan. “We’ll have some Dr. Science programs in here, as well.”

We return inside and head into the emergency gallery, which now has two large structures under construction – one that will be a CSI-like investigation space.

“We’re expanding the series of professions that are going to be featured here,” says Chan. “We’ll have the Medic One van, a helicopter for paramedics, fire fighter station, and police station.”

This area will also see a rotation of exhibits from other cities come through from time to time.

Muralist Heather Taylor, whom I spoke with and watched work on my last visit, is wearing headphones, lost in concentration, painting a familiar Olympia streetscape: downtown’s Fourth Avenue, complete (so far) with Spar Café, Bamboo Restaurant, and State Theater.

Heading upstairs to the second floor, not much has changed in the Snug Harbor gallery, which still awaits the infant oyster bed and other tot-friendly exhibits. The familiar lentil boat from the old museum is now in place, as well as a lovely beach mural covering two walls.

Walking past the two-story climber’s top landing, my eye is drawn to a wonderful creek detail that’s been added to the floor’s design.

Christopherson Wood Floors worked with an artist to break into the wood flooring and add a blue acrylic that mimics a creek, complete with river rocks, which wends its way across the landing and down the hallway.

In the art room, two young women are hunched over, carefully inserting blue pins into what will eventually be a new pin wall – an updated version of the popular red wall that resided in the old museum’s construction zone gallery.

“It’s a lot of work,” says Chan. “And what’s nice about it is that everyone is having an opportunity to put pins in. It’s a nice metaphor; it means everybody is going to contribute and it shows the level of dedication we have.”

We walk into the Fabulous Forest gallery next, which has exploded in greenery and color since my last visit. The nurse log, which was in place last time, is now complete, the paint and details put in place. “The rendering is now more fully conceived,” says Chan. “It’s ready for the touch, too.”

Ferns and other native Pacific Northwest plants mingle among moss-covered logs cradling a fantastic water feature that details what’s underneath the rock and stone in area beaches and all the different levels. It also shows the transition from freshwater to saltwater.

A new mural beside the tree house of Mount Rainier and its reflection in a lake is a stunner.

The stage area is not yet complete, and other exhibits, such as the Squaxin Island longhouse still need to be installed, but a new building has been constructed next to the nurse log, which will house the Woodland Animal Rescue Center.

Overall, the space feels much closer to completion than on my previous visits, but it’s also clear that there’s a ways to go (hence Belmonte’s nervous laugh in our earlier conversation). Still, everything is firmly on schedule and the doors will fling open happily next month for a series of grand opening events.

The aforementioned members-only and public grand openings both follow a Public Partners Dedication on November 5 and an Educator Open House on November 7, from 4:00 p.m. to 7:00 p.m. for all public and private daycare, preschool, and elementary educators.

Visitors for both the members-only and public grand openings are strongly recommended to register online for a timed entry slot.

“We are expecting large crowds for Grand Opening and we hope that having timed entry slots will help with congestion and make people’s first visit to the Museum a pleasant one,” says Chan.

Folks will not be asked to leave within a certain amount of time; the scheduled entry times are in place simply so visitors won’t have to wait in long lines to get inside.

“They can have the time to spend and absorb what’s going on around them,” says Chan.

“The focus of the grand opening weekend will be all about seeing the building and the new exhibits,” says Belmonte. “We’ll have educators and special guests in the galleries to help facilitate the exploration – but really the focus is primarily on just exploring this wonderful new place.”

The East Bay Rooms will also be set up to celebrate the museum’s 25th anniversary with cake from Wagner’s Bakery.

Musical guests will also be on hand throughout the weekend’s grand opening festivities, including Samba Olywa, Planet Percussion, and more.

Belmonte says the six weeks following the grand opening will see many additional special guests and additional activities throughout the building, with free activities, fun-filled family events, and gift-making workshops.

Additional photos of the New Museum can be found here.