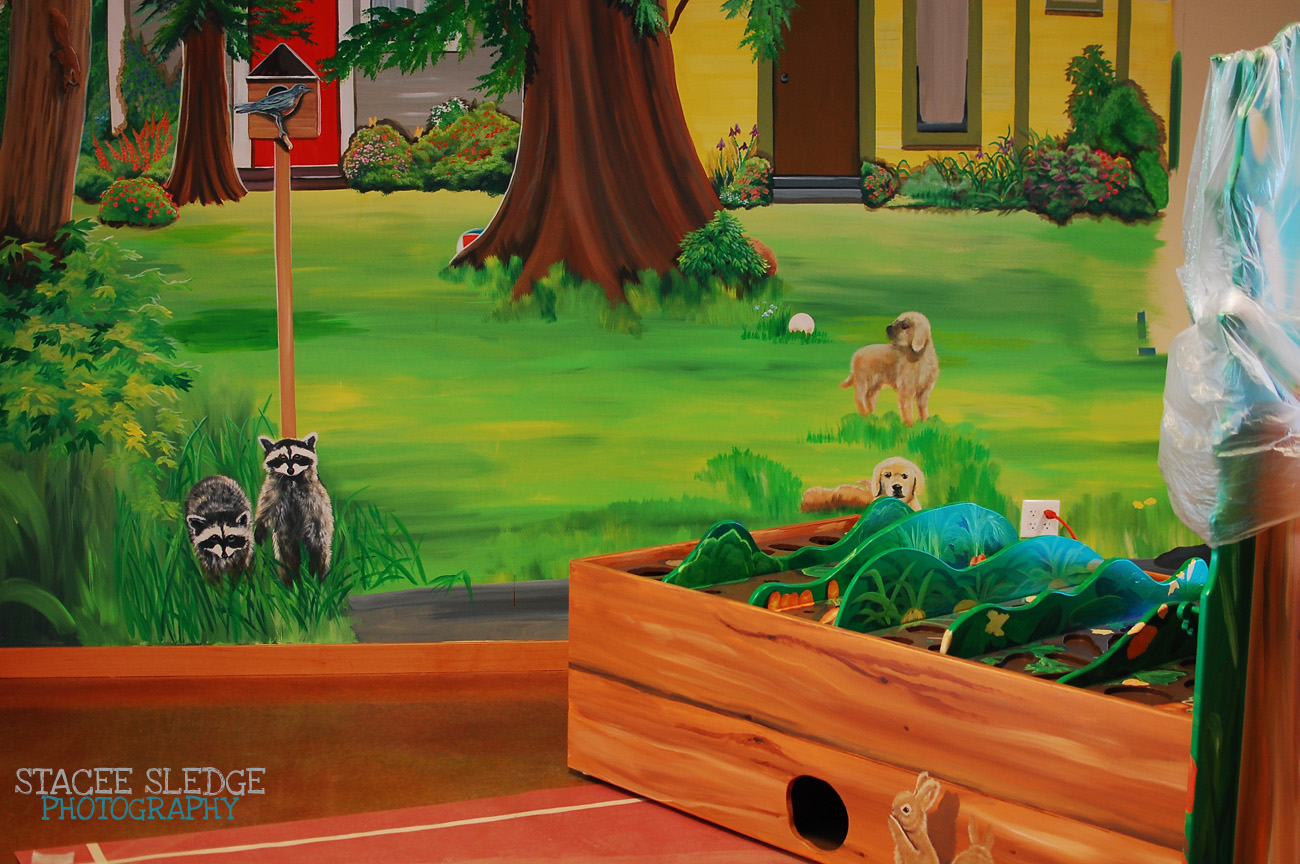 It’s been two months since my last look inside the new Hands On Children’s Museum. Things are changing and evolving in big, exciting ways.  (Want to see even more photos?  Click here.)

But first, a huge change outside of the new structure is that the old museum, in operation for nearly 25 years and at home on the Capitol Campus for 14 years, closed its doors for good on September 3rd.

When my 4-year-old daughter and I made our last visit to the old space in late August, it was a bit disconcerting to see entire exhibits gone – such as the Good For You market and grocery area, which had been completely removed and replaced with giant blocks. The carrot and potato garden was gone, as well as the apple orchard and chickens. I sat in the lonely delivery truck and watched her delight in the huge blocks. 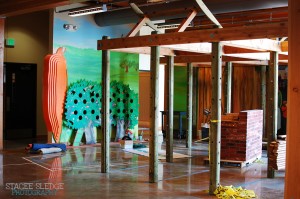 I stopped in at the new museum a few days ago to visit with interim communications manager Genevieve Chan and instantly spotted the familiar exhibit pieces strewn around the new Good For You gallery, some still wrapped in plastic. As Chan showed me the latest progress, I noticed a few other old favorites, already looking right at home in their new, much larger, more light-filled spaces.

“We’ve had a number of exhibits from the old museum already transported here,” explains Chan. “We’ll have another wave this coming week.” Employees will move over soon, with everyone in their new offices before the end of the month.

“With Kathy (Irwin, in charge of new museum exhibits and facilities) and the exhibit staff here, we’ve been apart for a couple of months,” Chan says. “It’ll be great to have everyone under the same roof again.

Highest priority on the day I was there was getting the preschool classrooms ready, with classes just a few days away from starting. “The preschoolers will be the first people occupying the building, which is great,” says Chan. 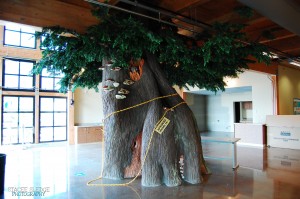 Walking through the museum’s new entry, visitors are greeted by an enormous man-made tree, complete with an owl peeking out of one cranny, mushrooms sprouting from crevices, and a walk-through space underneath that twinkles with fiber-optic lights.

New this time is the enormous green boughs above the tree, its trunk reaching through to the second floor, where it becomes part of a fantastic tree house in the Fabulous Forest exhibit.

The space behind the entry tree is still empty, but will soon be home to a café sitting area.

The large entry desk is unchanged from my last visit, incredibly long, gleaming, and ready for employees perched at it to welcome visitors to the museum.

Turning right as you enter is the aforementioned Good For You gallery, and past that is quite possibly the most striking addition to the space: the two-story Tide to Trees climber at the entrance to the Under the Pier gallery. 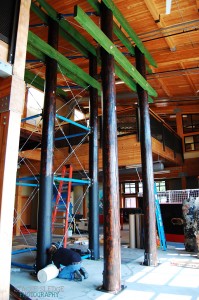 An intertwined stairway and climber, the massive structure lets kids climb up to the second floor through various eco-stations where they can see different layers and the different animals that occupy those levels. At the top is a beehive and eagle nest. A slide at the top makes for a fun descent back to the first floor.

“We’re going to have to see how kids play and how busy it will be,” Chan says of the structure. “We’ll make sure that’s monitored. It’s a wonderful way to have safe danger.”

Roll-up doors at the foot of the climber will be opened on good-weather days, bridging indoors and out.

And for younger children who may be intimidated by the large climber, there’s a smaller crawler upstairs.

Past the Tides To Trees exhibit is the Puget Sound gallery, dominated by an amazing tri-level cargo ship – three times larger than the previous museum’s ship – built by Seattle’s Portico Group. Museum staff worked closely with them on the design, basing it on actual photos from Puget Sound ships. The ship’s portals were also donated from real cargo ships in the Sound.

Kids can crawl through the lowest level of the boat and take in a glass-bottom display, with faux fish and even an octopus. Jellyfish will light up in the dark space. 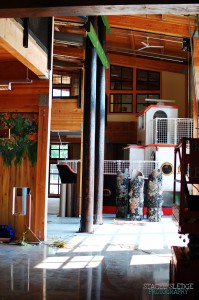 “We’ll also have a touch tank and different sort of table top displays that will change out from time to time so kids can experience real but also replica versions of sea life,” says Chan.

Barnacles on the pilings of the dock positioned around the harbor leading up to the cargo ship’s entrance and a mixture of replica and real barnacles taken from the Sound.

“It’ll be fun for kids to come here first, and then walk over to the actual piers and the boat works to see how things are translated in real life,” Chan says.

The next room is the Emergency gallery, which will eventually hold a fire engine, emergency room, 911 dispatch center, crime-solving lab, helicopter, police car, and more. But for now, the space is being used as catch-all for things that have yet to be put in place elsewhere.

This space will also change several times a year for special exhibits brought in from other museums around the country.

We head upstairs and take in the Snug Harbor gallery, a place for the very youngest visitors to simply explore and open their eyes to different, amazing things.

A lighthouse based on the Boston Harbor lighthouse looks over the large space, which will house a train table, climber, salmon bridge, Parent Resource Center, and more. 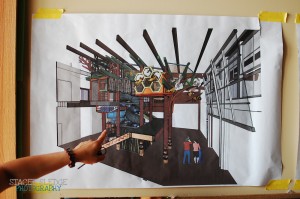 For now, the space is mostly empty, but a taped outline on the far corner shows where a fantastic-sounding infant oyster bed will reside.

“This area is for the really tiny ones, who are just starting to crawl or even just doing tummy-time,” says Chan. “There will be a waterbed effect in the mouth of the clam.”

Chan gives me a quick tour of the art room. The space will house a mountain of storage and modular tables that can be moved around in a variety of ways, giving the room different options for use.

As we leave the art room, I see a small window looking into what will be the Woodland Animal Rescue Center area of the Fabulous Forest gallery.

For now, it’s dominated by a gorgeous reproduction of a nurse log. “It’s basically a replica of what it would be like to walk through a fallen tree,” says Chan. “The artwork and detail, the level of accuracy is amazing.” 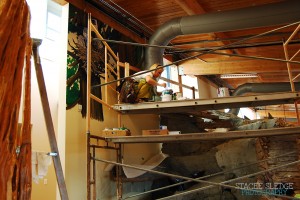 As we walk through it, I see a worker painting careful brush strokes onto the tree’s surface. Above, high on a scaffold, is Heather Taylor, the artist responsible for creating all the murals in the building. She was also responsible for all the artwork on the old museum’s walls.

I ask Taylor how she decides what to paint for each mural. The museum seems endlessly full of them.

“It’s very curriculum-driven. Like here,” she says, gesturing toward an owl’s nest she’s painting above the nurse log. “I’ll be given lists of different native plants and native species and I integrate it.”

For the longhouse near the nurse log, Taylor says she is essentially trying to integrate her murals with the structure, with direction from the Squaxin sponsors. “The tribe came up with different animals and plants that are uniquely important to them.”

There’s something comforting and instantly recognizable in Taylor’s murals – covering nearly every wall surface in the enormous galleries – and it ties the old museum to the new in a lovely, cohesive way. 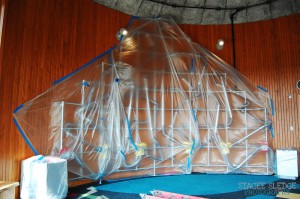 On our way to the Move It gallery, which occupies the massive turret visible from the street outside the museum, we stop at the finished tree house that ties into the main floor entryway tree. Chan says this magical play structure will be complete with a fairy habitat underneath, which overlooks the open first floor below.

The Move It gallery includes a massive ball wall – imagine the popular magnetic ball run at the old museum, but on steroids. The enormous wall is covered by a series of bendable tubes – everything was still wrapped in plastic, so I couldn’t get a close look at the details – that children can move and fashion into different configurations. They then insert foam balls of different weights and scarves and try to guess where they’ll travel along the maze of moveable arms.

“The Move It gallery is all about physics and motion,” says Chan. That will include a racetrack on the floor with ramps and pathways for cars.

The Build It exhibit is on the far end of the Fabulous Forest gallery, currently holding just a display of tools and the skeleton structure of what will be a construction area. Chan says that eventually the museum will punch out a space in this room for another crawl-through that will overlook the café area below. 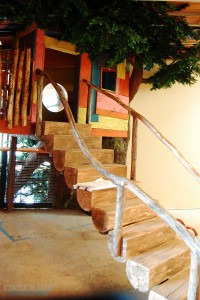 A quick glance into the two preschool rooms showed teachers and helpers getting everything in place for the quickly approaching first day of school. I spied a couple different pieces from exhibits at the old museum, repurposed for the preschoolers, including the puppet theater and the small hollow log that used to flow into the animal rescue center.

Seeing how much had changed in two short months was astonishing. I can’t wait to see what they accomplish in the coming weeks before the grand opening. It’s been a long road and this visit underscored for me just how much dreaming and work has gone into making what will surely be the premier children’s museum in the Pacific Northwest. 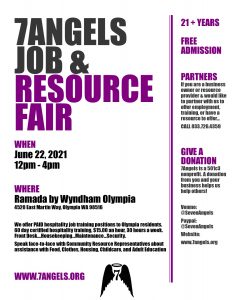