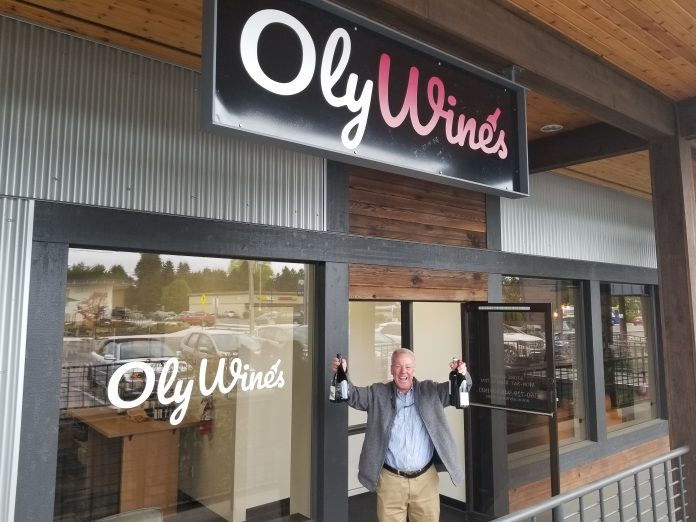 There are plenty of spots that sell wine – restaurants, wine bars, stores – but none offers “a wine journey.” This is what Ed Schlich promises at his newly opened shop, Oly Wines. Here you’ll find far more just vino. Oly Wines offers an educational experience in wine.

Ed is certainly the right person for the job. He entered the field right out of college and has spent four decades in the industry doing everything from pruning vines to selling wine for large distributors to being the cellar master – the sommelier – at high-end restaurants in New York City. During his near 20 years in France, he learned about grape varietals, the growing regions and the different methods of making wine. Ask Ed about rose wine, for example, and he can describe in detail not only the two wine-making methods, but also which is preferred and why.

“I got into the wine industry because of my passion for the arts at the time and I am not an artist,” Ed explains. “If I can do a stick figure, that’s a good day. So wine, I realized, was my art form and making it, explaining it to people and making it come alive through the glass, that is my passion.”

Oly Wines is his passion embodied. It’s a 639 square foot shop still early in its evolution but already reflective of Ed’s extensive knowledge of all things wine-related. A tasting table graces the entry to hold informal tastings as well as future-planned events. Shelves and tables filled with wines from all over the world line the walls. Near-term improvements include a transactions table and maps laid out by country or region where customers can learn about the areas the wines come from. Ed also plans chalkboards on the walls where he can write humorous idioms about wine. At some point, Oly Wines may feature a few beers, and possibly a delivery service.

Ed wasted little time in getting his store opened. He returned to Olympia last August after teaching English to business leaders in Colombia. Until he could open his store he provided a landscaping and pruning service, using skills he learned in the French vineyards, and worked as a sommelier at local restaurants. He finally realized his dream when Oly Wines opened on April 14, just eight days after receiving his specialty shop license from the state.

Oly Wines already houses more than 200 varieties of wine from five continents including such countries as France, Italy, Israel, Australia, Chile and Uruguay, to name a few. There is also a good bit of wine from another area Ed loves – the Northwest. “Washington wines are killing it on the national stage and for good reason,” he says. “The wines are big, juicy and smooth. The new consumers embrace them wholeheartedly.”

Despite Ed’s long background in the wine industry, he’ll be the first to tell you that there is always room to learn. Ed described a recent visit from a customer.

“(She says), ‘I’m from a wine club and there’s a wine from Italy that starts with a “v” that I’m looking for.’” At first this wasn’t enough to go on. “She comes back afterwards and she shows me a picture of a Valpolicella, so shame on me,” he jokes.  “If I was really good, I would have known it was Valpolicella from Italy.”

He didn’t have the wine from the picture in stock, but he had another Valpolicella available. “There’s nothing wrong with the wine she was looking for,” Ed says. “It’s from an excellent producer and I’ve sold it many times before. But the one I had in stock is the Bertani Valpolicella, in my opinion, is the master version.”

The customer agreed. “She loved it,” Ed said proudly, “and she’s been back for more and other wines too.”

Ed wants people to sample wines and plans to hold tasting events, but Oly Wines is not a wine bar. It’s a retail establishment with a generous side helping of wine education, courtesy of Ed’s extensive knowledge.

“We’re taking them on a journey, whether it’s red, white, rose, sparkling, fortified, it’s a wine journey. Hopefully they want to know more about a wine’s provenance,” Ed says. “And if they do, we expand on it and I tell them what they are interested in, I flesh it out with them.”

Oly Wines offers wine accessories from corkscrews to decanters as well as something for the true wine enthusiast: copies of Windows on the World Complete Wine Course autographed by Kevin Zraly, America’s top wine educator and Ed’s mentor. Ed worked with Kevin at Windows on the World restaurant, in the ‘80s and helped edit the first edition of the book.  “This wine book is arguably one of the greatest presents you can give anybody who’s interested in wine.”

Two grand openings are in the works, one on a weekday and another on a weekend, though no dates have been set.

When Ed gets Oly Wines furnished and decorated to his liking he’s planning a grand opening. But you don’t have to wait until then to stop by. It’s open now at 321 Cleveland Avenue SE, Suite 309 Tumwater Washington 98501 (right next to the Luxe For Style Hair Salon) from 10 a.m. to 7 p.m., Monday through Saturday.