Rob Kirkwood and Paul Knight are standing at the edge of Capitol Lake, arms folded admiring the changes at the Old Olympia Brewery Tower. “They put the flag back up this morning just to signify the resurgence of the restoration of the old brewhouse,” explains Paul. Both men fall into silence. “That’s a good thing,” Paul adds.

With a laugh Rob nudges him, “That’s progress.”

For Rob and Paul, any progress is good news.

These two are the backbone of the Old Brewhouse Foundation. Together, and with a handful of other community supporters, they have been working toward saving not only the tower, but also the keg house and three other surrounding buildings.

Paul is the last head brewer for the long-closed Olympia Brewery and Rob is a retired engineer who worked on numerous historic restoration projects for the parks department. Between them, they share a vision of the future of the brewery that does not include cookie-cutter shops or high-priced condominiums. Instead, they propose a public space where visitors experience history, art, and learning in a linked complex.

A Creative District Next Door to a Craft District

The City of Tumwater is creating a Craft District that could house various elements of the craft beer industry and has started work above Tumwater Valley. The city also owns the historic Brewhouse Tower and work is proceeding slowly on that iconic landmark, but the adjacent buildings remain an abandoned eyesore. Like many relics of manufacturing, the scope of the project is too much for most investors to even consider. Instead, the Old Brewhouse Foundation wants the investors to be county residents.

They are proposing a trolley link that would stretch from Percival Landing to Pioneer Park in Tumwater with the brewery acting as one of the main destinations for residents and visitors alike. Rob and Paul have spent countless hours reimagining this space into a creative district. Not only in private, putting numbers and proposals together, but also out talking to folks with their Old Brewhouse Trailer Display.

This exhibit is like a mobile mini-brewery museum with historical photos and memorabilia on one side and on the other a history of the Squaxin Tribe and their use of the waterway below and a smokehouse that was originally on the site of the Old Brew House.

Paul, Rob, and other volunteers visit festivals and gatherings across Thurston County talking with the community and gaining support for their project. The core of the group, Paul the brewer and Rob the engineer, both bring important elements to the project – one knows about the building and the history and the other how to renovate and reimagine it.

Just speaking with Paul, as he shares his knowledge of the Olympia Brewery and the local economy, is like a living history lesson. Interesting details are sprinkled throughout Paul’s conversations, like tales of the hops grown in nearby South Union and Chehalis Valley for use in Olympia Beer preceding those from Eastern Washington. “Now,” says Paul, “there’s a couple farms in Adna which are down west of Centralia-Chehails and they’re growing some barley for malting purposes. This week, we brewed some beer at Well 80 using malt from Adna.” Pausing, he muses, “Many parallels, different time, different volumes, different scale. But things are kind of repeating themselves.”

For Rob’s part, his work on historical sites that utilize existing buildings reinvented into vibrant and integral parts of the community is the basis for his vision. Anyone who has visited Fort Worden in Port Townsend (which Rob helped create) can understand the lens through which he views the Old Brewery, even in its current state. “I would like to see the community own it,” explains Rob. “Our concept is of a public gathering space, museums, art galleries, what we call quality of life facilities, that can be put into the brewhouse and the surrounding buildings.”

Time to Get the Facts

But patience seems to be key for the group, they have been working on this concept and presenting their ideas since 2005. Along with their proposal, they have been involved with stabilizing the tower and, with the help of other volunteers, hauling brick by the bucket to shore up the damage. While the tower is the iconic piece to the complex, the group sees the adjoining five acres as integral to their plan.

“The tower is only 10,000 square feet and it’s six stories tall,” says Paul, “very hard to rehabilitate, very hard to access. The rest of the facilities are 100,000 square feet. So we really need those other buildings.” The other buildings Paul is referring to include a warehouse, two storage houses, and the keg house. Including these buildings in their plan also creates a buffer for the tower. “The current owner would like to develop more buildings around that,” says Rob, “and we feel like the impact of the site would overwhelm the significance of the original structures.”

It is difficult to imagine now, with the beautiful backdrop of trees and foreground of water. But not impossible.

A Commitment to the Future

Both Rob and Paul were at the flag raising earlier that morning. “There were four from our group and four or five from the retired carpenter’s union,” says Rob looking across the lake. “We picked up three new members.” This is how their project has been building over the years. A person here, a sponsor there. Donation of building materials, the use of a crane, architecture plans, funding. Others see in these two a commitment to the future.

“An awful lot of America is based on our immediate returns and we’re talking about a facility that will be here for generations.” say Rob. “We’re actually doing this for our grandkids.”

The WET Science Center is offering activities you can do at home! Every week there is a different theme to keep you curious about the world around you.
all-day What’s Blooming Around Budd? @ Online
What’s Blooming Around Budd? @ Online
Aug 8 all-day
Beginning Thursday, June 18 at 3 p.m. Follow each week as Pacific Shellfish Institute (PSI) dips their nets to see what plankton is blooming in Puget Sound and around our local lakes. Learn plankton identification[...]
9:30 am Cork Boat Regatta @ Hands On! Children's Museum
Cork Boat Regatta @ Hands On! Children's Museum
Aug 8 @ 9:30 am – 4:30 pm 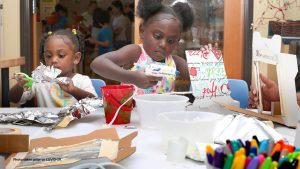 You might call it a luxury, others would say it is essential. I’ll say that experiencing a manicure or and a pedicure is a...