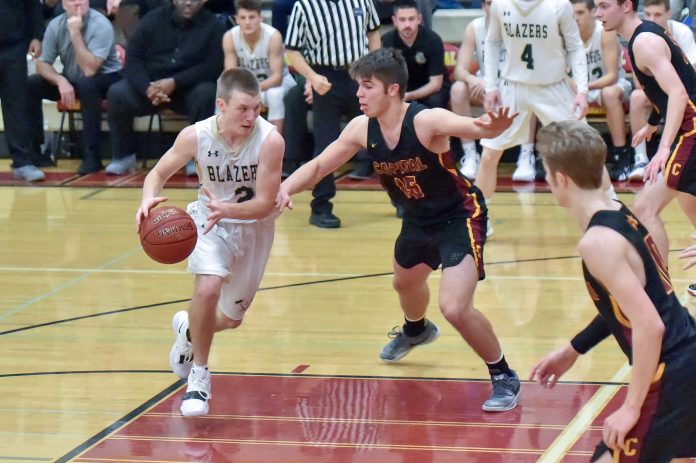 Senior guard Hunter Campau drove for a lay up with 1.8 seconds left to steal a 56-55 victory for the visiting Timberline Blazers Friday, December 7 at Capital High School. The victory for the Blazers (3-2 overall, 2-0, 3A SSC) puts Timberline in a four way tie for first place in the South Sound Conference. League favorite Capital (2-2 overall, 0-2, 3A SSC) played to its second straight one point defeat and will need to reset moving forward in league play.

Capital’s Chris Penner led all scorers with 24 points including two free throws to put the Cougars ahead 55-54 with 13 seconds left. Campau led Timberline with 22 points including his thrilling game winning drive. “We set ourselves up for our goal to win the league championship”, said Campau. Allen Thomas, Timberline’s head coach, was proud of his teams effort. “I thought it was one of the best high school basketball games I have coached in a long time. Our team was resilient even when we almost lost a seven point lead down the stretch” said Thomas. “Capital, they are just going to continue to get better. I think this league is pretty good top to bottom. Anyone can get beat on any night.”

Join Studio West Dance Theatre as we kick off the holidays with the return of our beloved Nutcracker Ballet November 27-30 at the Washington Center for the Performing Arts. We invite you to return to[...]
View Calendar