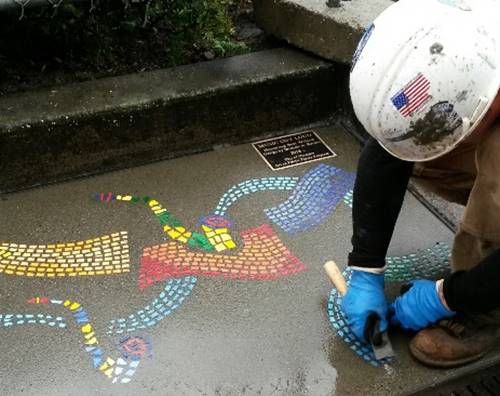 Music Out Loud is a project that posthumously honors musicians who have significantly contributed to music growth in the area or made a name for Olympia, through artistic design and music performances in downtown Olympia.

The first part of the project, three mosaics in downtown Olympia sidewalks, was recently completed. Designs by three local artists were fabricated and installed by Belarde Company, using a special process called LithoMosaic, which sets the mosaics directly into concrete. The artworks will be dedicated during Arts Walk with a walking tour on Saturday, April 28, from 12:00 – 2:00 p.m. in downtown Olympia. The tour will begin at 4th Ave. and Chestnut St., and will continue to 5th Ave. and Capitol Way.

The second part of the project involves live music. Each of these locations will become a living testament to music in our community, with 9 total acoustic music performances to be scheduled over the summer, in partnership with the Olympia Downtown Alliance.

Citizens were invited to submit names of deceased local musicians who were pivotal in the musical growth of the Olympia community and who met certain criteria, such as:

14 submissions were received. After deliberation by the Arts Commission and approval by City Council, 3 musicians moved forward in the process: Verne Eke, Steve Munger, and Bert Wilson. Through a separately held public art process, these legacy musicians were matched with artists Nathan Barnes, Michele A. Burton and Jennifer Kuhns.

At Merle Norman Cosmetics, Wigs, & Day Spa, owner Madelin White and her team of consultants are dedicated to helping each client find a...

Have A Weekend of Mystery with the UFO/Paranormal Summit at Quinault...